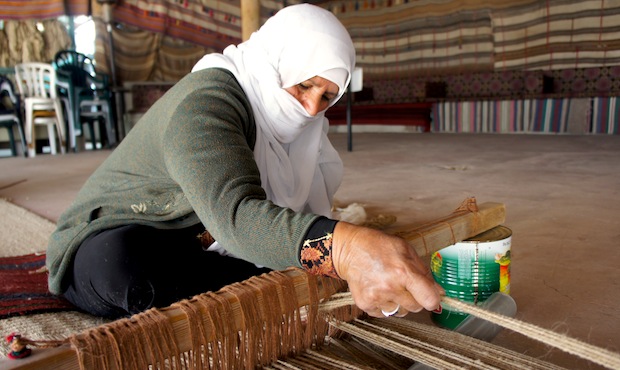 Deep in the dusty south of the Negev desert, Bedouin women are working hard to weave their traditional rugs, which are on high demand all over the world.

The Lakiya Weaving Center, made up of Bedouins living in townships and unrecognized villages across the Negev, employs over 70 women who work outside their traditional roles to support their families.

The centre was established in 1991 as part of Sidreh, a women’s NGO, which was supported by the New Israel Fund. The idea was to encourage these women who come from a nomadic background to integrate more into Israeli society, as 90 percent of them are illiterate and unemployed.

“We stopped living in tents because of the forced evictions from the Israelis,” she says. “The weaving tradition was about to banish, but because of this project, it is now reviving.

“We don’t want our tradition to fade away. With all of the modernizations of our culture and society, we are slowly losing more and more traditions. Weaving for us is our identity.”

The Bedouin population is estimated at 170,000, with the majority living in the Negev. Since the creation of Israel in 1948, over 90 percent of the Bedouins were displaced and lived in makeshift shafts and tents, which are still demolished by Israeli authorities to this day.

As a result, 80,000 of their population live in unrecognized villages but occupy less than 3 percent of the Negev. Residents of these villages don’t have access to running water, electricity and sewage systems.

The State of Israel also doesn’t provide roads, health clinics or schools because it deems these villages as illegal.

Bedouin women once played a dominant role in the household by working in agriculture and looking after livestock. After dramatic changes to their society, these women did not have the same social and economic opportunities because of their conservative culture.

Hala works to empower change for both the old and new generations. The 27-year-old thinks Bedouin women are becoming more determined.

“When a Bedouin woman gets an income, it’s not just about money to support her children but also the fact that she’s producing and making something herself, which gives her power to continue and develop and also make a difference in the house.

“While keeping this tradition alive, we are able to give a chance to women who have no formal education and most of them are illiterate, to work and support themselves. Their self esteem gets much higher.”

Workers keep the ancient Bedouin tradition alive by making rugs, blankets, pillows, cushions and spinning their own wool. With carpets and rugs on high demand, the weaving center is close to becoming 100 percent self-sustainable.

Every spring, pure wool is sheared from Awasi sheep provided by local Bedouin shepherds and spun onto a wooden spindle. After boiling the wool in a special dye, the women wind it and weave it over a hand-made loom.

Lakiya Weaving Center uses traditional Bedouin colors such as red, bright blue, olive green and black combined with traditional patterns to produce fair trade products, which are sold in Israel and all over the world.

Haiger Sana is a 58-year-old mother of nine and works in the weaving project. Originally, she aspired to be a teacher, but the lack of schools in the Negev and pressure from male family members prevented her from doing so.

Determined, she persevered with studying and became one of the first Bedouin women to learn how to drive. With her earnings from Lakiya Weaving Center, she supported her three daughters to get fully educated.

“When I lived in tents, I did not know there were people in the world who were not Bedouin and who lived differently,” she explains. “I witnessed all the changes that the Bedouin society in Israel has experienced, moving from tents to sheds and now to a modern house. I met people from all over the world through Sidreh and continue to learn new things.”

Conservatism has often clashed in Bedouin culture. Men and women are not seen as equal and as a result, the high unemployment rate among Bedouin women increases their dependence on men.

Women are forced to stay at home, because they are so illiterate and can’t do anything apart from carry out family duties in the house. Their inability to read or write makes it more difficult for them to find work.

Hala is working to ensure more women go to university, get educated and become more independent.

“Like almost everything in the world, the Bedouin women are changing, she says. “While things around us change, so do we. The role of a Bedouin woman was once bigger – when we used to live in tents the woman had a full partnership in the economy of the house with her husband. Today because of modernization, the Bedouin women lost that role.”

Lakiya Weaving Center was burnt down and a substantial amount of money was stolen when it opened. After being rebuilt, men in the community began to adjust to the idea of working women and slowly accepted the idea.

“Before, the men in our community didn’t like the idea of women working and succeeding in it.” Hala explains. “Now, when the men see how far we’ve reached, they are proud of us and when they have visitors, they bring them to Lakiya to show them our work. This is something we didn’t have before.”

Bedouin women are still undermined in both Israeli and their own societies.

“The high illiteracy and unemployment rates of Bedouin women are the results, first and foremost, of the failure of the State of Israel to provide them with a proper education and with sufficient employment opportunities,” says Barbara Swirski, director of Adva Centre, an Israeli research institute, which specializes in equality and social justice.

“It is the task of the State to provide the pre-conditions for economic security for all of its citizens, and the fact that we are talking about women who are Bedouin or women who may live in so-called “unrecognized” localities should not make any difference at all. The obligation is the same.”

Dropout rates for Bedouin girls are the highest in the country. This is partly because existing schools are inaccessible and difficult to reach for girls living in unrecognized villages and the result is that more than 50 percent of girls aged 15 and over are also illiterate.

When farming and herding were the main way of life for Bedouins, women played leading roles in the household and shared the role of breadwinners. Reviving the weaving can once more offer women their independence.

Hala remains optimistic about integrating Bedouin women into society so they can be independent.

“I can’t tell the future, but I do believe we’re going the right way forward. The women will flourish and get higher education and that way the community will change in a good way.”