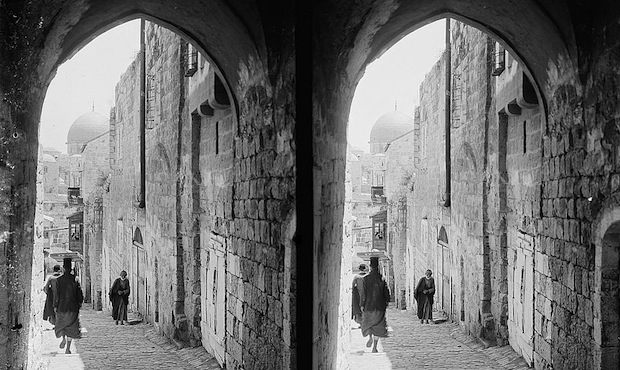 Considering the religious and cultural significance of Jerusalem, it’s perhaps not a surprise that the city would be one of the first locations ever captured on motion camera.

French brothers August and Louis Lumière invented one of history’s first motion picture cameras, the cinematograph, in the 1890s. Their footage of workers leaving a Lyon factory, filmed in 1895, is often cited as the first ever motion picture. The following year the brothers went travelling to capture the world with their revolutionary new invention. Jerusalem was one of their first destinations.

In Jerusalem, the Lumière brothers’ camera captured life in a city both ancient and in rapid transition. In the 19th century, the holy city grew from an Ottoman town of little real importance — notable mostly for its religious significance — to one of the key cities in the region.

Most notably, in the two decades before the French filmmakers’ arrival, the first organised mass emigrations of Zionist Jews from Europe to Palestine had begun.

Although figures on Jerusalem’s population and demographics during Ottoman rule are uncertain, and estimates vary considerably, it is clear that at the time of the beginning of the first Jewish aliyah to Palestine in 1882, the population of Jerusalem was only around 20-30.000 people. They were split more or less evenly between Muslims, Christians, and Jews, perhaps with a slight Jewish plurality. An estimate from 1882, quoted in Jerusalem and Its Environs: Quarters, Neighborhoods, Villages, 1800-1948 by Ruth Kark and Michal Oren-Nordheim, puts the total population at 21.000 people — nine thousand Jews, seven thousand Muslims and five thousand Christians.

But starting in the last decades of the nineteenth century, the city’s population would grow rapidly, especially its Jewish population. According to an estimate from 1896 — the year the Lumière brothers’ footage was taken — the city’s population had doubled in a very short time. And Jerusalem was now home to an overwhelming Jewish majority — of around 45.000 inhabitants, 28.000 were Jewish, 8.700 were Christian and 8.500 Muslims.

Unsurprisingly, Jerusalem quickly outgrew the ancient walls that had enclosed it for centuries. Authorities had to open up more gates in the city walls, and new neighbourhoods were built outside the walls to accommodate the growing population.

These years also saw significant improvements in many aspects of city life — areas such as public safety, administration, sanitation and education, thanks to both reformists among the Ottoman authorities, and European Jewish philanthropists, eager to support the city’s new Jewish immigrants.

Can we see evidence of these rapid changes in the Lumières’ street scenes from Jerusalem in 1896? Perhaps not. However, we can catch a rare glimpse of daily life from a vanished time. The locations are familiar — the Jaffa gate, the narrow cobblestone streets of Old Jerusalem — but the people have certainly changed.

We can see members of all the religious communities that inhabited the city — they seem to regard the foreigners and their unusual invention with equal suspicion or disdain. Some cover their faces as they pass by the camera.

Other Jerusalemites were more curious about this new technology, as can be best seen in this last clip from the Lumière brothers’ visit to the holy city. Here they film from a moving train as they leave for their next destination. A small crowd of curious spectators follows their departure.