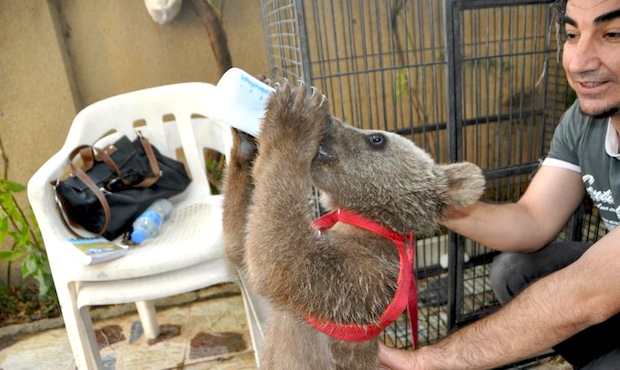 Bozo was a little bear cub of three months when he was sold at a pet shop last July in Sulemanya, Northern Iraq. Sitting in a tiny cage on the street outside the shop, he caught the eye of Iraqi film maker San Saravan.

Already aware of the pressing issue of illegal animal trade in Kurdistan, Iraq, he took an interest in the little bear, but as of then had no real intentions to do anything about it. When Saravan later told his Dutch friend Justine Grace Swaab, she suggested he should secretly record the way the cub was held at the petshop, and find out more about the background of the bear. Where did it come from? Was his mother still alive? Were there more cubs that were being sold? However, before Saravan could do any of this, it transpired that there was another potential buyer for the cub. Afraid that he buyer might mistreat the cub, or sell him on, Saravan decided to buy the bear, and to keep him at his house. Saravan felt that by getting the bear cub off the market, he was rescuing it from an potentially terrible fate. But by buying an illegally sold animal from a dealer, wasn’t Saravan – in spite of his intentions – actually part of the bigger problem of illegal animal trade in Iraq?

One of the major issues with animal trafficking in Iraq is that, with laws governing wildlife dating back to the 1970s, there is no effective legislation. This provides a fertile ground for poachers and dealers, and makes it easy to export and import wild species. Moreover, not even all of these activities are actually illegal, as under the regime of Saddam Hussein dealers were given permits to sell wild animals, and these permits are still valid today. While the current government acknowledges the problem, they freely admit that it is unlikely that there will be a proper solution in the near future.

With Iraq still recovering from the devastation of war, and currently going through (politically) tumultuous times, protecting wildlife isn’t particularly high on the government’s agenda. The lack of government regulation also means that no one checks where the animals end up after they are sold. Often, the people who buy animals like crocodiles or bears are not able to take proper care of them, especially when the animals grow up and become more dangerous. They become infatuated with a little bear cub, but when it starts to be unmanageable and perhaps attack people, they often end up killing the animal.

When Saravan bought the cub, he did so not out of infatuation, but out of concern for the animal. Nevertheless, the difficulties of having a wild animal at home remained the same. His friend Justine tells me that at first, Saravan gave the cub the wrong foods, like yoghurt and honey, which are far too high in sugar and completely unsuitable for a young animal. Another problem was where to keep the cub. Saravan had a garden, but the cage Bozo was kept in was much too small for even a cub. Bear cubs need special foods, space and shade, and under the circumstances, Saravan could not always provide those things.

Meanwhile, the filmmaker focused on getting media attention for Bozo’s predicament, and on creating awareness trough his campaign and a Facebook group, which attracted hundreds of followers. His friend Justine Swaab started to make contact with Iraqi wildlife organisations and international bear experts in order to find a place for Bozo, who was now steadily getting bigger and stronger. She encouraged Saravan to look for a suitable place for Bozo, in a bear sanctuary or a decent zoo. Unfortunately, Saravan and Swaab subsequently fell out, as they had very different opinions on what should take priority. Saravan looked to create awareness of the bigger problem, and Swaab wanted first and foremost to find a solution for Bozo. In her opinion, the campaign could wait, and Bozo couldn’t. Saab and Saravan also disagreed over what would be a good solution for the bear. Saravan was thinking about setting him free in the mountain region, East of Suleimanya, but Saab thought that Bozo would not survive as he was not used to living in the wild, and would not know how to find food and fend for himself. There was also the risk of Bozo being shot by poachers.

The problems Saravan and Swaab encountered while finding a solution for Bozo illustrate the issues that are also preventing Iraqis from finding a structural solution to stop animal trade or to save animals from the trade. First of all, there weren’t really many safe and suitable places for Bozo to go. Most zoos in Iraq keep their animals in terrible conditions, with animals being underfed, and kept in extremely small cages. There are no functioning wildlife animal shelters or bear sanctuaries, nor are there protected wildlife reserves. Apart from that, there is no central organization that takes on cases like Bozo’s, even though there are several independent and regional organizations that are involved in animal welfare or nature preservation. These organizations however, don’t necessarily work together very well, and many of the individuals involved are corrupt or have their own agendas.

In Bozo’s case, most of the organisations and individuals that were contacted didn’t even respond. One of the organisations that did respond, the KOARP, suggested it would take Bozo and bring him to a local zoo. After some research however, Swaab found out that there had been concerned visitors who had uploaded videos onto Youtube, of animals being mistreated in this zoo. Bringing Bozo abroad wasn’t an option either, as all bear sanctuaries in the surrounding countries were all full. At the same time, even if this would have been an option, it turned out that among the many supporters of Saravan’s Facebook group, there was a lot of opposition to sending Bozo abroad. According to these people, Bozo was now a Kurdish/Iraqi bear, and therefore should stay in Kurdistan. It appeared that for them, their own sense of nationalist pride or Kurdish identity weighed more heavily than the fact that this may not be the best solution for Bozo himself.

Meanwhile, Saravan had succeeded in getting a lot of media attention for his campaign, and there was even talk of a film being made about Bozo. He had not however, found the bear a suitable place to live yet. This was all to change when Saravan decided to visit the zoo in Baghdad, about 160 miles from Suleimanya. The Baghdad Zoo became famous during the 2003 American invasion, when it was left unprotected and most of the 650 animals died. However, after the violence had subsided the zoo recovered and it now houses more than a thousand animals.

Compared to the horrible circumstances in which animals in other zoos in Iraq have to live, Baghdad Zoo treats its animals well. While the infrastructure is archaic and nothing compared to the open, natural spaces of Western zoos, the cages are at least bigger than average, and the larger animals also have outside quarters. Having visited the Zoo, Saravan was reassured that this would be a good place for Bozo. The young bear would be taken care of, he would be safe and under supervision of trained staff, and he would not be able to hurt anyone when he’d grow big and strong. Fortunately, the staff at Baghdad Zoo were willing to adopt and take in Bozo, and on 20 September, Bozo packed up, and was moved to his new home at the zoo.

While Bozo’s story has a happy ending, there are so many more animals just like him who are being trafficked illegally. These animals all too often end up in tiny cages, they are exploited, unhappy and unhealthy, and in many cases, they are discarded or killed when their owners have had enough of them. To stop these practices, there need to be strict anti-trafficking laws, and these laws should also be enforced effectively. The current state of the country means that these issues at the moment – perhaps understandably – do not take any priority. It might take a long time for effective wildlife protection to be realized in Iraq, but it needs at least to be put on the agenda. While stories of animal abuse and animal trafficking might make it seem that Iraqis don’t care about the welfare of animals, the dedication of Saravan and the many Iraqi supporters and journalists show us that they do. It is thanks to these people that Bozo was saved, and it will be thanks to these people that hopefully, many more Bozos will get the same chance of a decent life.