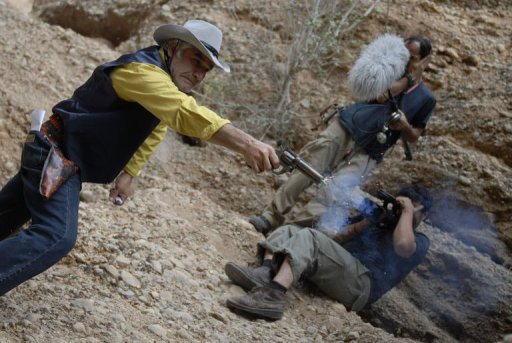 Negahdar Jamali is an Iranian filmmaker who has for the past 35 years made American-inspired westerns complete with cowboys and Indians in the deserts surrounding the city of Shiraz.

Poor and illiterate, Jamali has nevertheless dedicated his whole life to making more than 50 movies, often in the face of pressure to give up his dream from family and from the society surrounding him.

“I had always wished to be an actor,” said Jamali. “However no director would give me a chance. So I decided to become a director to make my own western movies and after a while I fell in love with directing.”

He funds the films through working, either wrecking cars at an auto lot with a sledgehammer or by selling costume jewellery from a blanket on the ground.

Then he recruits actors from the streets of Shiraz, convincing local market stall holders to donate feathers — sometimes plucked from live chickens — so he can make the Indian costumes that add a degree of authenticity to his decidedly low budget, B-grade productions.

Jamali’s story has been told in the documentary “My Name Is Negahdar Jamali And I Make Westerns”, which this week was given its world premiere at the Busan International Film Festival in South Korea.

“I wish when audiences see my real life in this documentary, they will see me as a good director who can make powerful westerns,” said Jamali in an email to AFP from Shiraz.

“I hope producers who watch the movie come to me asking me to make films for them.”

Jamali, aged in his 60s, chose not to attend the film festival due to the distance and worries about cultural differences he might face. The documentary was represented at Busan by its director Kamran Heidari.

“I found him an inspiration,” said Heidari of Jamali. “There is a level of dedication and professionalism in his work that you cannot find in mainstream cinema.”

At one stage in the film, Jamali says he has been obsessed with westerns since he was a boy, counting the late, great director John Ford (“The Searchers”, “Stagecoach”) as an idol.

Ford’s films — and his own — are about men who try to “remove the blanket of evil from the land,” said Jamali.

While “My Name is Negahdar…” might begin as an oddity it soon evolves into a moving tribute to a man who will let nothing separate him from his art.

“I almost fell into the trap of making a social documentary but then I realised that with this film cinema is the only thing that matters,” said Heidari.

“It is about a man and his love for cinema and for making cinema. His love for cinema is just so pure. He doesn’t want to make money out of them, he just wants to make these films and he puts everything he has into it,” he said.

“It’s inspiring and a lot more honest to just tell his story.”

While making a production called “The Great Revenge”, Jamali faces mounting bills at home, plus the ire of his wife and young son, and many in the local community who think he should be putting his family’s concerns first.

But he labours on, scraping together just enough money to pay his actors and for film stock. He eventually sees the production to its end and places handmade posters around town next to fading images of Iran’s religious leaders.

When the film premiered on a wall in a local square, an audience of around 20 gathered on carpets in the dirt.

“He makes copies of his films and then hands them out in the community,” said Heidari.

“It is a community effort. Everyone wants him to succeed and there is more and more recognition for what he is doing.”

Far from trying to stop Jamali’s work — which might be expected given its American nature and recent animosity between the two nations — the local authorities in Shiraz have begun to recognise Jamali’s contribution to the local community.

The free DVDs, screenings, and the work he gives to his crew of local “actors” have led to the director being handed some small awards, Heidari said.

The fact that the director was illiterate only became apparent halfway through the shooting of the documentary.

“He kept that hidden from us,” said Heidari. “He has papers with him to make it look like he is reading from a script but they are just drawings, like that of a child.

“But part of his great skill is his ability to improvise as the film is being made.”

“The Great Revenge” seems typical of the Jamali oeuvre — Indians attack, cowboys right the perceived wrong. But there is an unbridled joy in its simple delivery.

“His enthusiasm for cinema is infectious,” said Heidari, who chose to submit the film to Busan on the advice of respected Iranian director Abbas Kiarostami (“The Wind Will Carry Us”).

“Mr Kiarostami thought Busan would be a great place to introduce Jamali to the world.”

Heidari said he hopes other festivals around the world will pick up his documentary and said he had plans to help Jamali box up his films into a DVD collection, with the documentary included as part of the package.

Crucially, Heidari wanted to bring the filmmaker some attention — something Jamali was happy to accept.

“At first I thought I would be prepared to act in this documentary like my other western movies that I had acted in before,” he said.

“But afterwards I realised my life is not a movie role. I feel satisfied in the end that people will see this film, and see my real life.”