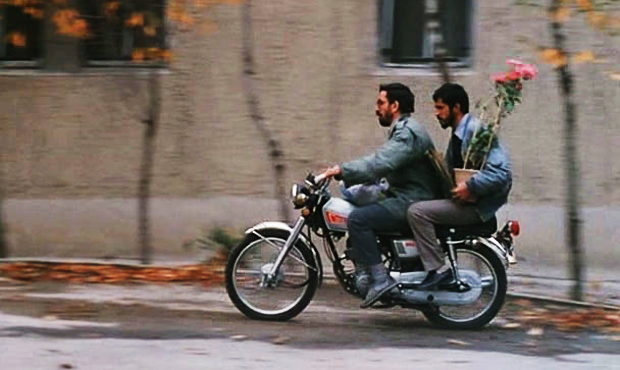 When A Separation became the first Iranian film to win an Academy Award, more people gained awareness of the country’s rich film legacy. Hamid Naficy, a leading authority on Middle Eastern cinema, lists a selection of his favorite Iranian films.

The House is Black (1961), directed by Forugh Farrokhzad
This is a documentary about the lives of the lepers in the Babadaghi Leper Colony near Tabriz–one of the few films about disability in prerevolution Iran. This was not a typical institutional documentary, however, as it did not laud the services of its sponsor, the Society for Assistance to Lepers, and it did not use the official documentary style (except in a brief medical midsection). In fact, it set the tone and became the model for poetic realist documentaries and their vision of “radical humanism”. The film begins with scenes of bitter irony in the classroom of the leper colony in which voice and image counterpoint each other to create a powerful third message. A boy whose fingertips have been eaten away by the merciless disease and another whose face and eyes are ravaged read out loud from a textbook:

“Lord, I praise thee for having given me hands to work / Eyes to see the beauty of the world”. In other scenes the lepers act like other people: they celebrate a wedding, put on make up, dance. This best poetic realist film by the foremost female poet of the last half of the 20th century, also manifested the parallel between writing poetry and film editing. A detailed examination of films she edited shows that she took a similarly careful approach to film editing as she did to composing poetry. Her written work is characterized by words that are highly evocative, atmospheric, emotional, sensorial, and corporeal. One of her coworkers at Golestan Film Workshop, Karim Emami, noted that many of her words “appertain to senses and the nervous system.”

Her words refer to the physicality of reality in the same way that each shot of a documentary—the type of film she made—indexes an external reality. In addition, her poetic realism stems from her working with each shot in her films as though it were a word in a poem, with great care and precision.

The Cow (1969), directed by Dariush Mehrjui
This is a fiction film about a villager who owns a pregnant cow, the sole source of milk for the village, to whom he is very close.  One day when he is town his cow disappears and his wife and other village elders decide to hide that fact from him, claiming that she had simply ran away. The villager does not believe this, but he is so traumatized by the loss of the cow that he gradually becomes the cow, assuming his identity, sleeping in the cowshed. The film helped bring about the new wave movement, which put Iranian cinema on the map of the world cinema. Based on a short story by a prominent writer and psychiatrist, Gholamhosain Saedi, and adapted for the screen by the UCLA trained director, the film inaugurated the theme of the return to authentic Iranian roots in the face of ersatz westernization then in vogue. However, it was also filled with the fear and anxieties of a modernizing nation under authoritarian rule—inaugurating another important theme of art cinema. It was banned for several years but after its triumph at the Venice film festival it was eventually released to great acclaim.

Close-up (1989), directed by Abbas Kiarostami
This film is about an ordinary man, an out of work print-shop worker, Hosain Sabzian, who is an extraordinary fan of the director Mohsen Makhmalbaf and his film The Cyclist. His identification with the director is both total and expedient, as he deftly impersonates Makhmalbaf for the entertainment of his friends and to impress strangers, among them Mrs. Ahankhah, whom he meets on a city bus. In this apparently simple story of the power of cinematic identification and fandom, culled from his social milieu, Kiarostami finds larger social and philosophical meanings, turning it into a sly humanist tale of a man’s desperate search for identity and dignity. If in the prerevolution era film directors were derided as sleazy entertainers, they are now stars, worthy of making a film about. Both Sabzian’s action and Kiarostami’s seminal film are examples late in the twentieth century of Iranians’ struggles through the years for individual self-empowerment and national self-representation by cinema. Sabzian defends his fraud on the grounds of increased “self-confidence” and increased “respect” for himself from others. The film also is one of the best examples of self-reflexivity in cinema.

The May Lady (1997), directed by Rakhshan Banietemad
In her phase one and two evolution as director Banietemad presented a rather conservative image of women, but in her phase three movie, The May Lady, she presents a more modern subjectivity in which the male and female characters both quote poetry to each other, some of it apparently their own. The film pushes the boundaries of female expressivity further by centering the story entirely on a female documentary film director who is a divorced single mother intent on pursuing her profession, on a liaison with a man to whom she is not married, and on raising her rebellious teenage boy who likes photography and partying. However, the film breaks more taboos than divorce, single motherhood, and unmarried relations. It expands the vocabulary and grammar of veiling in cinema by introducing fascinating mise-en-scène, filming, and narrative innovations. One of Banietemad’s narrative innovations is the way in which the male lover is simultaneously both effaced and inscribed in the film by means of a complex game of veiling and unveiling, as well as of voicing and unvoicing. He is visually absent from the entire film, but he is simultaneously present throughout by means of telephone calls, letters, and personal voice-over poetry. The film ties Iranian art cinema to the tradition of poetry, which is very strong in the country.

Kandahar (2001), directed by Mohsen Makhmalbaf
This was filmed in Afghanistan in Persian, English, and Pashtu, an example of Iranian multilingual and extraterritorial cinema that deals with issues and stories that occur in the Persianate world and culture.  Kandahar is about the return to Afghanistan of a Canadian Afghan expatriate, Nafas (Nelofer Pazira playing herself), to search for her roots and to prevent her sister from going through with her planned suicide. It examines the ravages of the wars against the Soviet Union and the Taliban. While doing so, however, the film aestheticizes and exoticizes Afghanistan in a visually stunning fashion, particularly the women, who wear confining but colorful burqas, and disabled men and children who have lost limbs. Particularly dramatic are scenes of scores of artificial limbs attached to parachutes being dropped from the sky by a plane and of the disabled men and boys running, limping, and crawling toward them. The film became famous because of its striking and exotic visualization and deft political timing, that is, the coincidence of the release of the film with the American-led invasion of Afghanistan and the ouster of the Taliban regime. It was also controversial because of its casting, involving an intriguing African American actor, née David Belfeld, who fled to Iran in 1980 after assassinating Ali Akbar Tabatabai, an Iranian diplomat and press attaché to Iran’s embassy in Washington who was an outspoken critic of the Islamic Republic. He played the doctor in the movie.