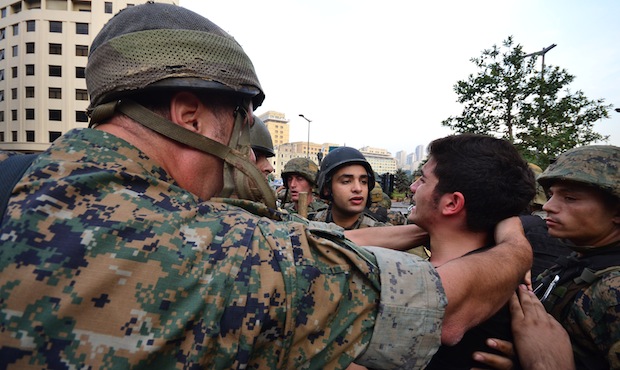 Lebanese police fired in the air and used tear gas on Sunday to repel protesters trying to storm the premier’s office in Beirut, amid calls for him to quit after a top security official was killed by a car bomb blamed on Syria.

Sunday’s funeral of General Wissam al-Hassan had been billed as a protest against Syrian meddling in Lebanon, but quickly turned into anger at Prime Minister Najib Mikati, whose government is dominated by pro-Syria parties.

Tension was also rife in the northern city of Tripoli, Mikati’s hometown, where clashes between supporters and opponents of the Syrian regime killed a 9-year-old girl and wounded eight people, security and medical officials said.

A statement on Mikati’s website said that more than 15 security force members were wounded in confrontations with protesters outside the Serail, the prime minister’s office.

It blamed the violence on “those people who provoked with their slogans and actions.”

A policeman told AFP an estimated couple of hundred “young people headed towards the building in the city centre, but security forces blocked them by firing into the air and using tear gas.”

During funeral orations for the slain police intelligence chief, angry former premier Fuad Siniora called on Mikati to resign, adding his voice to many others since Hassan and two others were killed and 126 wounded on Friday.

Siniora, parliamentary chief for opposition leader and ex-premier Saad Hariri, said the government was “responsible” for the death of Wissam and his driver and “must go.”

“Mikati, you cannot stay in your post to cover up this crime,” he said. “If you stay, it means you agree with what happened and what will happen.”

After Siniora spoke, a man mounted the podium and cried: “Enough speeches, let’s charge the Serail.”

Despite calls for him to quit, Mikati said he would stay on at President Michel Sleiman’s request to avoid a “political vacuum” in volatile Lebanon.

The opposition has widely blamed Syrian President Bashar al-Assad for Friday’s attack, as it did in 2005 when Hariri’s ex-premier father Rafiq was killed in a huge Beirut blast.

A banner on Sunday proclaimed “Two states, one revolution,” an allusion to the 19-month rebellion in Syria that has cost more than 34,000 lives.

After a solemn military farewell at Internal Security Forces (ISF) headquarters, the bodies of Hassan, 47, and his chauffeur were transported to Martyrs Square.

They were among three people killed and 126 wounded when the powerful bomb exploded in the mostly Christian district of Ashrafieh.

After the funeral at the massive Al-Amine Mosque, Hassan was buried in the mausoleum of his mentor, former premier Rafiq Hariri.

It was Hariri’s death, in which a Hassan-led probe pointed the finger at Damascus, that sparked an outcry which forced Syrian troops to withdraw from Lebanon after three decades of occupation.

Simmering tension from the Syria conflict has erupted into deadly fighting this year in Lebanon where the Mikati government is dominated by pro-Damascus parties such as Hezbollah and its allies.

In his hometown of Tripoli, the girl killed on Sunday was caught in crossfire between supporters and opponents of the Syrian regime, a medical official told AFP. A security official earlier said eight people were wounded.

Moin Merhabi said he would stay there until Mikati quits.

Elsewhere, young men angered by Hassan’s murder, some of them armed, cut off roads in the central Bekaa valley and along the coastal highway to south Lebanon.

Earlier, Martyrs Square was dotted with huge billboards praising Hassan and calling him “a martyr for truth and justice.”

Many people carried the flags of Lebanon and Hariri’s Future movement, while some waved the Syrian revolutionary flag.

Tamam Ali, a 27-year-old Future activist, warned: “It’s not just today. We were here yesterday and we’ll be here tomorrow and in the future.

“First of all, we want the fall of this government. We want the Syrian embassy kicked out and we want an end to Hezbollah’s power of arms.”

Hezbollah’s militia never disarmed after the devastating 1975-90 civil war and is Lebanon’s most powerful armed force.

Mikati linked Hassan’s murder to the August arrest of former minister Michel Samaha, who is suspected of planning attacks to provoke sectarian strife in Lebanon at Syria’s behest.

“After the discovery of explosives, logic dictates that the two cases are related,” he said, without naming Syria.

Under Hassan’s direction, the ISF played a central role in the arrest of Samaha at his home, where police found explosives investigators allege were to be used against figures suspected of backing Syria’s opposition.

ISF chief Ashraf Rifi on Sunday appointed a colonel, Emad Osman, to succeed Hassan. Osman had worked with him when he was head of protocol for Rafiq Hariri.