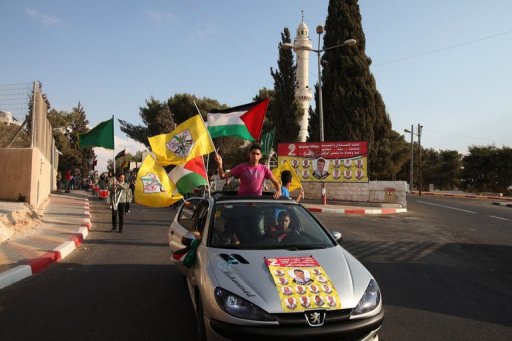 Palestinian president Mahmud Abbas’s Fatah party claimed victory on Sunday in local elections it expected to win in the West Bank, in the first such vote since 2006.

Fatah officials were openly jubilant ahead of the definitive results that are due out within 48 hours and even before preliminary results began to emerge, confident of a win in the long-delayed ballot which was boycotted by the rival Hamas movement which rules Gaza.

“Fatah won a victory in this election,” party spokesman Ahmad Assaf told AFP ahead of the official results. “Despite Hamas’s efforts, participation was good which proves that people reject Hamas policies,” he said, without elaborating.

Preliminary results which the Central Elections Commission began releasing in the evening showed that Fatah’s “Independence and Development” list alone secured 440 of the 1,051 seats being contested.

Several hours after the polls closed, supporters in the southern city of Hebron took the streets to celebrate their victory.

The last time the Palestinians voted was in the general elections of January 2006, which Hamas won by a landslide; the Islamist movement also chalked up major wins a year earlier during the last local elections.

This time, however, Hamas refused to take part following the collapse of unity talks with Fatah, leaving the Abbas’s party to face off with independents and leftist factions like the PFLP and DFLP.

Fatah’s success was due in part to its lists being carefully chosen, Assaf said.

“In some cases, they were 100 percent Fatah and in other cases we made a joint list with independents and other factions,” he said.

“Even though Hamas boycotted the elections, we feel that this election was better than in 2005 because the party was focusing on the services that people need.

“People went to the polling stations at their own, they weren’t forced which means they were looking for change and to improve their situation,” he said.

“People were frustrated with the political deadlock so in these circumstances, 54.8 percent was acceptable,” he told AFP.

With Hamas absent, the vote was largely seen as a test of discipline and the balance of forces within Fatah, which has struggled with internal division after 45 of its members ran on non-party lists, prompting their dismissal.

In the northern city of Nablus, Fatah won half the number of seats won by the rival “Nablus National Independent” list put together by party rebels, taking 5 against the breakaway list’s 10, according to the preliminary results.

“We are thrilled with what Fatah has achieved in these elections at a national level,” said Mahmud Shtayyeh, head of Fatah in the Nablus district.

“In the towns and villages around Nablus, we had the best results, but in the city itself there was a problem and we got five seats, while the rival list got 10,” he told AFP.

“We accept the result. This is a Palestinian democracy and we respect the results from the ballot box.”

Saturday’s vote was held in only 93 municipalities, as candidates in another 179 areas were appointed unopposed. Elections in the remaining 82 areas will be held on November 24.

But a statement from the Carter Centre observer mission of former US president Jimmy Carter said the vote was marred by limited competition.

“Although well-administered by the Central Elections Commission, the polls were marked by a lack of political pluralism and limited competition, with one major party boycotting the polls,” it said in a statement.

It also stressed the “urgent need” for Fatah and Hamas to overcome the “deepening rift between the West Bank and the Gaza Strip.”

Abbas said on Saturday he hoped Hamas would “let the democratic process take place in Gaza” but Hamas had only served to cemented the yawning divide between them, saying the results would have “no significance or legitimacy.”