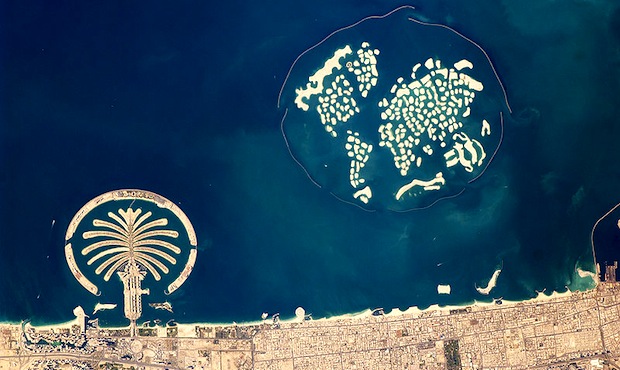 The Gulf countries are committed to attracting tourists to the region, going to great lengths (and depths) to bring travelers and the accompanying revenue to the area.

Private manmade islands are among the massive development projects designed to lure tourists out of the airport during their stopovers and into the resorts and beaches of the Arabian Gulf. However, the past year’s tumultuous political conditions and economic struggles call into question whether or not these ambitious projects will draw enough visitors to earn a return on investment that will allow the developments to float, which raises the question: will they simply sink back into the ocean?

The trend of building artificial archipelagoes in the Gulf began almost a decade ago with Dubai’s Palm Islands. The three palm-shaped islands were developed to be major commercial and residential attractions. Luxury resorts, restaurants and high-end retail stores seemed to rush to be a part of the unique project.

Initial promise prompted the continuation of the fad with the building of the World Islands, a collection of estate, mid-size and high-density islands roughly forming the shape of the earth. Early excitement surrounding the invitation-only World Islands brought about plans to add an additional archipelago, the Universe Islands.

In the past few years, global economic hardship has significantly slowed the rate of development and investment in these extravagant tourist attractions. In 2009, the market crash forced Abu Dhabi to bail out Dubai World whose subsidiary, Nakheel, is the developer of the Palm, the World and the future Universe Islands.

Dubai real estate prices tumbled over 60% from its 2008 peak reported Bloomberg Business Week. The drastic decline forced many of the grand development plans for the islands to be indefinitely postponed. Up until a couple of years ago, the only development on any of the World Islands was a model home built on the Greenland island by Dubai’s ruler Sheikh Mohammad bin Rashid al-Maktoum.

Adding to an already difficult investment environment, the World Islands developer Kleindienst Group reported to Arabian Business in early 2011 that the islands will erode if they remain undeveloped.

Shortly after the islands were reported to be disappearing back into the ocean, a UK- based developer announced that a $653 million investment in the World Islands was to be canceled and the group was looking to sell its islands (Finland, Sapporo and Kathmandu).

Those are not the only islands up for sale. Just a few months ago, Emirates 24/7 reported that a UAE-based real estate agency had put several additional World Islands on the market. Initially, the islands ranged in cost from $20m to $50m. Arabian Business reported that Finland, Sapporo and Kathmandu were being offered for $17m, $21m, and $15m, respectively.

The artificial island communities have seen recent signs of a recovery. Nakheel is working on its first major development project since the 2009 bailout. The Pointe at Palm Jumeirah will be an opulent retail, restaurant, and relaxation destination replete with synchronized dancing water fountains. Nakeel’s website assures that “if not arriving by private boat, access to the complex will be easy and convenient.”

Kleindienst’s Heart of Europe project, covering the islands of Austria, Germany, Netherlands, St. Petersburg, Sweden and Switzerland, is still moving forward though significantly behind schedule. Each island is designed to resemble, in some way, its namesake country. For example, Austria will be constructed to sit on a hill, while, the development’s website reads, Sweden will have a “climate-controlled raining road.” Other features of the project include six lighthouses, six hotels, underwater villas, and, of course, a half-dozen “floating palaces.”

Earlier this year, the Kleindienst Group opened its development on the Lebanon island called the “World Island Beach Club”, according to The National. The Beach Club was designed to be a destination for the World’s yachters where they can escape to a quite beachside cabana with butler service.

Prospects for tourism over the coming year seem promising. The Arab spring has shifted would-be tourists and regional vacationers from Egypt and the Levant to the Arabian Gulf. However, as Gulf News indicates, the boom in hotels in the Gulf has created a surplus in hotel vacancy. So, while an increase in tourism is anticipated, it is unlikely that the hotels would be filled to their maximum capacity.

The real estate crash was undoubtedly a huge setback for the grandeur planned for Palm, World and Universe Islands. Recent developments and an expected rise in tourism indicate that the archipelagos are unlikely to descend completely into the Arabian Gulf waters. A full recovery, however, will be slow and painstaking, requiring the patience on the part of wealthy investors and developers.

Nakheel is wise to hold off on plans to create the Universe Islands with so many of the World’s islands still uninhabited and undeveloped. In the meantime, the few Palm and World projects will offer plenty of amusement for travelers headed to Dubai.