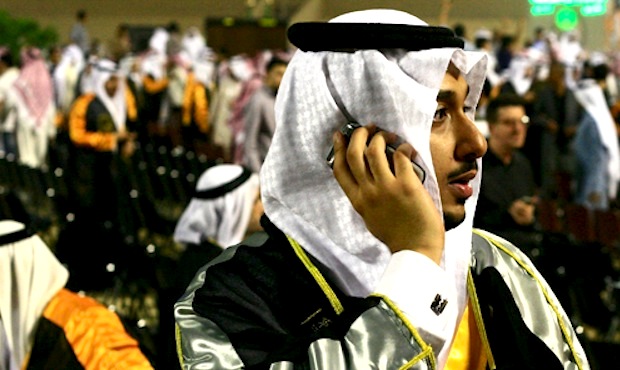 On the 20th of October, The New York Times published an article entitled “Saudis Cross Social Boundaries on Twitter”. It pertained to Saudi Twitter users and their apparent lack of fear when critiquing the archaic, corrupt and dysfunctional nature of the Saudi state.

The article affirmed that “open criticism of the state has long been taboo in Saudi Arabia. But after the Arab uprisings in early 2011, Saudis began taking to Twitter in vast numbers to express their frustrations, offering a new window into an opaque and profoundly conservative country.”

Indeed, the article went on to argue that: “The most popular postings are by clerics, but critics of various kinds – from prominent lawyers to feminists to ordinary citizens – have acquired large followings as they deplore corruption and injustice. Most Saudis now seem to post under their own names and photographs, a bold step away from the timid anonymity of the past.” This is partly true, but the reality is far more complex than the article acknowledges.

Whilst it is true that in the past ten years there has been a gradual but perceptible shift in the nature of Saudi Arabian discourse; specifically with increased Internet access and the widespread use of mobile phones. This does not mean that the state and regime have relaxed their pervasive vigilance. The state of affairs, with specific reference to social media is that ‘unofficial’ red lines have been set up in the social media sphere, ones which all Saudis are conscious of and few dare cross.

In the sample of tweets offered by the NYT, one sees this in evidence. Essentially, bar two or three, they mostly critique the state or apparatchiks within the state. This might appear to be progress, to show a determination by Saudi social media users to hold their government to account.

Yet, surprisingly this form of criticism is permitted, and is frequently used by all strata of Saudi society. This may seems paradoxical, but the regime does not consider the actual apparatus of government – including advisory councils, for instance – to be exempt of criticism. Interestingly, if there is a pertinent issue causing criticism from ordinary Saudis, the issue is highly likely to be blamed as being caused by the ‘government’, because the latter is amorphous and easy to deflect blame onto. However, open, direct and obvious criticism vis-à-vis the royal family, or the King, is never tolerated.

A frequent butt of this criticism is the majlis al-shoura (The Advisory Council) and is perceived within Saudi social media and society for being particularly ineffective. One can critique and criticise this body ad-nauseum, but calling for ensuing constitutional change, for example, is highly taboo and infrequent – even though one NYT tweet does mention it. Therefore, criticism is largely one track, along approved lines.

As one particularly active Saudi social media user put it: “The ruling figures will never be critiqued. But criticism of outsiders, or contractors, is allowed, even encouraged.” Therefore criticising police, ministers, state contractors, and the occasional – largely peripheral – royal family member, is allowed to a certain degree. This gives the appearance of openness and free discourse, but in reality it is a highly controlled, even choreographed, exercise.

If one examines the NYT selected tweets again, given this analysis, they appear as an amorphous, arguably ephemeral, critique of a certain body (for example, the police), or peripheral figures (maybe the head of the Shura, for instance). Indeed, they may have the style of free flowing openness and debate, but most are lacking in substance or directness. This is because every Saudi knows the high price for crossing the regime.

Take an incident that occurred in February of 2012, involving a Saudi by the name of Hamza Kashgari. Kashgari wrote – on the occasion of the birth of the Prophet Muhammed – some excerpts of his spiritual poetry on Twitter. One tweet read: “On your birthday, I shall not bow to you. I shall not kiss your hand. Rather, I shall shake it as equals do, and smile at you as you smile at me. I shall speak to you as a friend, no more.”

Although it was certainly a risqué gesture in a very strict, conservative Islamic state and society, Kashgari could nevertheless not have anticipated the vitriolic reaction. Within hours, the Saudi Twittersphere was ablaze with comments from users in Saudi Arabia, calling for his immediate execution for blasphemy. Kashgari fled. He was arrested in Malaysia, extradited back to the Kingdom and is still being held in prison, awaiting a trial that will never come.

His fate sent shockwaves through Saudi twitter users. Kashgari has crossed a red line of self-censorship. He had violated the unwritten code of Saudi Arabian mass media: namely, that you cannot post anything overtly anti-Royal family, or anti-Wahhabism. The red lines had, quite brutally, been redrawn.

Today, post-Kashgari, Saudi social media is recovering and starting to regenerate its zeal for debate and alternative discourses. However, the scene must always be examined through two binaries.  Firstly, Saudi social media may appear to be a free arena where anything is possible, and all debate is encouraged. But the reality is that the vast majority of Saudi social users –who give their real names and pictures – are self-censoring in a bid not to be arrested for a tweet or two. Most cannot afford to be targeted by the regime, and do not have the social connections necessary to stave off such a possibility. Caution always prevails.

Secondly, the NYT states that social media offers a new window to view the Kingdom. This is true, but it should not be assumed that the window is clearer than the ‘opaque’ nature of the State itself. Not everything is as it seems in the Saudi social media world, and where one sees demands for openness and new ideas being brought forth, this might not necessarily entail practical implementation. It may be, in common parlance, “all talk and no trousers”.

Social media, in general, certainly suffers from an ‘arm chair’ activist, highly passive image. This is an arena where the few tweet and the many listen, without usually doing anything to change the status-quo. Many Saudis may thus be seeking entertainment in the provocative nature of some tweets, rather than intellectually inspirational ideologies or means for change.

The NYT was right to draw attention to this very interesting, and often dynamic area of Saudi Arabian life. However, it is an area rich in contrasts, and fraught with difficulties, paradoxes and complications. It might be described as another opaque aspect of the opaque kingdom and a narrative best placed into a context of rigorous self-censorship.