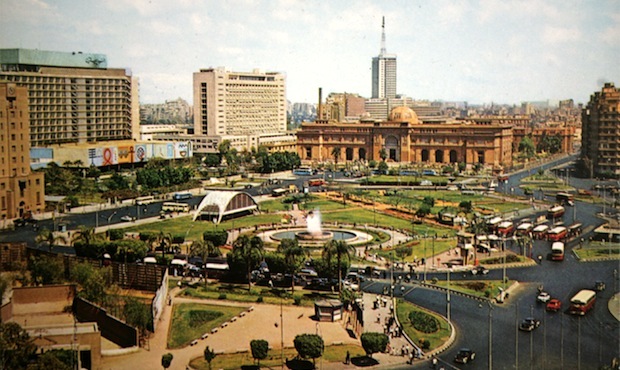 The significance of Tahrir Square can hardly be overstated. It has become a symbol of the Egyptian people's fight for freedom. But where did it all start?

The defining place of the Arab Spring, what we today know as Cairo’s Tahrir Square, came into being in the 1860s. Ismail, khedive of Egypt from 1863 to 1879, had received his education in Paris and witnessed Baron Haussmann’s reconstruction of the French capital. Perhaps wanting his own ‘Paris on the Nile’, once in power, khedive Ismail ordered the building of a new, modern district of Cairo west of the Fatimid-era old town, on a patch of reclaimed marshland on the bank of the Nile.

Ismail had his capital’s new district named after himself, Ismailia. His name, too, was given to the district’s main square: Maydan al-Ismailia, Ismailia Square.

For the next few decades, the main buildings by the square were a complex of army barracks to the west, between the square and the Nile. Originally intended for the Egyptian army, the British army took over the barracks when it arrived in the Egyptian capital in 1882.

At the turn of the twentieth century, Ismailia Square started moving towards to the Tahrir we are familiar with today. In 1902, construction of the red neoclassical building of the Egyptian Museum was completed on the square’s northern side. Standing right next to the barracks of the colonial British army, it must have made a striking symbol of the spirit and endurance of Egypt’s history and culture.

In fact, the square’s size and location made it ideal for gatherings of crowds, and the square was frequently used for demonstrations — against the British presence in Egypt, and later, the Egyptian monarchy. After the 1919 revolution against British rule, Cairo’s citizens started referring to the square as Maydan al-Tahrir, ‘Liberation Square’.

This would then become the square’s official name after the 1952 revolution.

In the late 1940s, Egypt’s King Farouk had a huge granite pedestal erected in the middle of Tahrir’s wide traffic circle. The pedestal was intended for a statue of Farouk’s grandfather and the square’s namesake, khedive Ismail. The statue took longer to produce than the pedestal, however, and when the statue of Ismail finally arrived to Egypt in the summer of 1952, it was too late — the monarchy had been overthrown.

The empty pedestal nonetheless remained in place for decades, as a colossal reminder of the failure of Egypt’s monarchy. After Gamal Abdul Nasser’s death in 1970, there was talk of finally placing on the pedestal a statue of the fallen president, but that idea never materialised either. The pedestal was finally removed in the mid-1970s during construction of the Cairo Metro.

Construction of the imposing government complex that dominates the square’s southern side, the Mogamma, also began in the late 1940s, in the final years of the monarchy. The Mogamma was finished in 1952, and the building would go on to become a symbol of the bureaucracy of the new regime.

At that point, Tahrir Square was almost a century old. Cairo had grown tremendously during its lifetime and the square was no longer on the edge of the city but in its centre. Nasser’s regime underlined the square’s importance by having several official buildings built around it (the British had finally abandoned their barracks by the square in the late 1940s, leaving ample space for new constructions). Among them the headquarters of Nasser’s own Arab Socialist Union, a building which would pass down to Mubarak’s National Democratic Party, only to be consumed in the flames of the January 25 revolution.