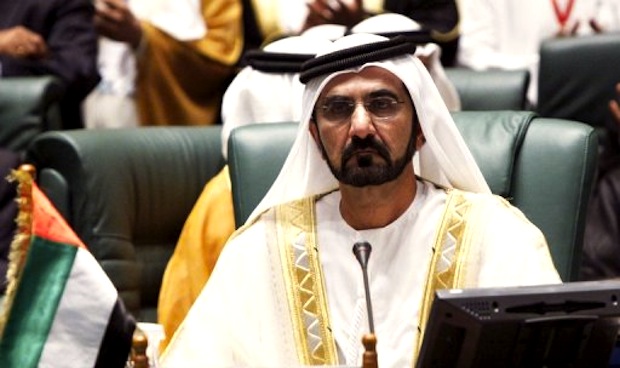 Your Middle East’s Dubai-based contributor Nazneen Akbari has listed the most influential royals and leaders of business and society. Is she right? Give us your opinion.

Ranked as the world’s 53rd most powerful man by Forbes, the President of the UAE and the ruler of its wealthy capital Abu Dhabi controls 8 percent of the world’s proven oil reserves and is in command of the Abu Dhabi Investment Authority (ADIA), the world’s largest sovereign wealth fund. With $630 billion in estimated assets, ADIA has stakes in several flagship companies including Citigroup, the Hyatt Hotels, Britain’s Gatwick airport and the New York’s Chrysler Building, which was recently purchased for $800 million. Sheikh Khalifa holds a net worth of $15 billion and has the world’s tallest building, Burj Khalifa, named after him.

Sheikh Mohammed’s leadership has turned Dubai into the region’s economic and financial hub in record time. His recently launched ‘Dubai strategic plan 2015’ aims to achieve a GDP of $108 billion by 2015. In 2007, the ‘UAE Government Strategy’ introduced by the Sheikh refurbished the government, resulting in a more effective structure. Besides having a fisted political power in the country and across the region, he has been one of the few political figures providing constant humanitarian assistance. The Mohammed Bin Rashid Al Maktoum Foundation was initiated by him with an endowment of $10 billion besides other multiple charity initiatives such as ‘Dubai Cares’ which has donated over $910 million to youth education initiatives in impoverished countries.

The first female minister in the UAE, has not only established her presence domestically but also internationally by ranking as the 92nd most powerful woman in the world. She was the former Minister of Economy and Planning before taking the Minister of Foreign Trade brief. The Sheikha’s involvement in strengthening exports with international partners makes her a vital part of the UAE’s diversification strategy. A member of the ruling family of Sharjah, she won plaudits for developing a system that slashed cargo turnaround times at Dubai airport. In 2002, she founded Tejari, the Middle East’s first business-to-business online marketplace. The minister also sits on the board of directors at the Dubai Chamber for Commerce and Industry, and is on the board at the National US Arab Chamber of Commerce.

Sheikh Ahmed bin Saeed Al Maktoum
President of the Department of Civil Aviation, CEO of The Emirates Group and Chairman of Dubai World

UAE is lauded by many for executing ambition into reality; a man credited for this success is Sheikh Ahmed, the President of the Department of Civil Aviation, CEO and Chairman of The Emirates Group and Chairman of Dubai World, Dubai’s investment wing. He changed the landscape of UAE’s aviation industry by transforming Emirates from a mere regional airline into the world’s largest carrier by international passenger traffic. He launched the low budget airline Fly Dubai and spearheaded the creation of airport Terminal 3, the world’s largest air terminal. The son of the former Ruler of Dubai is also the chairman of Emirates NBD, the emirate’s Supreme Fiscal Committee, the deputy chairman of Dubai Executive Council, and the head of Dubai Power and Energy Committee.

Ranked as the most influential, non-royal official in the UAE by Wall Street Journal, Al Shaibani, is the Director General of The Ruler’s Court, the CEO of the Investment Corporation of Dubai that supervises the government’s investment portfolio, the president of the Dubai Office, a private management entity for the ruling family and the Chairman of Dubai Islamic Bank, UAE’s biggest Islamic bank. Al Shaibani is regarded as a close aide of the Dubai’s ruler, Sheikh Mohammed bin Rashid Al Maktoum. His influence within the ruling family and his credentials make him a high-ranking figure within the political and financial scene. Al Shaibani holds a number of other key positions; he is the Vice Chairman of The Supreme Fiscal Committee of Dubai, board Member of Dubai Aerospace Enterprise, The Knowledge Fund and International Humanitarian City.

Lieutenant Tamim’s achievements and influence within the public sector and political scene is remarkable. He has been an instrumental force behind modernizing and creating a stable police force within the country through launching more than 22 different establishments such as the Dubai Police Academy, the Dubai Forensic Laboratory, the use of DNA in investigations, forming rescue teams and creating rehabilitation centre for drug addicts. Tamim, also largely credited for creating fully operational e-government departments has written several books on police work and public issues and is the beneficiary of eight prestigious awards. In 2004, he received an award for the best regional and executive personal and in 2002 he won the United Nations Award for the top Arabic figure in the fight against drugs. He was also lauded for the investigation into the assassination of a Hamas operative who was killed by a hit squad in 2010 in Dubai.

Adversity causes some men to break, others to break records. Mohamed Alabbar, the chairman of Emaar properties, broke the record by erecting the world’s tallest building ‘Burj Khalifa’ in 2010, at a time when the regions real estate market was in turmoil. Alabbar has been a pivotal figure in shaping and positioning Dubai as the commercial and lifestyle hub of the region. He set up ‘The Dubai Mall’, which became the world’s most visited shopping and leisure destination with 54 million visitors in 2011, and launched the iconic retail trade event, Dubai Shopping Festival. Named as the Middle East Personality of the Year in 2006 by Foreign Direct Investment magazine, Alabbar is a senior aide to Dubai’s ruler. He’s power expands into Africa, where he owns a mining empire, Africa Middle East Resources, that operates in eight African countries.

He is the CEO of the prestigious Mubadala Development Company, a government entity that oversees one of the emirate’s largest investment funds. Since its launch in 2002, Mubadala has evolved its operations, holding over $48 billion in assets in 2011. Khaldoon, is a member of the Abu Dhabi Executive Council where he is responsible for overseeing policy advice to the Chairman, the Crown Prince of Abu Dhabi. His authority reigns beyond the business world into the sports arena as the chairman of Manchester City Football Club. He was also instrumental in bringing Formula One Grand Prix racing to Abu Dhabi. Khaldoon holds a number of other prominent positions, he is the Chairman of the Emirates Nuclear Energy Corporation, the Abu Dhabi Media Zone Authority and Abu Dhabi Motorsports Management, and Deputy Chairman of the Abu Dhabi Urban Planning Council.

The CEO of the world’s fourth largest oil company, Abu Dhabi National Oil Company (ADNOC) is also the head of UAE’s Supreme Petroleum Council, a powerful body that is responsible for the country’s vast oil reserves. He is the longest-serving head of a state-owned oil company in the Gulf and a close aide to the Royal Family of Abu Dhabi. Al Omair belongs to one of the wealthiest families in the UAE whose businesses include diverse licenses awarded to them to import choice goods into the country besides owning large stakes in real estate, construction, petroleum and military equipment supply. The Al Omair conglomerate owns the biggest travel agency in Abu Dhabi, Al Omair Travels and Omair Automobiles, which is the sole importer of Peugeot cars into the UAE.

Al Ghurair is regarded as one of the founders of the UAE’s banking industry, and is the 401st richest person in the world, holding a net worth of 2.9 billion. The CEO of Mashreq Bank, the country’s fourth largest bank by asset, he was a pioneer in launching ATMs, credit cards, travelers cheques, consumer loans, mortgages and the widely popular Millionaire rewards-based savings program in the country. The business mogul is also on the Board of Directors of the Dubai International Financial Centre, Dubai Economic Council, Council of the UAE Higher Colleges of Technology besides holding the post of a Chairman of Masafi, RAK Petroleum and the Endowment Fund. The Al Ghurair conglomerate controls diverse holdings in real estate, cement, contracting, publishing, residential care and petrochemicals and is currently venturing into investing in Libya, where it already owns a majority share of the country’s largest oil refinery.