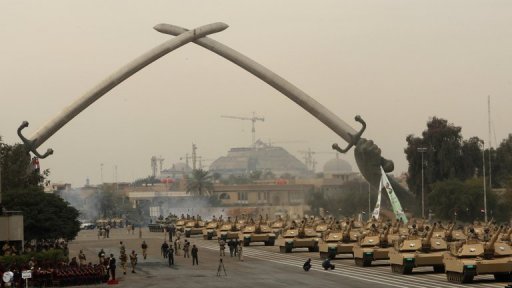 Baghdad cancelled a $4.2 billion arms package with Russia on Saturday citing graft concerns and instead opted for new talks, ending a deal that would have made Moscow Iraq’s second-biggest arms supplier.

In a bizarre sequence, however, the acting defence minister who negotiated the deal directly contradicted the prime minister’s office, insisting nothing had been cancelled, a position that was swiftly denied by the premier’s spokesman.

Officials said negotiations were ongoing for a new arms package.

But a cancellation of the initial deal announced last month is a setback for Moscow’s attempts to firm up its slipping foothold in the Middle East and also throws into doubt efforts by Iraq to equip its armed forces.

“When Maliki returned from his trip to Russia, he had some suspicions of corruption, so he decided to review the whole deal… There is an investigation going on, on this.”

Mussawi declined to say who specifically was being investigated, or when a final decision was made to stop the deal, announced during a visit by Maliki to Moscow in October.

In a hastily-organised press conference, however, acting Defence Minister Saadun al-Dulaimi insisted no deal had been cancelled, telling reporters: “We are still in negotiations.”

Dulaimi said no contracts had been signed, adding: “We did not transfer one dinar, we did not agree in a finalised way. It was only an offer, like any other offer.”

Asked about the minister’s remarks, Mussawi said simply: “The deal was completely cancelled.”

“Now we have started new negotiations (with Moscow) because we want weapons,” he said.

“These negotiations will be for different kinds of weapons, more advanced weapons, and will use a different way of contracting,” Mussawi added, without giving details.

The Russian embassy in Baghdad was not available for comment but a source in Moscow pinned the blame on Washington.

“Iraq’s declaration was forced by the United States, which is trying to avert this agreement’s implementation,” an unnamed senior official identified as being a member of the Russian military industry told the state RIA Novosti news agency.

Mussawi denied that US pressure played any role.

Had the announced deal, valued at more than $4.2 billion (3.3 billion euros), been finalised and implemented, it would have made Russia Baghdad’s biggest arms supplier after the United States.

Discussions were also said to be underway for Iraq’s eventual acquisition of a large batch of MiG-29 fighters and helicopters, along with heavy weaponry.

The statement announcing the deals said they were secretly discussed as early as April and revisited again in July and August during visits to Russia by Iraqi delegations that included Dulaimi.

The war ripping apart Syria threatens to unseat Moscow’s sole unwavering Arab ally, Bashar al-Assad, and has made it all the more crucial for Russia to forge other regional alliances.

Russia also lost an estimated $4 billion in outstanding contracts in the NATO-led Libya offensive that toppled Moamer Kadhafi, a one-time friend of the Kremlin, and Moscow has been since seeking to find a way to compensate.

Iraq, meanwhile, has sought to re-equip an army that, while regarded as a capable counter-insurgency force, lacks the ability to defend the country’s borders, airspace or maritime territory, according to officials.

The deal with Russia was seen by diplomats in Baghdad as a way for Iraq to avoid becoming too dependent on American military equipment, and to hold more bargaining power in weapons negotiations with Washington, which remains Baghdad’s biggest arms supplier by far.

It was also a short-term measure to boost Iraq’s air defence capabilities in the years before a cadre of F-16 fighter jets are delivered by the United States.

“It is not a policy to go to Russia,” Deputy National Security Adviser Safa Hussein told AFP in an interview last month. “The backbone of our armaments is from the United States, but whenever it is required that we go with another country, we will go.”