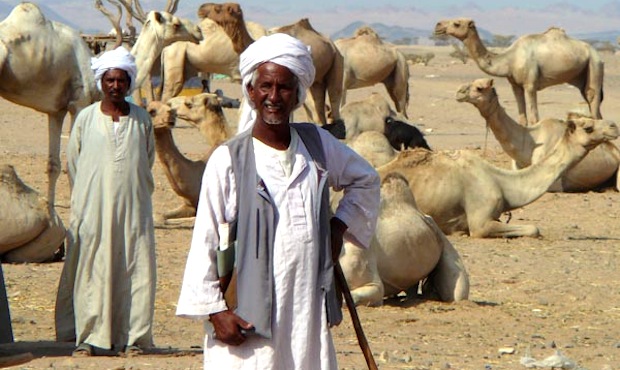 The typical dress of Egyptian men in rural areas is the Jellabiya; the Jellabiya is a traditional Egyptian garment. It differs from the Arabian Thobe in its wider cut, no collar (in some cases buttons) and longer, wider sleeves. In the case of farmers, these sleeves can be very wide. Jellabiya colours are often dark and tanned or striped fabrics are used. The Egyptian Jellabiya is made of cotton or linen; suitable to the hot and wet weather in Egypt and made of national materials.

With the massive migration to the Gulf countries in the mid 1970s, Egyptians started to introduce the Khaliji – Arab Gulf – Jellabiya there. The top of the Khaliji Jellabiya is almost the same as the Western classic shirts; with tight sleeves and a collar. This Jellabiya usually comes in one single color; white. Moreover, it is usually made of 70 percent polyester and 30 percent cotton. The Khaliji Jellabiya became a prominent item in the baggage of the returning migrants from the Gulf, both for their own use but also as a gift to family members, relatives and friends.

Despite the fact that this type of dress was not suitable for humid, dusty, and hot weather in Egypt, its usage became almost universal. Males, not only in rural areas but also in urban, replaced their traditional dress with this imported Jellabiya. In addition, Jellabiya replaced the Western Pajama in urban areas and it became the main dress for males at home. The most important motive for males to shift from the traditional Egyptian Jellabiya to the Khaliji Jellabiya was the claimed connection between this Jellabiya and Islam. Since the white dress has a connection with Islam as white is the preferred colour and since many Muslims wear white when they attend Friday prayers, and given the fact that this dress comes from Saudi Arabia, the Muslim holy land, this imported dress acquired a religious legacy and began to replace the national Jellabiya.

When Egyptian men migrated to the Gulf countries they recognized the white dress worn by men, but they found that women at these destinations were wearing black and were fully covered. Because they didn’t have strong contact with the society, Egyptian migrants regarded this dress as the standard Muslim dress, which also completed the “Black and White” picture, and began to import it. This development was associated with the relief of pressure against Islamic Movements at the time of Sadat, after a long ban during the Nasser regime. The Bedouin black robe replaced the traditional rural women’s dresses and extended to include all segments of the society. It’s important to mention that the Bedouin robe replaced the Western-styled women’s dress in urban areas not only for religious motives, but sometimes due to economic reasons. Bedouin robes could be worn many times and there was no need to have many of them, compared to the Western dress, which assumed maintaining a set of different styles and colours for different occasions to show high social status.