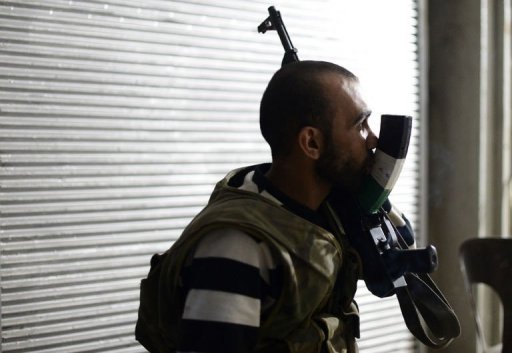 Syria’s regime unleashed tank fire and air strikes on rebels on Wednesday as it slammed France for recognising an opposition bloc formed in Qatar which it said amounted to a “declaration of war”.

Rebels killed at least 18 soldiers as they overran a military post near another Turkish border town that rebels have seized, said the Syrian Observatory for Human Rights.

Damascus slammed France’s recognition of the newly united opposition and said the Qatar meeting at which the dissident factions united on Sunday amounted to a war declaration.

“The Doha meeting was a declaration of war. These people (the opposition) don’t want to solve the issue peacefully through the mechanisms of the UN,” Syria’s deputy foreign minister, Faisal Muqdad, told AFP.

Muqdad said of the French move: “This is an immoral position. They are supporting killers, terrorists and they are encouraging the destruction of Syria.”

“We don’t support anybody in this conflict, neither President (Bashar al-) Assad nor the rebels,” Medvedev told a Finnish newspaper.

French President Francois Hollande has said Paris recognises the coalition as “the sole representative of the Syrian people and thus as the future provisional government of a democratic Syria.”

The question of arming the rebels would now “have to be necessarily reviewed… in all countries which will recognise this government,” he added.

US President Barack Obama said on Wednesday that Washington was encouraged by the new opposition coalition but not yet ready to recognise it as sole legitimate representative of the Syrian people.

“We’re not yet prepared to recognize them as some sort of government-in-exile, but we do think that it is a broad-based representative group,” Obama told reporters.

But he cautioned against the growing clamour for nations to supply weapons to the rebels.

“One of the things we have to be on guard about … is that we’re not indirectly putting arms in the hands of folks who would do Americans harm.”

Russian Foreign Minister Sergei Lavrov said the priority must be to end the bloodshed rather than form an opposition bloc which refuses to negotiate, following talks with Arab counterparts in the Gulf.

“It is essential that an end to bloodshed in Syria is reached,” Lavrov told a news conference in Riyadh, adding that a plan to end the violence drafted at the Geneva meeting in June held the key.

“There was no unification of all the opposition,” he said, charging that the National Coalition only “unified the groups represented in Doha.”

The Gulf Cooperation Council — Bahrain, Kuwait, Oman, Qatar, Saudi Arabia and the United Arab Emirates — has recognised the coalition, but the Arab League stopped short of doing so, only saying it saw the alliance as “the legitimate representative of the Syrian opposition”.

On the ground, tanks moved on the Yarmuk refugee camp and the neighbouring Damascus district of Tadamun after battles in the area late on Tuesday, said the Observatory.

Shells struck a second refugee camp east of Yarmuk on Wednesday while fighter jets bombarded the Idlib province town of Maaret al-Numan, which rebels seized on October 9 and the army has since sought to take back.

The latest clashes, which killed at least 18 soldiers near Ras al-Ain, on the border with Turkey, also left dead three rebels and wounded other combatants, said the Observatory.

The watchdog said 110 people were killed on Wednesday, including 32 civilians.

The insurgents have gained control of large swathes of territory in northern Syria, AFP journalists have observed, and it is possible to move freely for hundreds of kilometres (miles) making only small detours around army bases.

Syrian state television said “a military unit carried out an operation (near) Ras al-Ain to break a (rebel) cordon surrounding one of our military units.”

That resulted in “the elimination of terrorists in the area,” it added.

A Syrian military source said the rebels had surrounded the base in the early morning, but that troops escaped it and it was then “flattened” by the air force.

The Observatory has given an overall death toll of more than 38,000 since the anti-regime revolt broke out in March 2011.