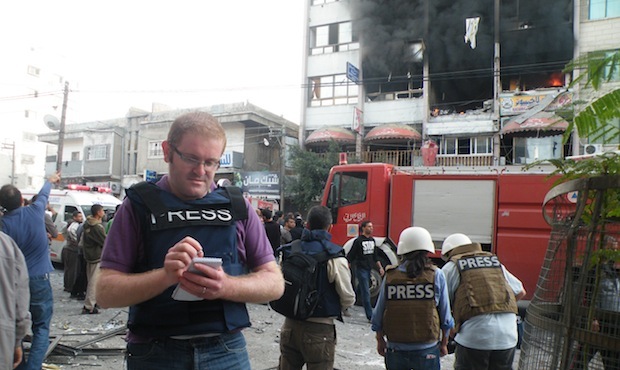 The Israeli army has launched several attacks on the workspaces of journalists in Gaza, considered by many a violation against freedom of speech. The Israeli Defense Forces, on the other hand, claim that Hamas and Islamic Jihad are at fault as they take refuge in media buildings and press vehicles.

In the past days, there have been four Israeli strikes on buildings housing local and international media in Gaza. The first two came on Sunday, when the Showa and Housari building was bombed, causing extensive damage and wounding six journalists, including Khader Al Zahar at the Hamas-affiliated Al Quds satellite TV channel who lost his leg during the attack.

“We feel sorry for the injuries among our crew. Yet, our duty to the community requires us to complete our mission,” said Emad Al Efranji, head of Al Quds local TV.

The Shuruq building, was hit on both Sunday and Monday. It housed various media outlets, including the Hamas-affiliated al-Aqsa television station.

“A direct hit was identified on the target. Four senior members of Palestinian Islamic Jihad were known to have been in the media building,” the IDF wrote on its official Twitter account on November 19, commenting on the Monday strike of the building.

On the same day, IDF said a senior Hamas operative was “targeted while driving a press vehicle, effectively disguising himself as a reporter. By doing so, he risked the lives of all journalists in the Gaza Strip.”

The Israeli military said its initial strikes on the Showa and Housari and Shuruq buildings had targeted rooftop operational communications belonging to Hamas, adding that it had sought to minimize civilian casualties. On Tuesday, the IDF hit another media building, housing AFP’s Gaza City office. No journalists were hurt.

An Israeli army spokesman confirmed targeting the eight-storey building, saying that “we attacked the seventh storey of the building. From what we understand, Hamas had a military intelligence operations room there.” He described the strike as “surgical” and declined to give further details.

But the Israeli strikes on media building have been condemned by the local Foreign Press Association as well as international media watchdog Reporters Without Borders.

“These attacks constitute obstruction of freedom of information,” Reporters Without Borders secretary-general Christophe Deloire said in a statement. “We remind the Israeli authorities that, under humanitarian law, the news media enjoy the same protection as civilians and cannot be regarded as military targets.

As a result of the attacks, many Palestinian journalists have been forced to evacuate their offices and go to work at different places in order to be able to keep on reporting on developments in the besieged strip.

The voice of Buraq, a local radio station, evacuated their office and started to broadcast from an international media agency since a lot of their equipment was damaged after an Israeli air strike.

“The Israelis want to destroy the Palestinian media by any means possible. This act won’t let us stop covering the violations of the Israeli occupation,” said Nidal Al Buria, a reporter and a public relation officer at the station.

Many journalists in the Gaza Strip work for local media agencies that reflect the opinion of a certain party such as Hamas or the Islamic jihad. In an interview with Al-Jazeera, Israeli government spokesman Mark Regev said the IDF could not treat Al-Aqsa TV employees as “legitimate journalists” like BBC or Al-Jazeera English journalists.

Ibrahim Abu al Fotoh, a human rights activist said that the Israelis have no right to strike any media organization regardless of whether the broadcasted materials is different than what the Israeli government wants the public to see or hear. And Christophe Deloire agrees:

“Even if the targeted media support Hamas, this does not in any way legitimize the attacks. We call for a transparent investigation into the circumstances of these air strikes. Attacks on civilian targets are war crimes and serious violations of the Geneva Conventions,” he said.

Darwesh Bulbul, a Palestinian journalist was wounded during the attack at the Shawaa and Hosary building. He said that this isn’t the first time he got injured or hurt by the Israeli army.

“As long as my health is fine, I will keep on doing my work and documenting the Israeli aggressions.”