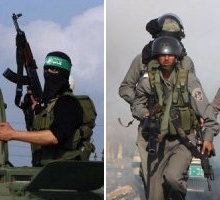 I told myself never to write about Palestine and Israel again. It’s futile. It’s useless. The conflict is unsolvable as long as two people claim the same piece of land, not willing to share it. 64 years since the creation of Israel, 64 years since Naqba and no end in sight in a conflict that has been with me for all my life.

But then Pillar of Defence started, the Israeli operation against Hamas, against the al-Aqsa Brigades, against the people of Gaza. And here I am writing about Israel and Palestine again. Just as many other journalists, analysts and bloggers around the world. Media live on war and die on peace.

When Israel was founded, when the struggle for Palestine began, it was a matter of geopolitics. Israel and Palestine occupied the same strategic point that the Romans had to have, that in Cold War times the United States and the Soviet Union craved to control: the eastern edge of the Mediterranean Sea. The Americans were with Israel and the Soviets had a hold on Syria and Egypt. If Israel were to fall, the Soviets would dominate the entire eastern Mediterranean, a thought unbearable for the forces against communism.

But being anti-Israel didn’t mean being pro-Palestine. The project of a Palestinian state was met with great suspicion by its Arab neighbours, for different reasons. Syria had always been uncomfortable with the concept of Palestinian statehood and actually invaded Lebanon in the 1970s to destroy the Palestinian Liberation Organization (PLO) and Fatah. The Jordanians, who could have granted Palestine its independence between 1948 and 1967, remained very fearful that the Hashemite monarchy could collapse under the weight of a Palestinian state nearby. And the Egyptians never saw the region as a distinct state, but as an extension of Egypt.

With the end of the Cold War, the US lost their only challenger to world leadership. The geopolitical importance of the eastern Mediterranean fell dramatically. The current round of violent conflict only matters to the Palestinians and the Israelis, but not to the world. With all diplomatic efforts to improve the fate of the Palestinians stalled, the world had forgotten about Palestine if not for rockets fired into Israel from Gaza. The awareness of Palestine and the Palestinians lives on war and dies on peace.

Hamas was quite happy with the situation before Pillar of Defence, with the fact that Gaza was blocked off from the rest of the globe. It allowed them to make tons of money with goods smuggled through the many tunnels connecting Gaza with Egypt. Were the border barriers lifted, their income would drop. Hamas had not welcomed the efforts of activists worldwide to break the blockade of Gaza through actions under the “Flotilla” brand. These actions threatened the group’s undisputed hold on Gaza. Does Hamas really care about the United States of Palestine? Hamas is the King of Gaza and they want to keep it this way, rather than becoming a prince among others in Palestine.

Lately, new players have sprung up in Gaza, as Rami Khoury writes in Lebanon’s The Daily Star: a steady expansion of militant Islamists, such as Islamic Jihad and other groups, who make Hamas look like a relative softie. To remain relevant as a resistance movement, to overcome the fattening complacency that has beset them, Hamas had to level up the game, needed to shoot rockets towards Israel. Never mind the destruction that Israel will bring upon Gaza in retaliation. For Hamas, the calculation is simple, now that Qatar has pledged to pay for reconstruction in Gaza: more destruction, more reconstruction, more money from Qatar, more skimming off by Hamas officials. Hamas’ survival – politically and economically – lives on war and dies on peace.

I’d be worried if I was Israel. Despite 786 warplanes, 3,000 tanks and a possible 176,500 Israelis on active duty (according to a CNN count), Israel doesn’t feel safe. Since 2006 and the Lebanon summer war, Israel has a loser’s number on her shirt. (Disclosure: I was in Lebanon in July of 2006 and had to be evacuated by my embassy to Damascus. Syria was a safe haven then.)

Forces in Gaza now have greatly advanced weaponry at their disposal, the Fajr-5 rockets, developed in Iran, assembled in Gaza. These rockets can reach Tel Aviv and Jerusalem, a clear strategic game changer. If dull Hamas can deploy these projectiles, one has to wonder to what level clever Hezbollah has developed its arsenal since 2006. On Israel’s north eastern front, the Golan, the Assads of Syria had positioned themselves as stalwart guardians of Arab resistance against Israel. A ridiculous claim that only served to legitimize the Assads’ power grip: the last shot fired from Syria into Israel dates from 1973 (except some border crossing stray bullets two weeks ago). But now Assad, “the devil we know”, will soon be replaced in Damascus by a devil we don’t know. In Jerusalem, they are writing Bashar’s farewell homage these days.

Israeli officials like to call the work of their security environment “cutting the grass“: a task that must be performed regularly and has no end. Only now the grass watered by different developments in the region grows faster than Israel’s lawn mowers are able to manage. But what are the alternatives to “cutting the grass”? Israeli politicians have shut the door on a two-state solution, and a one-state solution will mean the end of a Greater Israel as it was dreamed of. Strategically cornered and lacking options Israel is stuck in a vicious cycle of violence, deterrence and retaliation. The idea of Israel lives on war and would die on peace.

64 years since the creation of Israel, 64 years since Naqba and no end in sight. Too many lives have been lost, too many minds have been corrupted. How do you deal with a parent who beats his stubborn child and then locks it up in a closet, hoping it will calm down over time? As in all conflicts, the main key to a solution lies with the stronger party, Israel. Only Israelis have the power to decisively alter the course of events. Unfortunately, the Israeli society is not ready for this. It is a society glued together by a narrative of being an eternal victim of history, callous towards the sufferings of others, a society addicted to living with demons. Diplomats quoted the late Hafez al-Assad as saying, if you want to destroy Israel, offer her peace. This still holds true today. Israel is a society in danger of imploding should peace knock at the door.

“A serious Mideast peace effort starts with no more rockets fired into Israeli territory,” US president Obama said last Sunday. The psychotherapist starts with treating the resisting child, not the abusing father. Israelis, Palestinians: you may prepare for another 64 years of living in war and dying in war.