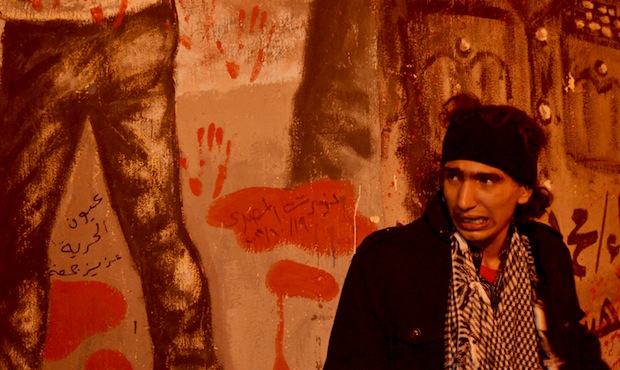 ‘’Apparently, the Ministry of Interior Affairs is willing to honour the protestors today and celebrate the anniversary of Mohamed Mahmoud,’’ a protestor shouted on Monday with a sarcastic tone.

A few minutes later, some people who were hiding on the school buildings near Mohamed Mahmoud street threw Molotov cocktails at the protesters.

The protesters were there to commemorate the one-year anniversary of the Mohamed Mahmoud clashes. They started on November 19 last year as security forces clashed violently with civilian protesters in order to disperse a sit-in. This led to more street protests, and the security forces began a series of violent attacks that lasted until November 24.

How did the clashes begin? No one seems to be able to provide a certain answer; the streets were dark and the stories are mixed. Some claim that the protestors were trying to break the concrete walls in the side streets and threw bricks at the security forces, others said that those who were hiding in the buildings threw bricks before the Molotovs started flying.

Regardless, the clashes left a unique impact on everyone who experienced it, according to activist Ghada Naguib.

“Last year I went to Tahrir Square on November 19 around 5 pm, I promised my husband that I am going to stay home during pregnancy, but when I heard about the violent attack…I could not resist and I just left home and joined the protestors.”

The majority of protesters consider the first round of Mohamed Mahmoud clashes to be the most brutal during the revolution, several days of violent battles between central security forces and protestors left more than 40 dead and thousands injured.

“November 20 was very significant, I cannot forget the moment when the military forces and security forces broke into the square and attacked… It was unexpectedly painful, and it is unforgettable,’’ Ghada Naguib added. In the memory of the Mohamed Mahmoud catastrophe, she now brought her baby to the place where she had stood at the centre of the clashes.

Mohammed Omar, a 30 year-old school manager, came to the anniversary in order to remind people of those who sacrificed their lives for others, and to remind the authorities that the people do not forget the violent attack.

‘’We demand fair trials and we will not quit until we get the criminals behind bars. I still remember when central security broke the truce and attacked repeatedly. Eventually they accused the protesters of provoking the forces. If we truly attacked the Security Forces, why would we gather again in the square and leave Mohamed Mahmoud as soon as the soldiers withdrew?”

Mohammed Mohammed, a French literature student, describes his experience during the first round of the clashes as challenging and dramatic.

‘’My parents locked me at home to prevent me from going…but I felt ashamed when young people were martyring every minute, I was determined, and I could somehow sneak out and I joined the clashes finally. Luckily, I had minor injuries. However, my friend passed out from the tear gas and he got some kind of respiratory failure.

“I was terrified…and at some point, I thought I was going to lose my friend. I was so scared and frustrated. He is better now, and today we gathered again to participate in the anniversary. Today I want people to remember youth who sacrificed their lives for bread, freedom and social justice.”

The marking of the Mohamed Mahmoud anniversary resulted in new clashes breaking out between protestors and the security forces on Monday, which are still ongoing. At least 119 protestors have been detained and many injured, most critically 16 year-old Gaber Salah, a member of the 6 April movement, who was shot with two bullets in the chest and head on November 20. Suffering from severe brain bleeding, doctors have pronounced him clinically dead, although his family and friends are surrounding him, still hoping for a miracle.

In his last Facebook status, Gaber Salah wrote: ”this is the last status I write until I come back from the eyes of Freedom Street (If I come back). I am taking off to the street for the blood of our brothers, for the revolution, for my best friend that I carried in between my hands while he is dead, Ossama Ahmed, and for Ahmed Harrara’s eyes. Thousands of martyrs died for the revolution and I am going to retrieve it. If I did not come back, I have one request, please complete the revolution and retrieve our rights; for my friends you are the best ever and I truly love you. I bare witness that there is no god but Allah, and Muhammed is his messenger.’’