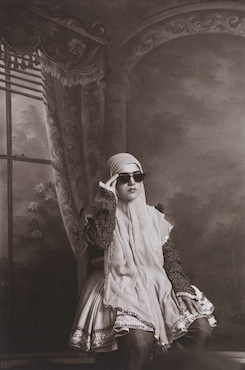 Light from the Middle East, an exhibition of contemporary Middle Eastern photography at London’s Victoria & Albert Museum, has been met with the usual reviews which praise the works for ‘retaking possession’ of the region or for ‘subverting Western clichés’.

Critics seem to turn instantly to the template of Orientalism for their appraisals of Middle Eastern work, and while artists from the region do need to take a role in challenging damaging stereotypes, the fact that so many Western critics refuse to view non-Western work outside of the frame of Orientalism doesn’t allow work from the region to be seen for what it really is.

And awarding brownie points to photographers who actually reinforce Orientalist imagery doesn’t help either. Two works by Saudi Arabian photographer Manal al-Dowayan show an Arab woman in traditional headdress and jewellery, her eyes darkened with kohl. In one photograph she holds a board with the words ‘al-Jahl zulaam’ (‘Ignorance is darkness’) written on it, perhaps a reference to al-Dowayan’s own work which presents the sort of imagery that 19th century Orientalist painters would have fawned over.

Meanwhile, Iranian photographer Shadi Ghadirian has created a series of photographs inspired by portraits of the Qajar era (1785-1925) in which people posed with props representing their aspirations. Ghadirian brings the idea up-to-date, by photographing her sitters in traditional Qajari fashion, and asking them to pose with modern items, such as sunglasses, a mountain bike, a can of Pepsi… The aim is to create contrast, but the result is a collection of photographs of women in severely outdated costumes, the juxtaposition of modern items making them appear backward and pre-modern. Perhaps not Ghadirian’s aim, but a Western photographer producing the same work would be swiftly cut down by critics invoking the charge of Orientalism, and it is a surprise that the V&A chose one of these images for their promotional flyers and posters.

Much of the work I preferred was that which put the focus on creating beautiful images rather than trying to load their photographs with meaning.

One such photographer is the Cairo-born Youssef Nabil, who is represented by twelve portraits he took of elders from the Yemeni community of South Shields in north east England, first generation survivors from one of the UK’s oldest Muslim communities. Nabil takes staged, gelatine-silver portraits which he hand-colours to create dreamlike images that reference the glamorous Egyptian film posters of the 50s and 60s.

Fellow Cairene Nermine Hammam felt that Egyptian soldiers looked like they wanted to be anywhere but Tahrir Square during the uprising of 2011. Her photographs, influenced by her background in filmmaking and reworked through digital manipulation and layering, transport the soldiers to serene, natural settings far from the drama of the Arab Spring.

Probably the most eye-catching works are the luridly colourful pieces by Lebanese photographers Joana Hadjithomas and Khalil Joreige. Inspired by pre-civil war postcards still being sold in Beirut, they invented a photographer named Abdallah Farrah, who was commissioned by the Lebanese tourist board in 1968 to make postcards of Beirut. When the civil war broke out, Farrah burnt his negatives to reflect the destruction around him, and the works presented by Hadjithomas and Joreige are prints from the fictional photographer’s recovered negatives.

But while the exhibition is heavy on art photography, it is curiously light on documentary photographs considering the conflicts and upheavals suffered by the region, with no photojournalism taken during the Arab Spring at all.

One of the documentary photographers that does appear in the exhibition is Syrian-born Issa Touma, represented by a selection of black and white photographs taken at the annual Sufi festival of al-Ziyara. Touma took his photographs over ten years, gradually gaining the trust of his subjects. However, the images on show objectify the people he is photographing, focusing on the strange and morbid with pictures of glum crowds and devotional self-wounding. Although the festival honours the memory of a Sufi saint, occasions such as these are also happy events – statistics that show more children are conceived during the festival than at any other time of the year go some way to proving this – and the photographs should reflect this too. Perhaps the criticism should be of the curator’s selection, as I’m sure these are just a handful of the photos Touma took of the festival. Either way, I overheard a woman exclaim: ‘Oh my God, look what they are doing!’ when viewing the images, a reaction which doesn’t suggest she has been encouraged to feel much empathy with the people in the photographs.

Far better is the work of Iranian photographer Abbas, whose pictures were taken from 1978-79 during the Iranian Revolution, making them the oldest works in the exhibition. Abbas’s black and white images cover scenes such as protests outside the US embassy, women training to use firearms and a morgue where the bodies of four executed generals are being held. Photos are not taken for shock factor but because these are the scenes Abbas witnessed and felt others should see too. More than 30 years later, many look back on the Iranian Revolution as the moment when a relatively tolerant country was replaced by a strict theocratic regime, but at the time there was mass resentment for the Shah and popular appreciation for Ayatollah Khomeini. This ambiguity is captured by Abbas’s photographs, which succeed because rather than being loaded with pre-assembled meaning, they allow the viewer to decide on the politics for themselves.

Light from the Middle East: New Photography is being exhibited at the Victoria & Albert Museum, London, until the 7 April 2013.