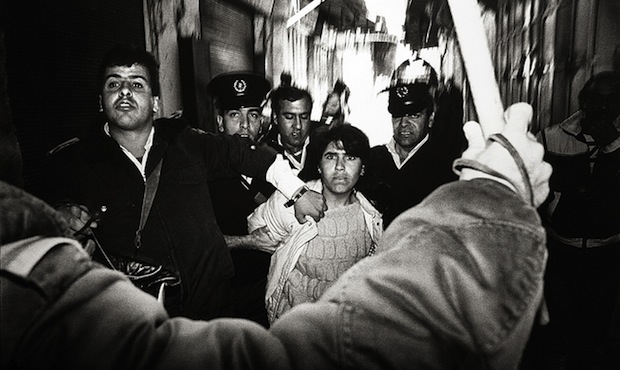 In this interview by Terri Ginsberg, distinguished Palestinian author, activist, poet, and journalist Dr. Fouzi El-Asmar discusses Al-Ard (The Land), a political organization he helped found in Palestine during the late 1950s.

Terri Ginsberg: It is probably fair to say that most narratives about Palestinian liberation situate the origins of post-1948 Palestinian political activity at the formation and founding of the PLO. In turn, ensuing discussion of Palestinian politics to this day tends largely to focus on recognized institutional, especially national and religious, structures at the expense of people’s movements and initiatives. By contrast, the composition and history of Al-Ard calls into question such a limited narrative. Can you give readers some background of Al-Ard and explain the rationale for its founding?

Fouzi El-Asmar: The Al-Ard movement was founded in 1958, following the split between the Communist Party in Israel, a majority of whose members and supporters were Palestinian, and the Palestinian national movement. During that period a split had occurred in the Arab world, when Gamal Abdel Nasser, then the leader of the Arab national movement, entered into a conflict with the Communist Party in Iraq over political principles. The latter started attacking him, and he in turn attacked them, and the result was a split that affected Palestinians inside Israel. The Palestinian nationalist group, at the time called al-Jabhah al-Sha‘biyyah, or the Popular Front, which was previously in unity with the Communist Party, split from it.

Now, the main thing for the Arabs in Israel was the land – which is how we got the name Al-Ard. I was one of the founders along with my mother, Najla El-Asmar, who had been a Palestinian activist and writer since before 1948. Al-Ard started the independent national movement for the Palestinians in Israel, connecting the struggle and demands of the Palestinians in Israel to Palestinian demands in general. Among other things it called for solving the refugee problem and recognizing that the main power in the Middle East is the Arab nation, to which Israel must adjust itself in order to exist there. When Al-Ard split from the Communist Party, it not surprisingly garnered a big following. Nasser was very popular, so the majority went with Al-Ard, and during the next Israeli elections, the Communist Party went from having six to only three members in the Knesset.

TG: How did the Israeli government react to Al-Ard?

FE: In the beginning, the Israeli authorities favored Al-Ard because it was hurting the Communist Party, so they let it alone for a while. Some time later they decided that for them, Al-Ard was a dangerous group, and they started fighting us. They arrested some of our members, and when we asked for permission to publish a newspaper, they refused. So we did something else: we started publishing a newspaper in Israel called Al-Ard, according to the British Mandate rule for which each person may publish only one issue of a newspaper. We used the name Al-Ard, but each group member would publish a different issue of the paper using a slightly altered title each time, for example Shad (“Smell of”) Al-Ard was the name of the second issue, Kalamat (“Words of”) Al-Ard was the name of the third issue, and so on. In fact this is something that the Jews themselves did before 1948, when the British wouldn’t allow them to publish organizational newspapers. We ended up publishing twelve issues. During the production of the thirteenth issue, the police raided the printing house and confiscated all our materials.

TG: What were Al-Ard’s other activities and accomplishments, and how were they received by Israelis?

FE: The story of Al-Ard is long. It fought for the rights of the Palestinians in Israel. It demonstrated and wrote against the confiscation of Palestinian land. It agitated for Palestinian literature, with its national aspirations, to be included in the educational curriculum. Until that time, for example, we were allowed to study poetry in Arabic, but Palestinian poets were excluded from the canon. Al-Ard also fought for equal rights for Palestinians and in the beginning tried to engage with certain Jewish-Israeli parties and activists. We had several meetings with Uri Avnery, for instance, then head of Semitic Action, which amounted to nothing in the end. Some Israeli parties tried to negotiate a formal relationship with Al-Ard but demanded that we engage with them on an equal footing, which of course was impossible given the practical realities of the Israeli electoral system. In addition we were frequently attacked by the Communist Party. So Al-Ard decided early on not to engage with these parties and to establish itself independently.

TG: In that light, what else did Al-Ard do?

FE: Notwithstanding the harassment sustained by its members, who were either put in Israeli jails or sent into internal exile (e.g., moved forcibly from Nazareth to the Negev), Al-Ard decided to run candidates for the Knesset. At that time there was no independent Arab party; all the Arab parties were related to, or part of, one of the Zionist parties, such as Mapai or Avodah. The Israelis would deploy a kind of trick whenever attempts were made to establish an independent Arab party. Israeli electoral rules at the time required a certain number of petition signatures, maybe 750, for a party to be accepted on the ballot. (The rules changed in 1992 to 100.) But whenever a party would submit a valid petition, the Shin Bet (Israeli Security Agency) would pay visits to some of the signers and force them to withdraw their signatures, so that legally that party could not run candidates. Al-Ard did something different: it collected 5000 signatures or more! That number was so difficult for the authorities to hide or undo that they resorted to taking Al-Ard to the Supreme Court where, citing its party platform, they accused it of opposing the existence of the state of Israel. Sure enough, the Court decided to exclude Al-Ard from elections, it forbade all association with Al-Ard and prohibited the publication of any newspapers using its name.

After that, Al-Ard became the basis for the Arabs in Israel to focus on another initiative—a national initiative. The Abnaa el-Balad (Sons of the Country) formed in several Arab villages and towns within the Israeli “Triangle,” as did other organizations which worked like Al-Ard but used different names and were more careful with respect to Israeli rules—such strategies have in fact been pursued to this day. Azmi Bishara, for example, who was a very young man at the time—we used to call him one of our children—established the National Democratic Assembly (Balad), which still exists. The Muslims established a party, too. Thus was the influence of Al-Ard: it gave the Arabs in Israel a national injection, which became the basis for much of what developed since then in Palestinian politics.

TG: Are there any lessons that you derived from that experience which might be instructive and inspiring to contemporary activists and intellectuals engaged in the Palestinian struggle and in liberation struggles throughout the region?

FA: Al-Ard was established before the PLO, and the charter of the PLO contains many ideas first formulated by Al-Ard. In fact what Al-Ard did was to supply a base for furthering understanding of the question of land in Israel. Al-Ard means “the land,” in turn suggesting the need for Palestinian refugees to be returned to their land and compensated for its expropriation by Israel. These demands are still unsettled today, and Israel is not willing to accept any of them. Until it does, I am doubtful that a genuine peace can be reached. It’s not a matter of two states or one state, but of recognizing seriously the rights of Palestinians, of respecting people who lost their land, their property, who have suffered for generations, whose refugees must be repatriated. This is a humanitarian issue that is also a national demand by Palestinians, which must be universally recognized if there is ever to be peace in the Middle East.

This interview excerpt is a follow-up to one this author published in Arabisto in February 2012. There Dr. El-Asmar shared his thoughts about the Arab uprisings and the importance of culture to the Palestinian liberation movement, in the context of analyzing the problematics of Zionism, Israeli nationhood and related matters that affect the lives and well-being of Palestinians. Here Dr. El-Asmar discusses Al-Ard (The Land), a political organization he helped found in Palestine during the late 1950s but whose history and perspective have been marginalized if not largely absented from most narratives about the Palestinian liberation movement. In turn Dr. El-Asmar draws instructive connections between that political experience and relevant issues shaking the contemporary Arab and Muslim world.