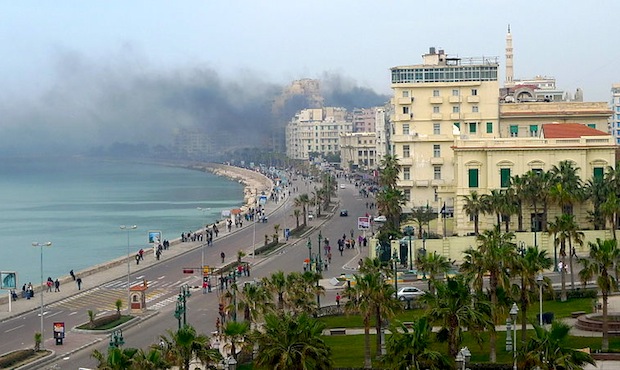 While all eyes focused on the demonstrations in Cairo, following President Morsi’s constitutional declaration, there are still huge protests in cities away from the capital, both supporting and opposing the declaration. Your Middle East gives you a roundup of protests in some of the other governorates.

Alexandria
Over the past eight days, Alexandria witnessed large numbers of people rallying against President Mohamed Morsi’s new declaration. Starting Friday 23 November, people marched from all over the city to Sidi Gaber. But, according to Mayye Zayed, an Alexandria filmmaker who is critical of the President’s move, the massive marches didn’t only take place during the weekend.

“Alexandria witnessed that largest march on Tuesday 27 November,” she said. “Thousands of people took the streets, all opposing the constitutional declaration.”

Zayed adds that the situation there escalated as some people protested outside the Freedom and Justice Party’s headquarters in an attempt to storm it, although she does not know the exact details of the event.

“What I can say about the general atmosphere is that a lot of people are opposing Morsi’s decisions,” she said. “Whenever we went out in marches last week, we saw people all over the cities in their balconies holding signs opposing the constitutional declaration and chanting with us even from inside their houses, and we tried to call them to come and join us, and actually one woman told us to wait for her and joined our march.”

Zayed says that the night of Friday, November 30, witnessed clashes between those opposing and supporting the declaration. She left the protest in Sidi Gaber for an hour and then received a call from a friend saying that armed thugs were attacking the protest.

“By the time I returned to Sidi-Gaber, the situation was quieter, as the police controlled the situation, but it soon escalated again and the supporters started breaking glass and attacking people, and the police started firing rubber bullets at the thugs,” she added.

On December 1, the situation changed. State news announced huge protests of President Morsi’s supporters, varying from Muslim Brotherhood members and Salafis and other Islamic forces, in what they called “Sharieia and shari’a” (legitimacy and Islamic law).

Suez
Turning to Suez, a governorate known for its impact during the revolution that toppled Mubarak almost two years ago, it is still playing an important role in this new wave of protests.

Sayed Abd Allah, Al-Badil newspaper’s reporter in Suez, said that over the past week all the protests that went out to Al-Arbeyeen Square or any other popular square in Suez were against the constitutional declaration. He adds that there were minor protests supporting the declaration, but they were just on the side of the road or far away from any square or area where there might be protests.

“But, a lot of people were surprised yesterday (December 1) when the supporters of the declaration showed up at 9am at Al-Arbeyeen Square, especially that they announced earlier that they are not going to hold protests in Suez and that they are all going to join the Cairo University protests,” he said.

Abd Allah says that in response to the supporters’ decision, the protesters against the declaration, who also announced earlier that they will only have marches in the evening, changed their plan and went to the square at the same time. Clashes went on from around noon until late in the evening, and the opponents first kicked the supporters out of the square and took control over it, and then the supporters returned again but were forced to leave a second time.

“The supporters were using Islamic chants most of the time, while on the other side, those against the declaration were using revolutionary chants,” added Abd Allah. “The clashes between the two sides resulted in the injury of a number of people from both sides.”

Al-Sharqiya
Moving to President Morsi’s hometown, Al-Sharqiya, protests took place but were not as big as in other cities.

Hany Ammar, a resident of Al-Sharqiya, said that during the week there were a couple of protests against the declaration, but the numbers were very low (one with 50-60 people and another one with 200-300 people), whereas the one protest supporting the declaration gathered a large number of people, but only lasted for two to three hours.

“I have never seen such a large protest in support of President Morsi, as his hometown didn’t vote for him and voted from Ahmed Shafik, and you can tell that most of the people, who came with their wives and kids, came from villages and not from Zagazig,” he said. “And, the power of the Muslim Brotherhood lies here; they are very organized and know how to attract people.”

Al-Arish
According to Muhamed Sabri, a blogger and journalist residing in the city of Al-Arish, almost all of the protests over the past week were in support of the constitutional declaration.

“I heard there was a minor protests against it last week, but I actually didn’t see it,” he said.

Sharm El-Sheikh
As a peaceful city known to be a tourist destination for diving and relaxation, Sharm El-Sheikh’s activity was slightly disrupted by minor protests against the constitutional declaration.

Mohamed El-Etreby, a banker residing in Sharm El-Sheikh, said there were a couple of minor protests by Al-Hadaba police station over the last week, all against the declaration.

Elsewhere…
As for the other areas outside Cairo that saw protests, two of the cities that had a lot of clashes going on during the week, along with attempts to storm to Muslim Brotherhood headquarters, were Al-Mahalla and Port Said. A large number of people were injured in these cities and the clashes were very violent between the two sides. Also, 15-year-old Islam Fathi died in the city of Damanhour on November 25 during the protests that left 26 others injured.

In Upper Egypt, there were a number of protests first against the declaration earlier in the week in Assiut, while on Sunday, there was a huge protest showing support for the declaration and President Morsi’s decisions.

The situation was quieter in most of the cities on Sunday December 1, as the Muslim Brotherhood and Islamic groups’ supporters were brought to Cairo in buses to join the rally in Giza.