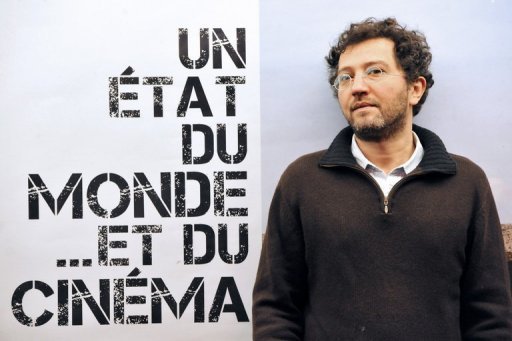 For half a century Syria’s filmmakers were forced to work under a numbing state censor or choose exile. But a flow of images beamed online from the conflict zone, spotlighted in Paris this week, may contain the seeds of a new Syrian cinema.

The French capital’s Forum des Images film centre is showcasing some of the gems to have slipped past the censors since the 1970s, alongside raw and urgent images born of the revolution.

“There are ways to shoot movies in Syria, but you have to be brave,” explained Meyar Al-Roumi, who once resorted to bringing along TV-star friends as decoys to be able to film untroubled by police.

Other times he was not so lucky: in 2007 while working on a portrait of six Damascus taxi drivers, he was denounced by one of them — who turned out to be secret service worker moonlighting as a taxi service.

In his 2001 documentary “Un Cinema Muet” (Cinema on Mute) the Paris-based Al-Roumi describes how Syria’s National Cinema Organisation managed to choke off homegrown filmmaking since it was founded in 1963.

He tells of talented directors like Ossama Mohammad or Mohamed Malas — screened at the festival — who manage to make just one or two films in a lifetime, ground down by the Kafkaesque requirements of the state.

“The regime managed to kill off Syria’s cinema just as it was being born,” summed up Charif Kiwan, who founded a production company called Abounaddara in Damascus in 2010 to broadcast emerging talent directly online.

“Today it is a field of ruins. There are no cinemas, no funding, filmmakers have to look to foreign festivals and broadcasters — therefore to an audience that is not their own.”

That is the case of Al-Roumi or the late documentary maker Omar Amiralay, who chose to shoot films without official approval for broadcast on the Al-Arabiya or Al-Jazeera networks, or the Franco-German Arte.

But the advent of the Internet — and the sense of urgency brought by the Syrian conflict — has thrown things wide open.

Each Friday since April 2011, a collective of volunteers formed by Abounaddara has posted a haiku-like little film on the net, between one and five minutes in length.

The 44-year-old Kiwan, who coordimates the network from his current base in Paris, pays tribute to the people brave enough to point a camera at a soldier to bear witness to abuses.

But he also says a key goal is to counterbalance the flow of raw images coming out of the conflict zone, relayed by foreign TV networks who buy up hard drives of footage to illustrate their reports.

“That had disastrous consequences,” said Kiwan. “Activists started filming with the aim of getting their images on Al-Jazeera, shooting only what they wanted to see: a soldier firing at the crowd, a minaret hit by bullets.”

“And so the revolution was reduced to a stock image: of people being shot at like rabbits by barbarous soldiers.”

“That is a terrible reality. But if you reduce the revolution to that — none of it makes any sense.”

Kiwan works with a network of self-taught filmmakers in Syria, aged 20 to 40, a majority of them women, linked up the Internet.

“Our idea is to show why people decide to take to the streets, what is going on in their heads, the whole social side of the movement.”

Many of the films rely on first-person testimony — from army defectors or ordinary Syrians — their faces obscured. Others are more poetic in approach, though the conflict is always centre-stage.

“You have a generation that acquired a film culture on social networks, on YouTube, who are totally free and uninhibited,” Kiwan said. “The revolution brought them together, and I think the future of Syrian cinema will come from them.”

Al-Roumi, who has been unable to return to Syria since 2010, is closely watching the output of this new generation.

“There have been some wonderful films” he said. “Syrians are making cinema from reality. New filmmakers are bound to emerge from this — although for now the work is still quite raw.”

While openly supportive of the Syrian rebels, Abounadarra is determined to keep its film-making open-minded.

“We run films critical of both sides,” Kiwan said. “We use humour, derision, we want to make normal cinema with all sort of ingredients.”

Their latest post, “The Unknown Soldier”, shows a defector from the government forces turned rebel fighter, speaking softly of atrocities he says he witnessed, and committed, for both sides.