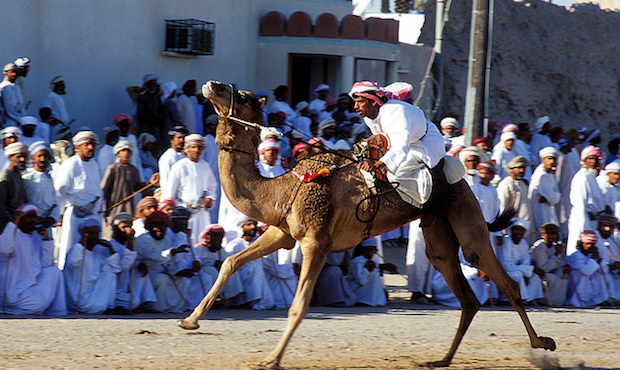 Most people relate the word sports to conventional games such as soccer, cricket, and baseball. But in Oman sports often have another definition.

Dhow racing, horse racing, camel racing, bull fighting and falconry are Oman’s prided and significant traditional sports. Each one represents a rich heritage and narrates eras from the history of Bedouin tribes and ancient Arabia. This seafaring nation has epochs of its coastline’s antiquity buried under its deep waters since the era of the Persians, who controlled the coastal centers of Oman to the arrival of Islam in the 7th century, following which the peninsula witnessed the arrival of the Portuguese and the Ottomans.

Besides harboring history, this coastline was a vital medium for trading commodities between the Middle East, India and East Africa. For this purpose, sailing vessels with masts called dhows were constructed, which carried crews on board singing sea shanties as they hauled on the ropes and made a living. The sea then began to breed dauntless tribes who would compete in dhow races and the thrill of which made dhow racing an Omani sport.

Oman’s seaside location makes it the ideal spot for dhow racing enthusiasts. The term dhow is not an Arabic word, it was adopted by the English writers, perhaps from the Persian ‘dawh’ or from Swahili word for boats ‘daw’.

Besides this water bound amusement, camel and horse racing are popular spectator sports. Camels are bred and trained for racing from the age of two, mainly in the interior regions of the country. Winners are highly rewarded and prizes range from cash to cars. Also, winning camels are sold for vast amounts of money, ranging from RO 60,000 to RO 100,000 (app. EUR 120,000-200,000).

The animal on whose back has ridden many a civilization, horses are dressed and ornamented in a fashion that symbolizes their nobility within the Arabian culture. Horse races, polo matches, show jumping and dressage are highly rewarded events which are ardently played and watched. While most horses are owned by the Royal Stables or Oman’s Royal Cavalry, there are a few private breeders as well.

Bulls were traditionally used for heavy labor but the origin of bullfighting in Oman is vague. Many believe it was brought by the Moors of Spanish origin others say it has a direct connection with the Portuguese who colonized the Omani coastline for nearly two centuries. Bullfighting is held in the interior regions although its frequency has lessened over the years. Though there is no official prize given, the price of the bull hikes up after each win, and can range from RO 500 to as high as RO 2,000.

Known as the game of the wealthy, falconry is a sport that involves taming and teaching the falcon to hunt for its trainer. Falconry was originally practiced by Bedouins to hunt hares and other birds for food and later developed into an esteemed sport. Omanis possess the deft for falcon hunting and training which requires a lot of patience and acumen to tame the bird.

Football, basketball, waterskiing and sand surfing are amongst the many present-day sports that have become popular in Oman, and traditional sports are gradually taking a back seat amongst the younger generations. Yet, even with the surrounding modernity no contemporary game can replace the national pride and nostalgia of a traditional sport.