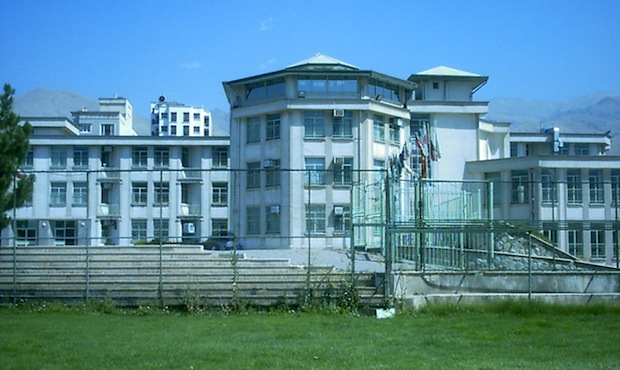 Iran’s preeminent school for international education is just like any other school, says its alumni. One of them ­– Holly Dagres – looks back at her time at TIS.

Before the revolution in 1979, the Tehran American School was the place to be for international education in the Iranian capital. Children of expats as well as small numbers of Iran’s elite were educated in English and taught by American teachers. When things took a turn for the worse politically, the year prior to the revolution, the school was shut down. The students were evacuated alongside their families, with the majority never setting foot in Iran again.

For those who lived in post-revolution Iran, the school’s replacement became known as Tehran International School, better known by its alumnus by the acronym ‘TIS’. Founded in 1985, its outdated website describes it as having “the goal to build educational links to other countries and render educational services to foreign students in Iran.” For those who attended, myself included (1999-2006), it did just that.

“Meeting people with diverse backgrounds and cultures made me understand the world from a new perspective. These people were like family and I was able to learn things from them,” Debra Ogunsanya, a daughter of a Nigerian diplomat, said. She described TIS as one of the best experiences of her life, and her feelings are part of a consensus shared by those who attended.

Located in the trendy north part of Tehran, TIS was gender-segregated. The girl’s school was located in Sharake Gharb and the boy’s school in Saadat Abad. Both schools were divided into two separate branches, the international school and adaptive school. At the international side, students studied in English, which depended on British books and curriculum, whereas the adaptive side helped Iranians who had lived abroad to adapt to the Persian language and Iranian school system. The schools were exclusive and the Iranians who happened to make it to the international side were considered to be the lucky few.

Debra claims that separating the boys from the girls was not much of an issue because “it was not a boarding school, and the boys school wasn’t far from us as we all met each other after school hours.”

The students attending both schools always found cunning ways to try to mingle with the opposite sex.

“We would sometimes finagle our ways into getting off early at the end of the day, pile into a classmate’s car so we could ride with them to the girl’s school. While they picked up their sisters, we would chat up the girls,” remembers Matthew Meier, an American who was a student at the school from 1990 to 2003. It seemed that almost everyone has a similar story to share.

Occasionally the weekends were dedicated to hangout sessions and house parties, sometimes hosted in the homes of diplomats and even ambassadors. Having diplomatic immunity meant not having to worry about the morality police stopping by.

“The parties made it possible for people from different grades to get exposed to one another and become closer with one another which made the school even more fun,” says Nima Del, an Iranian (1994-2006).

TIS students are expected to wear the national Islamic uniform like other schools in Iran. For girls, that meant a manto (a long tunic) and maghneh (a habit-like scarf), for boys that meant a collared shirt and pants. The rules were strict, but mostly broken.

Islamic decree may have existed outside the four walls of the schools, but the students rebelled and pushed back the Ministry of Education’s attempts to bring TIS in line with Islamic society’s rules. Many things were forbidden – dyed hair, hats, jewelry, MP3s, cell phones, jeans, nail polish – but there were those who attempted to defy the law.

“I think it was part showing rebellion to the school administration and being cool, which is a lot like middle school and high school culture everywhere I’ve been. It’s just being a teenager and acting like you’re something special, doing your best to impress your peers,” Sanam Amin (1998–2001), the daughter of a Bangladeshi diplomat, noted.

Just by scanning YouTube, popular videos surface of dance-offs and petty school fights show that TIS was just like any school abroad. One of the best examples of TIS school life is captured in a video of two TIS girls dancing to the American rapper Soulja Boy’s ‘Crank That’.

Afrooz Ghadimi, an Iranian (2004–2010), says the friendships that she made were the most important aspects of TIS. “These friends are now all scattered across the globe, but I still communicate with them on a daily basis.”

Thanks to social media, TIS alumni are able to stay in touch through Facebook, Skype, and texting applications like Whatsapp. Most are fortunate enough to cross paths on vacations or end up as invitees to weddings.

Given the amount of media attention surrounding Iran’s controversial nuclear program and the talk of a potential military strike by Israel, it is interesting to hear an array of political opinions from those who attended TIS.

“For quite a few years now I’ve thought about how upset and angry I’ll be if Iran is invaded, because war destroys many of the accomplishments that Iran has made. I’m of the opinion that people need their basic necessities first, even before their rights, and in many ways I think those things exist, while rights are being violated,” Sanam said.

Amir Pasha, an Iranian who attended TIS for elementary and part of middle school (2001–2006) holds a different view: “I hope one day this regime leaves. Iran’s situation is critical.”

On the contrary, Afrooz feels it is not her place to talk about the political situation of Iran. “Every country has its ups and downs at any given time,” she said.

With the storming of the British Embassy in fall of 2011 came the closing of the British school. At some point, there was even talk of schools hosted by the French, German, Italian and Pakistani embassies in Tehran being shut down as well. In the meanwhile, TIS continues to flourish and produce alumni who end up in various parts of the globe. Given their experiences, they have the potential to be future leaders in Iran or abroad, whether it is in business, medicine, fashion or politics.

Only time will tell if the international schools of Iran, including TIS, will experience the same fate as Tehran American School. Despite that, there is one thing that certainly will never change, that Tehran International School was just like any other school.