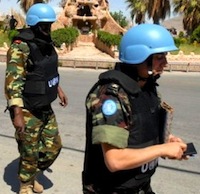 Chinese stratagems are ruses used in politics and war. They aim to achieve success through unorthodox and deceptive means. “Watch the fires burning across the river,” is one of my favorite stratagems. Applied to warfare, it means to delay entering the battlefield until all the other players have become exhausted fighting each other.

These days, two weeks before the end of 2012, the “fires across the river” are burning in Syria. For 20 months already, opposition forces have battled the Syrian army of Bashar al-Assad. The fighting has caused more than 40.000 casualties. Until today, both parties were unable to win this war.

The number of spectators, watching from the sidelines of Syria, is vast. The Syrian political opposition in exile, the United States, Turkey, Saudi Arabia, Qatar, Russia, Israel and Iran: they all aspire to hedge their geopolitical bets in Syria. They are all ready to take advantage of worn-out actors and a devastated country once the fighting nears its end.

There is an underlying factor in both parties’ failure to reach a decisive victory on the battlefield. None of the fighting groups was able to convince the Syrian audience – the civilian population helplessly watched an all out war unfold – to clearly take their side. Why should Syrians support an Assad regime with a record of oppression and a disgust for human rights? Which alternative does the opposition provide? Their message remains murky and a well crafted, balanced political program for the time after Assad is still missing.

Much of the fighting on the opposition side is done by groups endorsing a jihadist ideology. Bearded men, hardened by fighting the enemy in Afghanistan and Iraq, have come to Syria for the final battle. In the latest edition of Inspire, a jihadi online magazine published in May of 2012, Abu Suhail from Yemen discussed the events in Syria. “Where are the people of al-Sham (Syria),” he asked, “when will they show what they are made of?” Because, Suhail went on, quoting a hadith: “the foundation of the state of believers is in al-Sham. When the great trials occur, Allah will send from Damascus helpers, from the most noble knights of the Arabs, and the best of them in weaponry.”

The best known among these jihadist groups is the Nusra Front (Jabhat al-Nusra). They are responsible for many suicide attacks, car bombs and beheadings that killed dozens of Syrians in 2012. The origins of the Nusra Front are unknown; the first attack for which they claimed responsibility came on January 6 of this year – ten months after the first anti-Assad protests began.

In a recent seminar on the current situation in the Middle East, one expert put forward a theory that the Nusra Front is actually an invention of the Assad regime. He compared the situation in Syria to the brutal civil war in Algeria in the 1990s. The Algerian army took part in the killing of the Algerian civilian population only to blame the Islamists for committing these atrocities.

The theory of the Nusra Front being a product of Assad seems far fetched. However, in war nothing can be excluded. While the United States have initially supported these groups opposed to the Syrian regime, they now have second thoughts about it. This week, Washington blacklisted the Nusra Front as a foreign terrorist organization. This is one more sign of just how strong and dangerous the Front is believed to have become.

The United States has a history of using jihadist groups as proxies. They should know how much of a blowback such groups can produce. In Afghanistan of the 1980s, the Americans used jihadists to fight the Soviet Union who had occupied Afghanistan in 1979. The core of these fighters later mutated into al-Qaeda, and Afghanistan became their base of operations.

One thing is certain: the Syrian opposition in exile doesn’t control the rebels on the ground. They are like a pack of hunting dogs smelling blood in Damascus. And when the war is over and Assad has fled his palace, the fighting won’t stop. In the end, opposition groups will fight other opposition groups for supremacy, but there is only one girl catching the bridal bouquet at a wedding.

So how will the political opposition come back into play? This is the million dollar question. I can’t imagine jihadist fighters, who have battled their way to Damascus, to yield their place at the buffet to political figureheads coming back from Ankara, Doha and Paris.

There is another stratagem I like: “in order to capture, one must let loose”. In order to capture Syria, the enemies of Syria have let loose of the jihadi forces such as the Nusra Front. But how can the forces unleashed in Syria be stopped? The war in Syria has been going on for too long, has gone too far to be stopped in an orderly manner. Radical forces have won the upper hand and they cannot be tamed by including them in lists of bad guys.

The proxy fighters the US used in Afghanistan to fight the Soviets attacked New York in 2001. The aftermath of “the liberation of Syria” will be felt closer to home. Syria is on track to a firestorm that has the potential to engulf Lebanon and Iraq, the Kurdish regions, and even beyond. As a person connected to Lebanon, I hope for the best but plan for the worst.