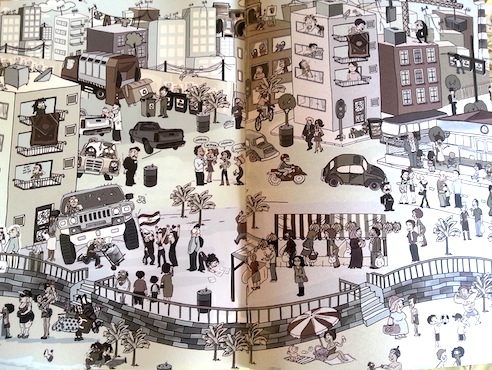 In spite of the heavy December rain last weekend, the trendy Tawlet restaurant in Beirut was bursting at the seams. A long queue of fans of all ages stood patiently while the pretty, pert Zina Mufarrij signed copies of her first book, based on the immensely popular cartoons from the blog Zina Comics.

The title “ikht hal balad … Chou B7ebbo!” (translates roughly to **** this country…. how I love it) says it all. Mufarrij has a love-hate relationship with Lebanon, and a unique way of expressing it. Her cartoons portray Lebanese society critically and with candor, but also with wit and a certain degree of tolerance. Like one of her characters, BZZZ the business fly, her eyes are keen and perceptive, and she is uncompromising in her judgment.

The book opens with a complex and panoramic view of Beirut. The image is akin to a tapestry, depicting every aspect of life in this busy and chaotic Mediterranean city. We tend to think of cartoons as modern cultural artifacts. I found out recently that tapestries – an art that is a thousand years old – all begin with a design called a cartoon. In fact, the Bayeux Tapestry, has been referred to as the first known comic strip.

The architect Le Corbusier is said to have called tapestries “nomadic murals.” This term is particularly relevant to “ikht hal balad … Chou B7ebbo!” Like many other young Lebanese people, Zina Mufarrij chose to move to Canada. But like her peers, her heart is firmly rooted in the madness of Lebanon. So the cartoon character Zina, a modern day nomad of sorts, carries Beirut in her compendium of recurring characters such as Madame, the vapid and surgically voluptuous blonde virago; Mam, the patient mother, the transmitter of Lebanese culture who supplies Zina with advice, teaches her how to cook Lebanese dishes, and guides her in the social mores of polite society; and of the hardworking, unobtrusive Coussouma, the Buster Keaton-like Asian domestic worker who never lets on what she is thinking – yet all involves her and revolves around her: her employers are helpless without her yet she barely exists in their world.

Mufarrij’s drawings are rendered with skill and brio – and her pen registers everything – the ubiquitous taxis and motor cycles slaloming through the narrow streets, the construction cranes that hover over the city, the electric cables that festoon every street, the stalls displaying fruit and vegetables, even the bright green garbage trucks that wend there way at all hours of the day and night to keep the city clean. The double standard and contradictions of Lebanon are all noted. She has no qualms about showing the racism of some, the sublime inefficiency of public services, or the hypocrisy and snobbism of Lebanese society. True to the Lebanese experience, the cartoons intertwine three languages, Arabic, English and French. Mufarrij constantly reminds us that life in Lebanon can be a caricature, but she does not openly condemn nor does she indulge.

In fact, Mufarrij sheds light on the foibles of the Lebanese as well as their resilience. The little ironies that make up each cartoon strip also transmit the strong sense of family and of community shared by the Lebanese. This is particularly felt in the set of cartoons that are set in Montreal, where the Zina character is invariably pictured alone, in stark contrast to the Beirut cartoons, where she is always surrounded by a menagerie of people who all know her very well.

When I asked Zina if she had plans for more publications, she very astutely pointed out that, this book being clearly marked number 1, she is committed to a series. She is in fact already working on Book 2 and has a third project in the works.