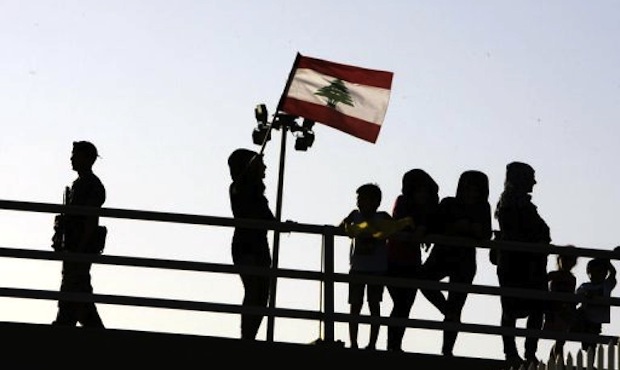 The Lebanese have developed a unique ability to make fun of any type of bad situation. But this defense mechanism, while often amusing, is not a positive sign, but rather one of hopelessness and indifference, writes Ziad Naboulsi.

The storm Lebanon is facing is not political this time, it is of natural causes. A polar snowstorm coming from Russia reached the country last Saturday, drowning it in an unprecedented rain shower that crippled daily life. Four people were reported dead, accompanied by huge damages to public and private property. Pictures of people sitting on their drowned cars in the middle of rivers that used to be roads are very common today in Beirut. Hundreds of houses were flooded in what seems more and more like a scene from a movie of what Lebanon will be like after a being struck by a devastating Tsunami.

What is more bizarre than scenes of floods and sinking cars, is that the Lebanese people, as always, bombarded social media sites with jokes and satiric comments that made fun of the current situation. This kind of humor was mastered by the Lebanese after decades of continuous wars, civil strives and natural disasters. Comments like: “I just hit a whale on an intersection,” or “Anybody with a boat can drop me off at work because I only have a car,” or “I told you Noah was right!” or “a mermaid was caught with prostituting in Beirut,” or “All schools closed except for Fish schools,” were shared and retweeted in the Lebanese social sphere.

Whether it’s a car explosion, people burning tires, armed clashes between militias or floods you’ll find the Lebanese making fun of the situation and inventing jokes. It is amazing how they have the ability to turn any national disaster into jokes and comments. This is one of the little things that this fragmented and divided country has to bind its people: humor, the dark kind. However, humor is a not a healthy sign at all in Lebanon, it is a sign of the hopelessness, indifference and surrender to the hard reality the Lebanese have reached and are living every day.

These jokes contribute to bringing the Lebanese to a state of mind described as the “weed effect”; distracted from the initial problem – which they should be furious about – they compete in sharing and laughing about jokes they create. Making fun of every disastrous situation keeps the Lebanese from pointing fingers in the right direction: in the face of the government that failed and keeps failing to protect its citizens from natural or man-made disasters. To some people making jokes is a good indicator of the sense of humor a population has and its willingness to laugh and live no matter how bad the situation is, but coming back to reality, this is a really bad sign.

ALSO READ – TEDxBeirut: All we need is…?

But its seems that the Lebanese frustration was transformed into dark humor, and the only feelings of anger left are the ones directed towards each other, that shows itself sometimes by skirmishes or the mini civil wars they practice against each other every now and then. The feeling of indifference that the Lebanese feel towards the hard living conditions they endure is one of the last indicators that Lebanon has very little hope to become better, move forward and prosper. The ability to tell jokes at every disaster is making the Lebanese too “high” to claim what is rightfully theirs: a life with dignity.

The Lebanese seem to be cheerful, lively and outgoing but the main reason for these mocking jokes for the Lebanese is to escape their harsh reality: the fact that foreign actors, religious leaders, political parties and basically everyone can control, influence and even determine their lives, but they can’t.

The Lebanese will literally “sleep with the fishes” in these coming days, and the worst thing is that all they can do is joke about it.

The views expressed in this article are the author’s and do not necessarily correspond to those of Your Middle East.