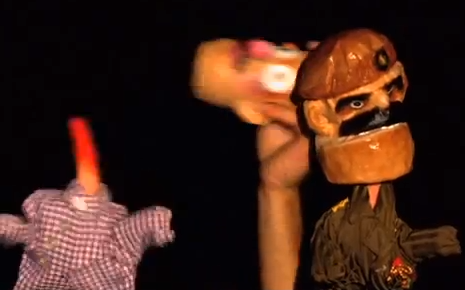 Finger puppets targeting the situation in Syria and the Assad regime with witty dark humour, that’s ‘Top Goon: Diaries of a Little Dictator’.

The Syrian group of artists ‘Masasit Mati’ created this web-based series that uses comedy and satire to lampoon President Bashar al-Assad and the Syrian regime’s response to the popular uprising in the country. The series of 6-minute shows first aired on YouTube in November 2011 and quickly became a hit, both in Syria and the rest of the world.

The power of Top Goon is in the combination of dark humour and sharp words, something not accepted in ‘real’ life in Syria. The artists perform a courageous and dangerous job by creating the series.

The main characters in Top Goon are:

Beeshu: a hysterical man-child, son of a notorious, brutal dictator; an oppressive, bloodthirsty ruler who suffers from a minor God complex while at the same time feeling persecuted. The Goon: Beeshu’s most important security chief and the blunt instrument of the oppressive regime. Dumb, illiterate, unable to think for himself.Individuals from all segments of Syrian society. Parts of the revolutionary movement who rose up against Beeshu. They have their own feelings and dreams and failures.

The first episode is called Beeshu’s Nightmares, in which Beeshu askes himself: ‘”Why don’t the people of Syria love me anymore”…full of self-pity.

Another great episode is Syrian Idol where all top goons of the Syrian regimes make their appearance. And of course Beeshu wins 99.99 percent of the votes…

Yet another favourite is Who wants to kill a million? where Beeshu competes with Khaddafi and Mubarak to reach as many killed as possible. Horrible and witty.