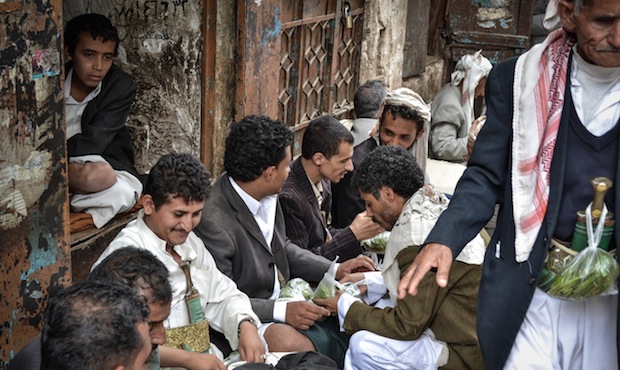 “Seeing those tanned, hard working faces pull out the damned Qat trees and plant coffee, olives and almonds makes you feel that there is hope,” writes Hind Aleryani, founder of the campaign for a Qat-free day in Yemen.

It may be hard for some to believe in the impact a single Tweet can have, especially if it takes place in a country like Yemen, where illiteracy is high and widespread. However, my story proves that the number of users is not as important as the number of those who perceive it.

This is what happened in more than one social media campaign. It all started with “Shame on Reuters,” which was strong enough to result in the discharge of one of Reuters’ reporters even though the number of Yemenis on Twitter was small.

The campaign made Yemenis realize the power of social media and how it could lead to change. Even though most of them resided abroad, technology allowed them to make an impact in their country. Many Yemenis living abroad got their hopes up when the campaign “A day without Qat 12 January, 2012” was launched. Living abroad has enabled them to see the impact of Qat from a different perspective and has given them a clearer view on the negative multidimensional social and economical effects Qat has on both the country and individual levels.

Despite the fact that Qat causes a number of negative effects, including health problems, this campaign did not address the health dimension but instead focused on the macro level and discussed the effects of Qat on Yemen as a country. This is clearly reflected in its slogan: “I am a Yemeni who wants change and will not chew Qat on the 12th of January.”

With the increasing patriotism during the Arab Spring, it was inevitable for us to look at ourselves and reflect upon our actions and see whether or not we were unknowingly contributing in a negative way to our country. If we could admit that we were indeed negatively affecting Yemen, then we should first begin by changing ourselves before asking others to change and by that prove that we surely loved our country and were genuinely seeking change.

Yemen is a country that suffers from drought and depends mainly on ground water, where finding and drilling is a complicated and costly process. The fact that 60-75% of this scarce resource is wasted on watering a drug that has several serious health implications and is economically harmful is very troubling. When you know that your country prefers planting Qat over other essential crops and instead resort to importing those essential crops from abroad, you realize that there is an evident mismanagement of resources that is detrimental to the country’s economy.

RELATED – Special Report: A glimpse into Yemen, a nation chaotic

The campaign began with one tweet, and I chose January 12 because it was a Thursday, which was a popular day among Qat chewers, being a weekend. Many people reacted to this tweet and the campaign reached Sana’a and Taiz via “Generations without Qat,” which was based in Taiz and also through the coordinating council  “Tanawo” in Sana’a, in addition to the buzz through Yemeni and non Yemeni media. Due to this media buzz, many people asked for a day without Qat every month, however, I believed that there should be a day without Qat to call for a legislative action against Qat and help solve even one of Qat’s many problems.

And on January 12, 2012, it happened, a day without Qat for governmental institutions.

The effect of this campaign was stronger on the ground resulting in the creation of five different groups from five different governorates (Sana’a, Aden, Taiz, Hudaida and Dhamar). The activists distributed flyers in governmental offices and visited schools. Some of them paid the campaign expenses from their own pockets and some couldn’t print colored flyers but the goal of this campaign was stronger than anything else. The campaign caught the eye of the Minister of Education and the Minister of Information, causing a big stir.

The participants in these campaigns were diverse, some never fought against Qat before, and others were institutes that were completely against Qat. The campaign could not have succeed hadn’t there been an organized institutional plan and that’s how the idea of the organization “Eradah foundation for Qat-free nation” was born, grouping the campaign participants into one organization. The foundation proposed a law against Qat that was written by attorney Omar Al Himiari, one of the campaign supporters in Taiz.

The foundation then began a new campaign under the name “Yemeni Weddings without Qat” with the goal of organizing wedding ceremonies in a Qat-free environment. If it was possible to break such a deeply rooted tradition and make hundreds of people gather and celebrate without Qat, then we would have achieved a positive change. We would have changed the concept of “impossible” to “everything is possible,” which is what happened.

Many people doubted the possibility of implementing such an idea, saying that “this wedding with no Qat will never succeed because nobody would go to a wedding without Qat, how would Yemenis spend happy times without Qat? That’s impossible.” However, with hard work and great dedication, we proved them all wrong.

Not just by having one wedding without Qat but seven successful Qat-free wedding ceremonies that left a significant fingerprint in the Yemeni society, more so than any wedding with Qat would have. Now more Qat-free wedding ceremonies are being organized. These weddings broke a social barrier and proved that weddings can be Qat-free. I went to Yemen and attended the first wedding without Qat and even though the wedding was segregated and was “men only,” I couldn’t resist the idea of seeing this day with my own eyes: a wedding with 800 attendees with happy, cheerful faces with no bump on their cheeks. That was, by far, the happiest day of my life.

After the wedding we, the members of the foundation, decided to take a stand in front of the Parliament demanding a law that would ban Qat in governmental facilities. We met the speaker of Parliament who said that there was already an exciting law banning Qat, but which was not implemented, even though it highlighted solutions to all problems caused by Qat, from health issues to agricultural issues, and even social issues. One month after the stand, the law was discussed, but rejected by some representatives who feared they would lose their source of income. Despite that the law, which was written by parliament representative Dr. Najeeb Ghanem, assured gradual steps to banning Qat in order to not negatively affect anyone, farmers, sellers or those who chew. Surprisingly, one of the representatives stated that Qat was a “green gold” and opposed the passing of the law, claiming that there were more important things to discuss. The law is supposed to be discussed in a few months again, then we will have another stand demanding the implementation of this law.

We encourage the uprooting of Qat trees like the recent uprooting by the people of Haraz who always uproot Qat trees with the help of the Buhra Sultan who supports them agriculturally. Our role here was to shed light on these people and praise their initiative. A total of 3,000 trees were uprooted this time, and for the first time a Yemeni channel broadcasted a campaign encouraging people to uproot Qat trees with the support and participation of the Minister of Agriculture himself. We pray that such actions continue and we aim to support these farmers. Even if we start off with only a few pieces of land, it will surely encourage others to do the same. Seeing those tanned, hard working faces pull out the damned Qat trees and plant coffee, olives and almonds makes you feel that there is hope, hope to see Yemen plant, eat and export its own crops and to see Yemen prosper again just like we’ve always hoped it would.

The views expressed in this article are the author’s own.

YOU MAY ALSO LIKE – Mayar Kotb: The limits of the “feminist” discourse in the Middle East