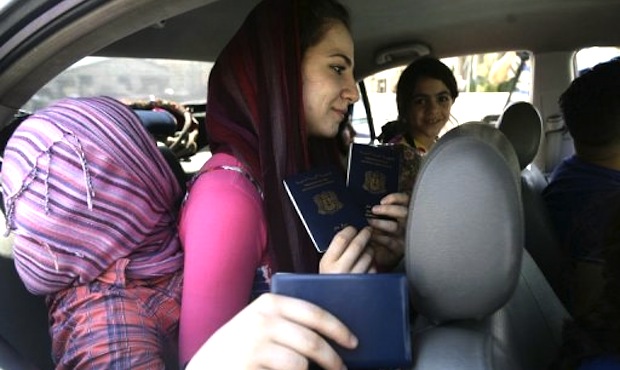 On a sunny day, the villages scattered across the Akkar district in northernmost Lebanon are the picture of timeless Arab countryside: dusty roads, lush gardens of herbs and tomatoes, and the gentle green valley of the Great River, which marks the border with Syria.

I first visited Akkar in February of last year. I recall standing in front of a home in Aamaret al Bikat, looking north, watching and listening for any evidence that a war was unfolding just a kilometer or two away. This week, I needn’t have left the house: the crack of automatic gunfire was audible from the living room.

READ MORE – The Lebanese civil war is far from over

The war next door has begun to define day-to-day life in Lebanon’s north. The security situation is deteriorating and tensions are high. Bombed houses, nightly shelling, a porous border and wave after wave of refugees are pulling this sleepy region almost unbearably close to Syria’s civil war.

Ten months ago the skies above Aamaret al Bikat were quiet. A stream of widowed mothers and traumatised children from Tal Kalakh had filled the village’s few empty houses, and more were arriving daily. Most had crossed the border on foot, and many had been shot at along the way. Two young mothers had miscarried on the journey, no time to stop and grieve.

Resources were scarce for those early refugees. There weren’t enough nappies for the growing number of babies, and a tiny newborn named Doumou3, the Arabic word for tears, needed milk.

Medical care was also in short supply. The mother of an eight-year-old boy who had been shot in the shoulder was unable to find a doctor who would treat him for free. Although her son’s wound was healing, two of his fingers were paralysed. She was desperate and angry.

“We’re refugees, we have nothing – how can we pay for a doctor?”

Bachir Borhan, the owner of a local car firm, welcomed the families to his village. He gave what he could and acted as a guide for visiting journalists. The scale of need was immense and the stories of escape were harrowing. They had fled from unspeakable horrors, but at least, so many of them said, they were now safe inside Lebanon.

But as the conflict has ground on, the old lines of safe and not safe have become less clear. While the Aboudieh border crossing is controlled by the Syrian government, many of the surrounding towns and villages are rebel-held. Firefights are ongoing, and the shelling that started around the beginning of Ramadan has grown louder and more fierce.

Stray shells and gunfire are increasingly finding their way across the border. Driving east from Aboudieh, a damaged home lurches out over the road. It was bombed four days ago and the mortar, which failed to explode, is visible from the road, wedged between wall and roof. The family has gone to stay with relatives further south.

In Debabiyeh, a village just a stone’s throw from the border, the Sabha family has stopped tending the spare plot of land where they once grew vegetables to sell. It’s on the Lebanese side of the valley and within sight of the Syrian troops who guard the border. “We need the money,” the mother of six says over the soft whump of shelling, “But it’s not safe to go there anymore.”

The family left their home one night last month, when the noise and the shaking and the fear grew too much. But they returned the next day. They had to: who else to tend the garden that feeds them, and the cow that provides milk for cheese and yogurt?

Over the past ten months, the complicated dynamics between host community and refugee community have changed. This is an economically depressed region, and with NGOs operating at full speed to provide for refugees, a needy host community has begun to look at the visitors with something that borders on resentment.

This week I met a group of Syrian mothers in the village of Halba, a bleak stretch of buildings on a muddy road banked with trash. We sat around a stove sharing sheesha and jokes as an assortment of children came and went, chubby toddlers in plastic sandals and teenage daughters in hijab. Warm and dry, they live in single-family groups, in old car workshops.

“We haven’t always lived like this,” says Um Noor, a woman whose brother was martyred in Syria. “At home I had a kitchen and a garden…” she trailed off.  “Now my garden is a make-shift cemetery. They’ve run out of spaces to bury the martyrs, so they’re in shallow graves between buildings. Two girls are buried in my garden.”

Rosanna Al Soda, a mother of seven, gave birth to her youngest under a hail of shelling, and left Tal Kalakh for Lebanon two months later. Rosanna is a survivor, a boisterous woman with an infectious laugh and a cuddle for any child who wanders near.

“We love the UN,” Rosanna says. “We get everything we need and we have access to free medical care. The UN is taking care of us all.”

However, there is a sense among some locals that refugees are being given the means for a life far more comfortable than many people in their host community can afford. While Rosanna says her husband is unable to find work, a local man later sighs and says otherwise: her husband spends the day smoking and drinking tea at his office. This frustrates him. “Why should they get things given to them when we have to work?”

READ MORE – Will 2013 be kind on the Syrian refugees in Lebanon?

For the families of Akkar, both the hosts and the recent arrivals, the grind of war has entrenched itself in day-to-day life. The shelling, the gunfire, the tension between neighbours, the trash piles and poverty. Broken houses and the loss of freedom to tend land, grow gardens and build lives. These are the human costs of the war next door, and they are mounting up.