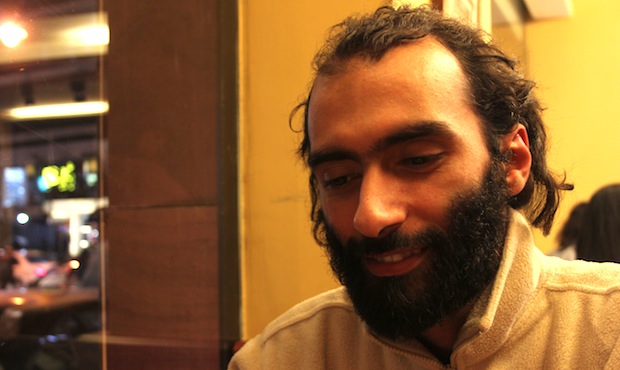 Seven injured men hobble down the corridor on crutches, a white-bandaged, balloon-sized leg trailing behind each. It’s a curious sound: clack-shh, clack-shh. They gather in a half-circle of plastic lawn chairs and rusty wheelchairs before the wiry, kind-eyed man who has called them together.

Ashraf Al Hafny looks at the men and smiles. “To rebuild your country, you must start by rebuilding yourself. And we are laying the foundations.”

These men are part of a unique refugee programme run by a small, underfunded NGO called Ward Team. Al Hafny, its founder, is convinced that people who’ve been damaged by war need more than just a box of food – they need psychological support, new skills and their voices to be heard. He and his team of volunteers are offering this at the Al Irshad recovery centre in Tripoli, Lebanon’s second-largest city, where wounded Syrian men wait for treatment at local hospitals.

ALSO READ – One photographer in Aleppo keeps battling the odds

But it’s not easy convincing broken men to talk about their feelings and learn new skills. Even those who need it most often struggle to see past their own immediate physical problems.

Wheelchair-bound Mohammad Kheir Darwish has the wasted thighs of a man who has not walked in a very long time. He was arrested and tortured by the regime a year ago. His back was crushed.

“I need special equipment to pee. It would be a relief to get rid of it, but I need surgery and physical therapy,” he explains in a quiet voice.

When Al Hafny says that today’s session is about personal development, not surgery, Kheir Darwish wheels towards the door. Two men on crutches follow, a clacking, stumbling exit.

Rami, Ward Team’s volunteer psychologist, steps forward. “Each of us has skills,” he tells the remaining men. “And we’ll try to provide you with the material to develop your skills, like painting, sculpture and drawing.”

At this, a tall, quiet man with a full beard looks up. He used to be a sculptor before his leg was badly broken. Since arriving at the centre he has been encouraged to draw. His first sketch, ballpoint pen on notebook paper, is a delicate, detailed outline of the minarets of a mosque. A wave stretches out in the distance. When asked who would be interested in drawing, he raises a tentative hand.

Al Hafny explains that English and computer classes will begin the following week. There’s a ripple of interest. A few men take the pens and paper offered by Rami and begin making lists of the things they want to learn.

It all seems promising. But at the end of the meeting, as the last patient wheels out, he pauses and turns back to Al Hafny. “How do we know this is different?”

Later that afternoon, over tea and Damascene biscuits, Al Hafny explains how Ward Team is different from other NGOs. While the organisation works with both children and adults, the programme at Al Irshad is the only one in Lebanon to offer psychological support and skills training to injured adult refugees.

“Our goal is to rehabilitate these people, to give them valuable skills and encourage them to give back to their communities once they return to Syria.”

Al Hafny, a career aid worker, spent six years working with Iraqi children in Syria – time enough, he says, to witness the lasting psychological damage war wreaks on refugees. Yet when he arrived in Lebanon in September 2011, a refugee himself, he was surprised to find there wasn’t a single NGO offering psychological support to adults. Al Hafny thought the need was obvious.

ALSO READ – Will 2013 be kind on the Syrian refugees in Lebanon?

He volunteered at the Al Shifa and Al Abrar hospitals, where overstretched doctors and nurses lacked the resources to address the problem.

“It was always a case of ‘just do the surgery, leave them till they get better and that’s it – that’s all we have to offer’. That really was all they could offer.”

Convinced he could do more, Al Hafny founded Ward Team in July 2012 with start-up funding from the Qatar Red Crescent and support from Al Irshad Al Islam.

Training began in August – teaching volunteers to identify psychological distress and help patients through it – and in September Ward Team began offering support to the wounded refugees at Al Shifa hospital. They initially faced skepticism from staff and patients alike.

“These people had seen so many things start and heard so many promises that weren’t kept,” says Al Hafny. “But I wanted the patients to know that someone cared.”

Very quickly, they did. When that first group of patients was discharged in October, tiny Ward Team was invited to work with the 65 wounded men at Al Irshad.

They began by inviting patients to work through a 101-question assessment covering childhood, work experience, skills and goals. Al Hafny and Rami wanted a sense of what the men’s lives had been like before they became refugees, and what they wanted now.

The results showed that the patients weren’t psychologically damaged. They were isolated and unhappy, cut off from their old lives and struggling to adapt to changes in their bodies. But they also had an abundance of free time and an interest in learning new skills. That was when Ward Team’s mission grew from psychological support to retraining and rehabilitation.

Al Hafny believes it is paramount to establish the rebuilding process early, and he’s convinced retraining is part of that process. “There’s a purpose to what we’re doing here,” he says. “We could fill their time with anything, but this is about the longer term.”

“Most of the men here did labour jobs, and many have lost hands or legs or even both. About 40% of them won’t recover. But when the fighting is over they will go home, and we think those who learn new skills here will have better opportunities when they return to Syria.”

For wounded, homeless men with families to support, these skills could provide an alternative to the cycle of dependence, poverty and violence.

Even with the day’s small turnout and near-constant exodus, Al Hafny was optimistic about the results. “Today, reaching four men, that was a start. They will affect the group in a positive way.”

And they do. The week after that town hall meeting, a Syrian university professor dropped by to teach an English class. Just two men showed up, but the following week there were seven.

Computer classes have started too. Wifi is uneven at best and there are only seven laptops between patients and staff. So they share. They began by creating email accounts and learning to search the web. Next week: YouTube.

After the second computer class, a man with one leg wheeled over to his teacher, a 19-year-old computer science student volunteer. “Today was the best day I have had since coming here.”

It’s feedback like this that keeps Al Hafny going. But the future is uncertain. There are more wounded refugees every day, and Ward Team is struggling to find the funding it needs to continue, much less grow. Al Hafny would like to offer electronics courses. He’d like cameras to document the transformation patients are going through. And he’d like a centre of their own and a website – not just a Facebook page.

For now though, he’s content to offer support, skills and hope to the men who have been chewed up by the conflict next door, regardless of who they are or what they believe in.

“Patients are patients. Some are civilians. Some fought with the FSA, some with the regime.” Al Hafny shrugs. “They’re all human.”