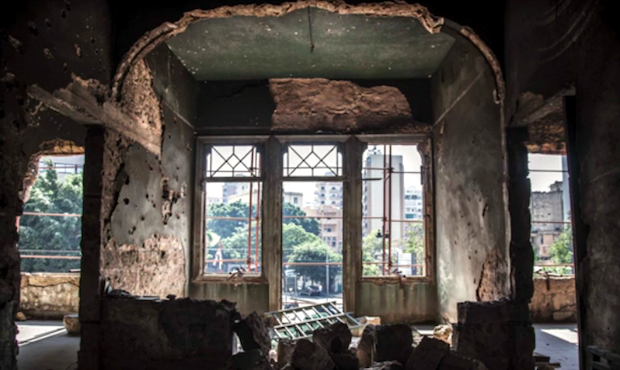 A landmark of the Lebanese Civil War, when it was a nest for snipers during 15 years, Beit Beirut is now set to become a museum in 2014.

A rich Lebanese family, the Barakats, used to own Beit Beirut which was at the time called “La Maison Jaune” or “The Yellow House”. Its “see through the sky” architecture was once a model of innovative design. But the Art Deco architect was unaware that his space design would become a tactical war structure.

In 1975, the civil war began in Beirut. Unfortunately, Beit Beirut was located on the demarcation line, or the Green Line as we used to call it – the separation point between the Eastern and Western parts of the city. Due to its design and location it became a favorite snipers’ nest during the 15 years of civil war.

The building was commanded by the militias of the East side in order to control this entrance to Beirut. Here, on Damascus road, there was nothing except sand and signs that read, “Beware snipers”.

The snipers that lived and used the building had found an architectural design with ready visual axes, which permitted them to hide in the back rooms and kill people in the front. They had seven transversal openings through the building to aim.

“That’s when we realized the importance of this building’s transversality”, said Mr. Rachid Achkar, Council Member of the Municipality of Beirut, and a passionate architect.

To protect themselves, snipers built walls 1.80 meters thick. Camouflaged behind these wooden doors, it was impossible to spot them from the outside. From the other side of the back rooms, walls can be seen with holes caused by the shrapnel wounds and massive bombings, while these protected rooms stayed intact for 15 years. The shooters were safe.

And while they were hiding in these rooms, affected by the war, the snipers had a strong desire to express themselves, leaving traces of their feelings, personal lives through engravings on the walls.

“I want to tell the truth, my soul flew away in a minute,” signed by Begin. “If my love for Gilbert is a crime, let history witness I am a dangerous criminal,” signed by Tarzan, Katol and Begin. “Katol passed through here, with Gilbert I shall die”.

“We definitely killed, people surely died in this intersection. But we survived to defend. And the best way to defend is to attack,” said a former sniper who wished to remain anonymous.

This overlap between a genius architect and smart snipers makes Beit Beirut an iconic structure. War left its traces in it; the holes in the walls speak for themselves, but in a struggle to preserve the post war heritage, these are scarfs that we do not wish to forget. Rather, we seek to learn from them so that history doesn’t repeat itself.

EDITOR’S PICK – The art of skateboarding in Lebanon

Beit Beirut will be protected and preserved, to be a museum of memory; a cultural and artistic meeting place illustrating a reunited Lebanon. It will take almost two years of rebuilding and renovating, making sure every single characteristic is kept. It will be a “green building”. Its doors open in 2014.

Beit Beirut is preserved by the Municipality of Beirut.