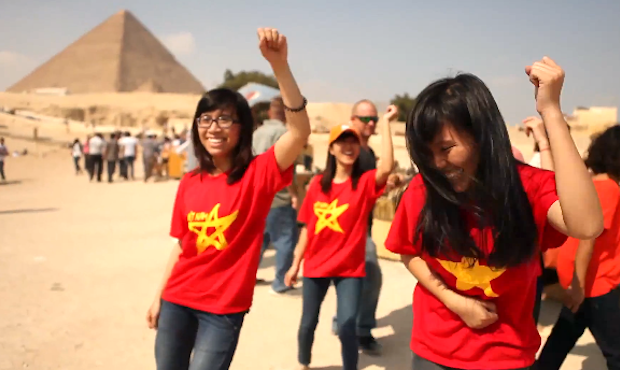 The YouTube hit ‘Gangnam Style’, by Korean singer PSY, also hits the Arab world. It is heard in cities throughout the region, including Sanaa (Yemen), as YME contributor Adam Baron reported last December.

Many local artists were inspired by PSY and created their own version of this hit song. The original tune parodies the lifestyle of rich Koreans. The Arab versions target local habits and way of life, in different forms and styles. Some examples include:

– Egyptian Style. Egyptians have a name to maintain as funny people. Well done with this ‘Hobba Egyptian Style’. It’s a hilarious insight into the elite of Egypt; sushi, jazz, Facebook, Twitter and laptops.

– ‘Saudi Style‘. It features a sarcastic depiction of the phenomenon known in the Saudi society as “the guy in undershirt and thobe pants.” This expression refers to young men who wear white undershirts and thobe pants which look more like undergarments. Click here for a detailed account of this phenomenon.

– Moroccan Style. This is a video parody by a group of Moroccans, ‘singing’ the official song.

– Algerian Style. Animation style video and singing about the European lifestyle some Algerians like to pursue.  Many more can be found on YouTube. Some are professional, some funnier than others, but there is enough to enjoy! As Adam Baron stated in his piece on Gangnam Style in Sanaa “what unites us is ultimately more powerful than what divides us. Regardless of culture, religion or language, people are largely after the same things.”

For the past few months, that has clearly been Gangnam Style and the uniting effect of this global phenomenon is obvious.