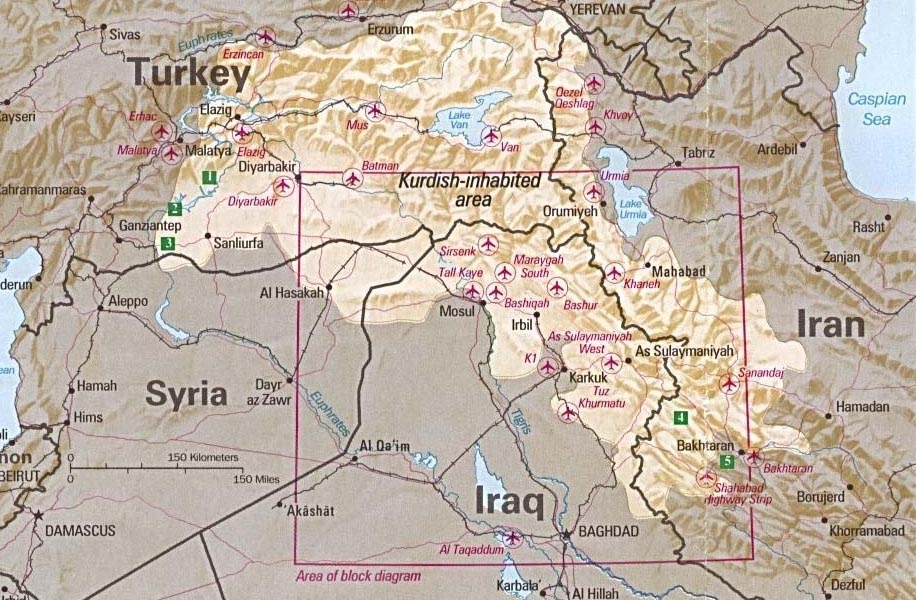 Sofia Barbarani looks at the key issues and problems that characterize the relationship between Iraq, Iran, Syria, Turkey and their respective Kurdish populations.

Following the fall of the Ottoman Empire, hope for an independent Kurdistan was crushed under the weight of the 1923 Treaty of Lausanne. Insensitive to the natural divides, Western partition fueled an already strained social division, perpetuating the Kurdish problem and creating the world’s largest non-state nation.

As Western media pans in on the Kurdish region, the complexity of Kurdistan’s geographic puzzle, political factions and national divisions is emerging and taking its place amongst the key questions in the Middle East.

The skylines of the semi-autonomous Kurdistan Region (KRG) are changing, with new hotels being built to accommodate an increase in tourism. Rated as 34th in a list of places to go (New York Times), and in the top 20 best trips to take in 2011 (National Geographic), tourism is expected to generate about 5,000 job opportunities. A triumph in the heart of a war-torn region.

The rapid growth of tourism and modern infrastructure, however, is only a fraction of the KRG’s evolving nature.

Oil is the name of the game, fueling much of the state’s economic growth spurt. The KRG has signed nearly 40 oil production contracts with international companies, defying Baghdad’s

authoritative grip over oil reserves. Although the KRG’s contracts seemingly fall within Iraqi constitution, Baghdad is unyielding in its refusal to endorse them, arguing that they are illegal. ExxonMobil is currently torn between drilling in Iraq’s rich south, or the Kurdish north; in a decision-making process certain to create an oil shift in the region. According to experts, the US oil giant is more likely to choose Erbil due to preferable terms, infrastructure and rule of law.

According to the KRG, were it not for the federal government’s obstructionist policies, Iraqi Kurdistan could be making $18 billion in oil revenues.

The strained dynamic has placed the city of Kirkuk in the eye of the storm. Located near a large oil field, Kirkuk’s political and legal status has been described as ‘explosive’ in a 2012 National Defense Research Institute analysis. Following November’s altercations, Baghdad and the KRG have been locked in a dangerous military stand-off, further exacerbated by the establishment of new Iraqi military headquarters in the area. Impending elections mean that President Barzani cannot afford to lose control over Kirkuk, a source of unity amongst an often-divided KRG.

Gorran is a prime example of this division; a party which stems from disenchanted Patriotic Union of Kurdistan (PUK) and Kurdistan Democratic Party (KDP) defectors. The imminent end of Talabani’s rule is another political concern; who will act as a buffer between Baghdad and Erbil, and how far will the balance within the PUK be disrupted?

Undoubtedly, the Kurds of Iraq are experiencing a burst of life following decades of persecution. Yet one cannot overlook issues such as corruption, rural poverty and women’s rights; a few of the obstacles faced by Iraq’s Kurds.

Following Saddam’s ouster in 2003, Tehran accepted Iraqi Kurdistan’s autonomy, recognizing Barzani as a potential partner. Iranian Kurds, however, are still regarded as third class citizens by Tehran. Though greater in number (circa 15%), they are yet to achieve a state of semi-autonomy akin to their Iraqi counterparts.

According to a 2010 report by the International Federation for Human Rights, Iran’s discrimination against its Kurdish citizens has not improved since the 1979 Islamic Revolution. Ahmadinejad’s ascent to power in 2005 saw further suppression of Kurdish social and religious rights.

This month, a letter was leaked from the Education Ministry, calling on teachers to refrain from using any language other than Persian. The letter was directed at schools in the Kermanshah Province, a largely Kurdish area, signaling yet another government crackdown on Kurdish culture. This discriminatory state policy has prevented many Kurdish children from accessing education, resulting in high levels of illiteracy and a slowing down of social development.

Like in Iraq, agriculture could represent a major source of revenue. Yet government-placed land mines and the closing of land results in underfunding and exploitation. Iranian Kurdistan is rich in natural resources, and provides a significant percentage of water to the rest of Iran; yet little investment has been made in Kurdish economic development.

Politically, Iran’s Kurds are caught in a cycle of discrimination due to the lack of representation. Neither the Democratic Party of Iranian Kurdistan (PDKI) or the Free Life Party of Kurdistan (PJAK) are recognised, whilst a limited Kurdish parliamentary representation often leads Kurds to abstain from elections.

According to Unrepresented Nations and Peoples Organization (UNPO), today’s key issues are the high number of executions of Kurds and the lack of freedom of expression and religion. Whilst PJAK leader Haji Ahmadi recently suggested a strengthening of the party, the overall status quo remains stagnant for the Kurds of Iran.

Syrian Kurds comprise about 10% of the population, and inhabit the Hasake region in the north and northeast of the country. The case of Syria is particularly stark, as the civil war continues to chip away at the country’s social fiber. Initially, Kurds remained neutral, but in an attempt to protect their region, there have been sporadic bouts of violence against both government forces and the FSA.

At least 56 people were killed in Syria’s Kurdish region in January alone, as fighting continues between anti-government rebels and Kurdish groups intent on securing self-rule.

Whilst violence between pro and anti regime forces shows no sign of easing, the country’s Kurdish areas are being torn apart by their own internal strife. Political cleavages run deep between Kurds originating in the Kurdistan Worker’s Party (PKK) and opposing offshoots of the Kurdish National Council (KNC), supported by Iraq’s KDP. Whilst appearing determined to embark on the path taken by their Iraqi counterparts, the lack of unity is an obstacle – just like it was for the Kurds of Iraq during their own civil war.

Their plight is exacerbated by their statelessness. Syria’s discriminatory policies, and forced Arabisation (the 1962 ‘Arab Cordon Plan’ envisaged the expulsion of the entire Kurdish population living along the border with Turkey, in order to replace them with Arabs) have led to today’s predicament whereby Kurds are being denied basic human rights, such as the right to vote and own property. They are not entitled to passports, meaning that they cannot legally leave and return to their country. There are approximately 300,000 Syrian Kurds who have been stripped of citizenship by their own state.

Whilst the turnaround in the relationship between Turkey and Iraq’s Kurds has been impressive (KRG accounts for half of Turkey’s trade with Iraq, and has even cooperated with Ankara in its fight against the PKK), Turkish Kurds are still part of Ankara’s discriminatory policy, suffering at the hands of a deeply nationalistic government.

Like their Syrian and Iranian brethren, Turkey’s Kurds have been denied the right to receive primary education in their mother tongue. Although a few radio and TV channels currently broadcast in Kurdish, and a symbolic law passed on January 31 allows Kurds to speak their language in court, Kurdish is still deeply frowned upon. Last month, the European Court of Human Rights ordered Turkey to pay EUR 50,000 to five Kurdish politicians who were convicted by Turkish courts for speaking Kurdish during election campaigns.

Turkey’s breech of human rights has been continuously reported as one of the prime obstacles in its accession to the EU.

The government’s acts of suppression can also be seen in the implementation of the village guard system – made up of Kurdish paramilitaries. Originally set up to protect against attacks from the PKK, today they present an obstacle for the internally displaced Kurds wishing to return to their villages following forced exile. HRW still reports on cases of murders, rapes and house destructions at the hands of village guards. They are often targeted by PKK members, who view them as traitors.

In January, the world witnessed the killing of three members of the PKK; including co-founder Sakine Cansiz. Kurdish separatists believe the killings were carried out by an extreme Turkish nationalist group. Whilst theories vary, the fact remains that the killings have drawn another sombre shadow over the peace talks between the PKK and Ankara.

Meanwhile, the Kurds of Turkey live in a state of cultural suppression, in a country which claims to endorse democracy.