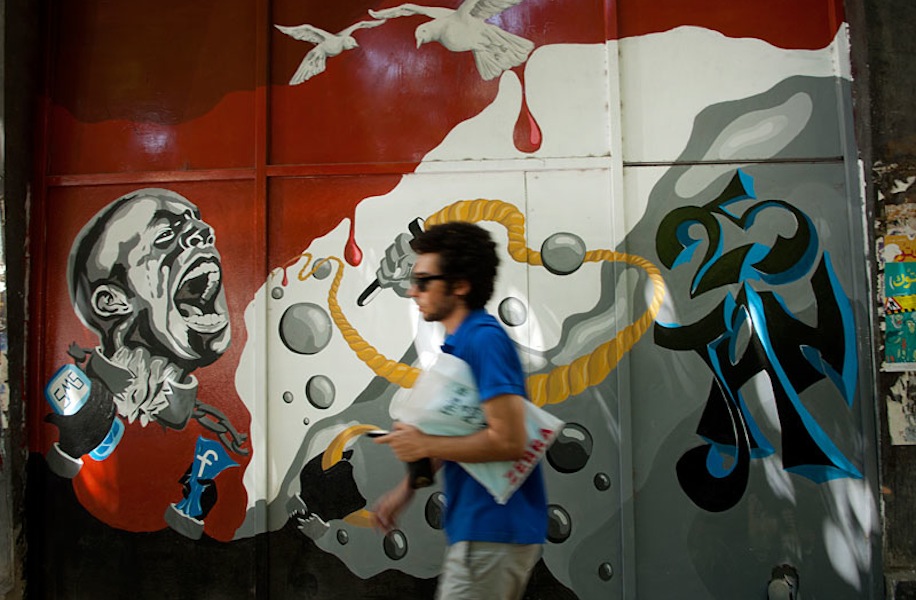 It’s been two years since the Egyptian uprising but many walls in the country remain covered in graffiti, a constant reminder to passers-by of the historic changes the Arab Spring brought to the region.

When the revolution started, many forms of activism emerged; street art being among the most popular. While Tahrir Square became the paramount place for the protests, the streets of Cairo transformed into a canvas that documented what was happening in the country.

During Mubarak’s regime, street art was barely seen. However, it became a phenomenon when the uprising erupted and continues to this day. New graffiti is added or changed as events unfold; from messages ‘game over Mubarak’ in the early days, portraits of  “martyrs of the revolution” and drawings denouncing sexual harassment against women to the latest incidents of the deadly clashes in Port Said last week.

Much of this graffiti can be found today in books such as Wall Talk: graffiti of the Egyptian Revolution, or Revolution Graffiti: Street Art of the New Egypt that will be published in February.

“Graffiti is one of the purest and most sincere forms of expression. This is our soul. This is documenting every battle, every fight,” Sherif Borai, editor of Wall Talk: graffiti of the Egyptian Revolution explained.

The idea of publishing the book originated from an online page that an Egyptian designer, Maya Gowaily, created a few weeks after the revolution started with photos of graffiti that she took in order to document the uprising.

From then on, Gowaily collaborated with Borai to produce a 680-page, photo-rich book that compiles the work of different Egyptian artists, photographers and activists from January 2011 to June 2012.

For example, one of the most representative pieces of graffiti is the eye sniper, as many protesters were shot in the eye by the police security forces during the demonstrations. One of the most famous cases being Ahmed Harara’s, a 31-year old dentist, who lost the sight in both of his eyes.

Some of the most popular works of graffiti can be found in Mohamed Mahmoud Street. It is an important artery for the protests as it connects the Interior Ministry with Tahrir Square. It was also one of the bloodiest places as “more than 120 protesters were killed by the security forces in the first 17 months, 50 of them on this street,” according to Amnesty International.

Although, the government has attempted to erase and whitewash some of the street art, the artists have gone back and repainted them. “In Mohamed Mahmoud Street we can still see layers and layers of graffiti,” affirmed Borai.

Before the revolution, the image of Hosni Mubarak “was never used in graffiti or anything else, and talking about him in any way other than praise and nepotism wasn’t allowed,” explained Karem Ibrahim, Egyptian artist and activist.

However, during, and after the uprising, Mubarak has been one of the artists’ main targets. The same happened when Mohammed Morsi was elected President.

“His image was used so heavily in graffiti and other media forms to ridicule him and his party. Most of the time, there were no attempts by the Morsi camp to punish the culprits,” Ibrahim stated.

He added that the Egyptian uprising marked a milestone in the country’s history in all aspects. “After the revolution, people can say more, and more openly. The holy ring over the ruler’s head is broken and I don’t think it will be coming back any time soon.”

Since the Egyptian uprising began, people have been inspired to fight for their demands with slogans that were heard all over the world, such as “Ash-shaÊ»b yurid isqaá¹­ an-niáºam” (the people want the fall of the regime) or, in this case, with graffiti – a new way to express and describe that the status quo in the region has changed for good.