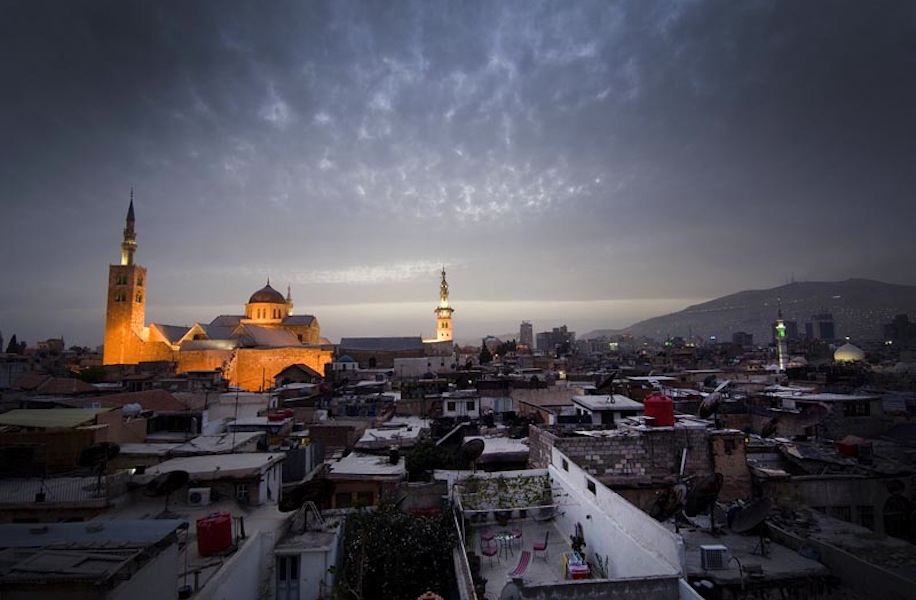 John Wreford still lives in the Old City of Damascus. Here, he gives a personal portrait of life in the Syrian capital.

Having taken a short break from life in Damascus, I arrived back a few weeks ago. I have residency here so leaving and returning is not really a problem. I left via Jordan and returned via Beirut, in both cases the taxi ride was without incident although there are now dozens of checkpoints along the road, sometimes the car was searched and sometimes not and for the most part the soldiers were polite.

Leaving Damascus, the Deraa highway was horribly scarred from war, but once out of the suburbs there is little evidence of two years of conflict.

Neither the Jordanians nor the Lebanese were dealing with influx of Syrians very well, both borders were chaotic with clearly no extra staff made available to handle things. I watched the Lebanese border police using batons, people being made to stand outside in freezing rain. The lack of sympathy and air of contempt can be ignored but the utter incompetence not so easily.

The toughest checkpoint I had to face was the one right outside my house; the neighbourhood where I live in the Old City is regarded as staunchly loyal to the regime and has been armed to protect itself. Since last summer there have been checkpoints on each corner of the narrow streets leading into the area, the militia is mostly made up of residents armed with Kalashnikovs and walky-talkies, some of them like the guy who does my laundry are familiar faces but others are not. I was waved past the first couple but the last one a few yards from my house was not as accommodating, searching my luggage and not being convinced by my papers. Eventually one of my neighbours confirmed I had lived there for a long time, when I left the house later in the day they were all very polite and one even came to apologise on behalf of the others.

Soon after arriving home the power went out; over the last year or so six to eight hour cuts have become the norm, sometimes they last longer. Even before the crisis every summer one or two hours was normal, for the wealthy this is not so much of an issue since generators are usually included in the building. Many shops have small portable generators, dozens of them whirring away along the ancient souk al Hamadiyya, the sound bouncing of the old tin roof, this time though the cut was for three straight days and pretty much all over the city, the wares of the street sellers now reflect the crisis; ad-hoc tables and stalls filled with candles, LED re-chargeable lights and single ring electric hob cookers.

Most people would usually use gas to cook with, but now that is often hard to find and considerably more expensive than before. My bottle ran out at about the same time as the electric went out, after asking around I did manage to get hold of a new bottle but at about five times the usual price.

If there was one redeeming feature about being back home it was the fact the awful sounds of war were not as much as before I left, the shelling and shooting had been constant, helicopters and fighter jets in the sky, random explosions and car bombs, now it seemed quieter, it was all still happening but seemingly less, not for the first time over the last two years have we all been led into thinking things are calming down, soon enough all would change again.

Security around the city was much tighter now, lots more checkpoints and road closures, ID and bag checks, they are not as easy to circumnavigate either now, the central Mahafazat area is now almost completely pedestrianized with bag checks at each entry point. All vehicle access to the Old City is now strictly controlled, banning cars from the Old City is something many people have campaigned for but the government was unable to implement it, until recently.

Army fatigues and Kalashnikovs are common place now throughout the Old City, makeshift checkpoints on the corners of major intersections covered with plastic sheeting to protect against the elements, and sand bags piled in a semi circle to protect against attack. Then there is the Syrian flag and posters of the president just to make it clear who is in control. This of course is the visual security, needless to say there is also the unseen; CCTV cameras have started to sprout, from time to time the military carry out house to house searches, the crash of a rifle butt against metal doors at three in the morning, four times I have welcomed them into my home, slightly confused to be confronted by a foreigner they were usually polite and the search for weapons not very thorough.

Despite all this, people are trying to get on with life as best they can. The Old City is always quite busy, many displaced from the fighting elsewhere have moved in hoping its ancient stone walls will offer some protection, courting couples still wander the narrow lanes and remarkably there is a regeneration project still moving ahead with new cobbled streets being laid, a stark contradiction to what is happening a few miles away in the suburbs.

The market has plenty of food including fresh fish, although the prices have risen considerably. Bread though is a problem with long queues at the subsidised bakeries. In the mini supermarkets packets of bread can be bought at a 100 lira, vastly more expensive than before, and the quest for basic necessities such as heating oil, bread or gas combined with intermittent power has become part of the fabric of life.

The constant sound of war is never far away, the restless suburbs of Qaboun, Jobar and Harasta are just a stone throws from Bab Touma and Bab Sharqi, the ancient gates to the eastern edge of the Old City. On a good day it can sound as if work is going on in a nearby quarry with a dull explosion and crash from time to time but last week things intensified, over a couple of days the sound of artillery shells increased, the sound of gunfights becoming full bloodied. By the third day the shelling was almost constant, the terrifying boom of the canons would shake the ground, I could hear the whistle of the shells as they cut through the air above my house, the doors and windows of my fragile house would rattle in fear, fighter jets scream through the air leaving a daisy chain of smoke and glowing lights. Dirty brown clouds and thick black plumes of smoke hung in the sky above the city.

The next few days things again calmed down but the shelling continues as it has done now for months and months, the warplanes were out again today, both sides have been claiming the initiative, neither sounding very convincing.

Damascenes are resilient, they continue to go to work, to university and school despite the bombs. They queue for hours just for bread, the barber shaves his customer by the light of a candle.

I asked a friend a while ago when did Syria last suffer such a tragedy as this? Not since Tamerlane, he said without hesitation. Damascus is the oldest continuously inhabited city on earth, it survived the Mongols in the 13th century, it will survive this.