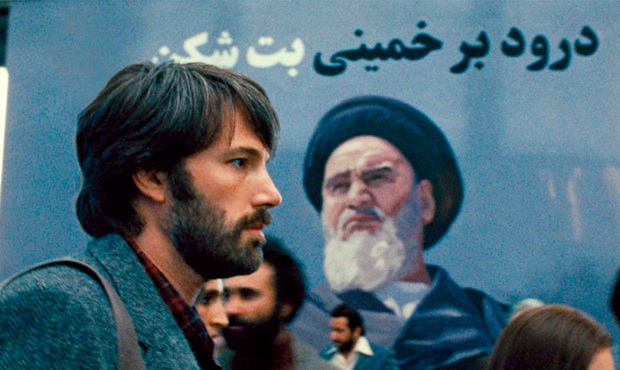 Last night, the Oscar for best film went to Argo, an action flick about the escape of five Americans from Tehran in a secret CIA operation in 1979. Iranian film critic Omid Habibinia describes his point of view about the movie.

Both Americans and Iranians anticipated the arrival of the film Argo. Perhaps Iranians were somewhat afraid of how they would be depicted. Just like Rocky and Rambo, Argo was made as a compensation for a horrendous mental breakdown in American contemporary history, and carries the same polarized atmosphere. Thus, confronting this film is a bit different for the Iranian audience whose lives are politicized in all aspects.

Many Iranians, after watching Argo recalled the film “300“, which depicted Persians as ugly black rapacious beasts. Yet the issue is not just that the Iranians in this film are nervous, ugly, dark-skinned, fat and mischievous, with the exception of one of them (the housemaid of the Canadian ambassador in Tehran). After finally putting on a red scarf, she takes refuge in Iraq and at last we are meant to understand that she wasn’t a bad person, while the rest of them are just the same as any depiction of “the other” in Hollywood films.

The distortions and numerous unrealistic flavors are made to develop more suspense in the portrayal of one of the most controversial CIA operations in Iran in the last half century, which of course for the Iranians wasn’t as significant as Operation Ajax, the coup d’état against the popular government of Dr. Mossadeq and subsequent restoration of the fugitive king with the help of plug-uglies related to the mullahs and the Imperial Army.

Argo is a film, like many other factory productions of Hollywood, which exacerbates the perception of “the other”, a term reminiscent of colonialist discourse. This is today so close to the conventional and polarized approach of the American mainstream that taking a negative position against this film has in fact united many Iranians from different camps within Iran’s domestic political sphere.

Sarah Shourd, who was held hostage by the Islamic regime just like the American diplomats, also points out that the portrayal of most of the Iranians in this film neither corresponds with the objective reality nor with the temporal reality.

It’s understandable that Hollywood needs to represent its heroes as fairy godmothers emerging from heaven against followers of evil in order to dramatize and mythicize the rescue of oppressed American hostages.

But when we refer to the existing documents, neither now nor even at the time that anti-imperialist enthusiasm was dominating the country, far from all Iranians shared the same approach towards the hostage taking.

Hollywood’s dramatization and exaggeration is not just limited to adding some flavor to increase suspension and thrill, as was done in the case of the scene of a dramatic fake execution of hostages or the use of the rescue formula at the scene in the airport. Dramatization and exaggeration have gone so far as to make both scenes seem foolish when one considers the objective logic: there’s no reason to scare hostages who are in captivity and it’s not clear why the Iranians don’t use their American jets to force the pilot to return or, even easier than that, why they don’t simply order him to turn back.

The contest between Iranian mullahs and US republicans was taking place behind the scenes of this hostage crisis, both of which were trying to take advantage of the situation for their own benefit.

The Soviet Union and Tudeh party got the support of some clergymen who needed their help for international support and to conquer the opposition.

But about United States there were many different surmises over these years.

For example, Banisadr, the first president of Iran, who has been exiled in Paris for many years, said that Republicans in the US who had established secret relationship with clergymen in Iran and later in the war between Iran and Iraq were thanked for their services with direct negotiations even in Tehran and also with dispatching arms.

If we put aside how much the hostages, who spent 444 days in solitude, and their families suffered, the Iranian people are those who suffered the most when the Mullah’s dominated following the hostage taking, with violent suppression of opposition parties, slaughter of political prisoners, war and consolidation of the Islamic Republic’s governance of Iran for several decades.

Ma’soomeh Ebtekar, a hostage keeper who has become a reformist and discussed Argo in a post on her weblog, claims the film doesn’t confess what a heavy cost the crisis had for the Iranian people who were the main puppeteers.

However one of the most important features of the film, which makes it entertaining, is its satirical tone, which somehow recalls Tintin comic strips: a CIA agent in the role of a producer of a Sci-Fi movie full of aliens and UFOs arrives in Tehran, a city full of rough, primitive, and vicious people and is going to fake six American embassy staff to be members of his production crew. One would expect that the American view of Eastern countries should naturally be something like this! The image is exactly the same as the stereotype of comic strips that were favorites of teenagers in previous decades.

Maybe that’s why these kinds of films, which are about Iran – there aren’t that many yet – provoke rage and hatred in most of Iranians despite their differing political standpoints. They find a primitive and rough image of themselves in the film. This happened in the case of “Not without My Daughter” and in “300”. These were stereotypes akin to comic strips, which enraged Iranians, especially those in the US who were forced to call themselves “Persian” rather than “Iranian”, in order to avoid discrimination.

Argo is a representation of Hollywood’s power to present reality and shows that it’s possible to make a film with an actual event as a pretext for stereotypical storytelling, which audiences are accustomed to and nothing more.

In the scene when the US Secretary of State asks the head of the CIA, “you don’t have a better bad idea than this?” He answers, “This is the best bad idea we have!” It seems that Argo might very well be the best worst film Hollywood could make about the US hostage crisis.