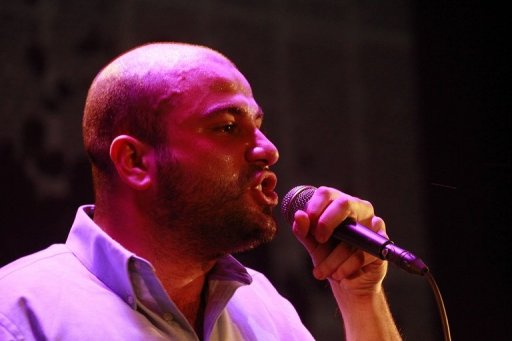 Sitting on the fringes of upheaval in the Middle East, Lebanon’s capital Beirut has become the scene of experimental music-making by Khat Thaleth, a group of rappers out to take the revolts that started during the Arab Spring to the next level.

The collective has members from around the region — ranging from Tunisia, birthplace of the Arab uprising, to the Palestinian refugee camps of Lebanon — and vocalises the realities of a new generation carrying the baggage of the past.

Khat Thaleth literally means “Third Track”, a metaphor for an alternative take on the polarised societies and politics of the region, and a reference to the Hijaz Muslim pilgrimage railway which once connected the Arab world.

“We’re not doing rap. This is not the same as American or French music; it has to do with our culture, our history,” said Al Sayyed Darwish, a member of the Syrian trio LaTlateh.

The 24-year-old from Homs, known as the capital of the Syrian revolution, said the protests which have swept the Middle Eastern region since 2010 lit the fuse for the collaboration which he describes as “a first of its kind”.

“People and the street are so far ahead of us… We need to catch up with them,” Darwish told AFP.

As Syrian hip-hop developed alongside the nearly two-year-old revolt against the regime, “people started to listen… and it became more direct,” he said.

On the morning of a concert in early February to plug the rappers’ album release, Darwish said he was well aware that much of the audience would be expecting the Syrian rappers to speak of the struggle in their country.

“It’s a big responsibility that you have 250 people (at) a concert,” he said.

“And they are expecting you to give them something to relieve them… So it’s a big responsibility, a big pleasure and a big honour for me to be a representative for my people and my revolution.”

Though the Khat Thaleth artists come from similar backgrounds, they do not shrink from belting out sharply divergent views — even on the same track.

On “Souret Soureya” (Verse of Syria), El Rass, who hails from the northern Lebanese city of Tripoli, goes head-to-head with Paris-based Lebanese artist Hamourabi on the Syrian revolt.

“El Rass is talking about the revolution and how the rebels are moving, and Hamourabi is saying they are terrorists and it’s a conspiracy” yet “they are on the same track, and it’s great to have this diversity,” said Darwish.

“We would love to show people that you don’t have to kill each other for having different points of view.”

And those points of view cover some big subjects.

In the song “E-stichrak” (Orientalism) — borrowing the title of the Edward Said book that said Western caricatures of Islamic culture were used to justify colonialism — El Rass and El Faraai, a Palestinian-Jordanian, bemoan a modern form of imperialism.

“They brought the dumbest American to come teach me my human rights… while a Sudanese engineer gets stopped at the border and thrown in a cell,” the lyrics go.

They rap: “Don’t keep telling me about the colonisers and occupiers. Look how (well) they treat each other, the ones you despise. Then look how we deal with each other and start to be jealous.”

The raw poetry of the young rappers has earned them a devoted audience since the start of the project in March 2012.

At the concert, fans say the artists get right to the heart of the issue.

“They speak about the pulse of the street and social themes… Their goal is to better the current situation,” said 29-year-old Hassan, a videographer.

“French rap or American rap doesn’t talk to me or represent what I feel or live. But when I heard Arabic rap, it really spoke to me,” said Mira Minkara, a manager at the Beirut Arts Centre.

Chef Mohammed Sayyed said he went to the concert to hear the rappers’ take on current events in the region.

“They sing about our fears, about the politics, the things we always think about — they are the ones who say it out loud,” said the 26-year-old.

As they perform “Min al-Awwal” (From the Start), the Touffar duo from Lebanon’s Bekaa Valley warn the audience not to be complacent about change the Arab revolution has brought.

“There are thieves making a living from the revolution, and other thieves waiting in line. The victory of the revolution takes two revolutions: One against the regime strangling freedom, another against those awaiting its victory to steal,” they blast.