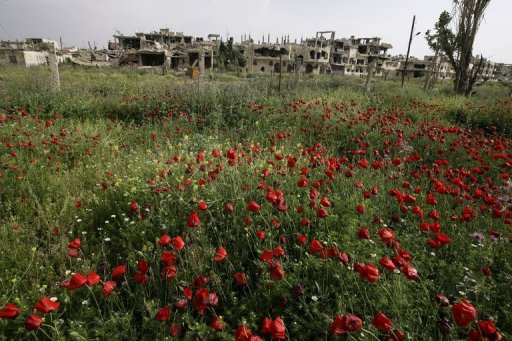 Syria insurgents launched a surprise dawn raid Sunday to retake a key district of the central city of Homs, as Islamists set up a religious council to administer rebel-held areas of the oil-rich east.

The assault on Baba Amr district came as UN High Commissioner for Refugees Antonio Guterres warned that the number of Syrian refugees, which has already passed the million mark, could double or triple by the end of the year.

Activists said the raid sparked fierce fighting on the ground and saw President Bashar al-Assad’s forces call in air strikes in a bid to repulse the rebel fighters.

They said the attack was a bid to take pressure off other rebel-held areas following the launch last week of a widescale army offensive in Homs, which has been dubbed ‘capital of the revolution’ against Assad’s forces.

Regime troops seized Baba Amr from rebels just over a year ago after a bloody month-long siege that left the district in ruins and claimed hundreds of lives, including those of two foreign journalists.

“We announce the ‘great victory battle’ to liberate neighbourhoods (controlled by the army), namely Baba Amr, and ease the pressure on our comrades and on besieged Homs districts,” a rebel said in a video posted on the Internet.

Omar, an activist who is in touch with the insurgents, said rebels infiltrated Baba Amr under cover of darkness. “Those manning the army checkpoints barely had time to realise what was going on,” he said.

The Syrian Observatory for Human Rights said troops sealed off several streets around Baba Amr amid shelling and clashes in the district, with air raids following hours later.

The watchdog said at least 49 people were killed across Syria on Sunday, including 11 soldiers in Baba Amr.

Days ago the army, which controls around 80 percent of Homs, Syria’s third-largest city, launched an offensive to reclaim Khaldiyeh in the north and other rebel enclaves in the old city, using helicopters to bombard the neighbourhoods, which have been besieged for eight months.

In the oil-producing east, where rebels hold large swathes of territory, insurgents including the jihadist Al-Nusra Front have set up a religious council to administer police, judicial and emergency services in the area, the groups said in a statement.

“God commanded the Islamic battalions to form a religious council in the east to administer the affairs of the people and fill a security gap,” said the statement, distributed by the Britain-based Observatory.

Video footage showed a convoy draped with black flags bearing Islamic inscriptions in the Deir Ezzor area and rebels attaching a banner to a building in Mayadeen, on which is written “Religious Committee of the Eastern Region.”

Unknown before the uprising, Al-Nusra Front since mid-2012 became the spearhead of the insurgency ahead of the mainstream rebel Free Syrian Army.

The jihadists, who have claimed responsibility for suicide attacks, have made no secret of their aim to see Syria become an Islamist state.

Syria’s opposition National Coalition for the second time in weeks postponed talks on the formation of an interim government, a senior member of the opposition grouping said, citing “deep rifts” on the issue.

The meeting was initially scheduled for last month in Istanbul but was postponed until Tuesday this week. It has now been delayed again, with a possible new date between March 18 and 20, said Samir Nashar.

“There are too many opinions… and this calls for more time and more consultations,” said Nashar.

Guterres told reporters in Ankara that if no solution is found to the bloodletting the number of refugees could greatly multiply.

“Now if this escalation goes on and nothing happens to solve the problem we might have in the end of the year a much larger number of refugees: twice or three times the present level” of one million, he said.

Many refugees are living in dire conditions in camps across Syria’s borders, with officials in Jordan on Sunday reporting that a man was killed in a fire that swept through his tent during the night at the Zaatari camp. Two of his children were seriously injured in the blaze.