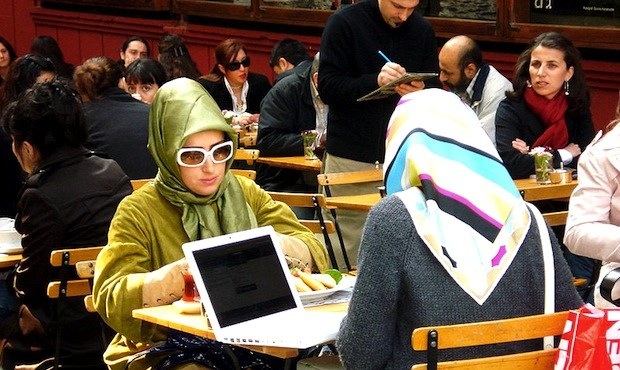 During the so-called Arab Spring, it was especially the young people who took to the streets. Soon, Erdogan’s AKP-ruled Turkey was considered a model for political renewal in Tunisia and Egypt. However, the flagship state has one flaw: its youth is not interested in politics.

Faik Tunay is an unusual Turkish politician. The parliamentary deputy criticizes his own party, the leftist Republican People’s Party (CHP), vigourously, even in public. He does not conceal his political past in the center-right oriented Motherland Party (ANAP), and in addition he speaks openly about his own ambitions as an entrepreneur.

But it’s another attribute which distinguishes Faik Tunay very clearly from the other members of the Turkish parliament: He is young. By 31, he is among the youngest members of the Turkish Parliament; the vast majority of his colleagues are several decades older. While the youth in Tunisia and Egypt is struggling for their rights and political participation, the number of aspiring young politicians and the interest of young people in politics is limited.

“Many young people in Turkey are not interested in politics, many times they do not even want to discuss political issues,” says Faik Tunay, “and they are not encouraged to do it.”

Still, many families express concern if their children develop a political interest, explains Tunay: “Since the military coup in 1980, political commitment is considered as dangerous, you rather stay away from politics.” When he started his own political career in 1999, his mother first tried to stop him from being active in politics. “Nobody in my family is involved in politics, but after the initial worry, my parents are now supporting my work.” Tunay regrets that the generation born after 1980 is so reticent when it comes to politics: “Turkey has 75 million inhabitants; half of them are younger than 35 years. The dynamics of the young people is the most important potential of Turkey, and it is wasted!”

Criticism is not desired

More than 30 years after the military coup, the fear of political and social activism in Turkey is still noticeable. Under the leadership of Kenen Evren, the Turkish military took drastic measures in September 1980: All political parties were banned, as well as unions, associations and foundations. With constitutional amendments, some of which are still in force, the military ensured a sustainable de-politicization of the Turkish society. People who had been politically active before the coup became subject to a ban to stay away from any political activities for up to 15 years. 30,000 political activists had to leave the country and about 500 death sentences were pronounced.

The control of the military reached private life: hundreds of movies, books, and even words were banned because of their suspected political connotation. The currently effective 10 percent threshold to enter parliament dates from this period.

Mert Kayhan, director of the Turkish NGO “ARI Movement,” considers the 10 percent threshold as one of the reasons for the lack of political interest among young Turks: “This hurdle has strengthened the numerical superiority of the AKP more and more. Few parties can establish themselves next to it, and once they did it, they are trying everything to keep their position.”

The resulting stagnation keeps young people away from getting engaged in politics. Kayhan understands this reaction: “15 parties fought the last elections to get into parliament. The three established parties AKP, CHP and MHP have won more than 90 percent of the vote. The other twelve parties did not even get percent of the vote. This makes serious political work not very attractive.” According to Kayhan, the youth organizations of the parties are primarily established to recruit new members and for the procurement of “human capital” which can be used for the election campaign. “Criticism of the young politicians is not desirable,” says Kayhan.

Cautious steps into the opposition

There is a lack of political awareness in Turkey, says Kayhan: “Today, Turkey is a country without a pronounced civic engagement and without political culture. Policy is perceived as a consumer good – as something that you can criticize, but at the same time as something that you cannot influence or change.” With his NGO, Mert Kayhan organizes regular events where young people are encouraged to participate in policy discussions. Last year, Kayhan and his staff toured around Anatolia with the project “Political Café.”

Kayhan and his colleagues invited the young residents of small towns and villages to political discussions. Like Faik Tunay, Mert Kayhan sees the apolitical attitude as a result of many years of de-politicization of Turkish society by the military after the coup in 1980. The generation of people in Turkey under 35 was raised with the idea that political commitment is dangerous – or pointless. As one of the most important measures to rekindle the political interest of the youth, Kayhan called the reduction of the 10 percent threshold, “This would make the Parliament more diverse and more open.”

Furthermore, the Turkish minority policy had to change, calls Kayhan: “Ethnic and non-Muslim minorities still feel excluded from Turkish civil society and politics.” If Turkey’s official policy was more open to minorities, their young members could develop a greater interest in politics.

According to Faik Tunay, the parties and the government have to react: “The youth was considered as a threat by the Turkish government for many decades; their political consciousness has not been encouraged. The potential of the young generation must finally be recognized.” As usual, Tunay does not spare his own party, the CHP: “The CHP is the oldest Turkish party – and has not been part of the government for 30 years. One of the main reasons is that the party has failed to integrate and to establish young people and women in their own ranks.”

Under the leadership of the new party leader Kemal KÄ±lÄ±cdarolu who took over in 2010 there are at least more young employees in the administration of the CHP, says Tunay. “Still, this is not enough, but the party makes more and more steps in the right direction,” says the young deputy, “I am optimistic about the future.” A future of a parliament in which being young won’t be an extraordinary attribute.