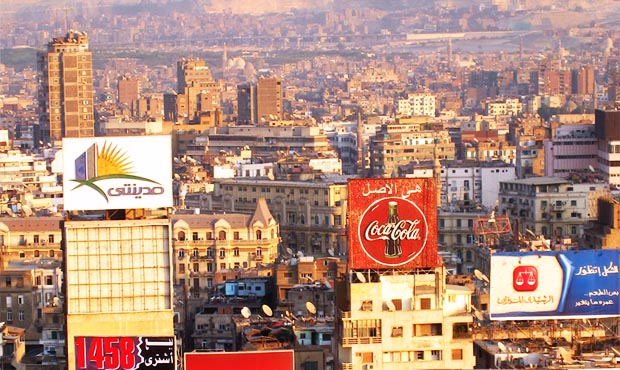 For decades, the contours of the Cairo skyline have been lit up by night with numerous billboards towering over the city’s bustling thoroughfares. A familiar face in the mix of these advertisements is Coca-Cola.

Historically, Coca-Cola has struggled in the Middle East, in particular with the Arab League boycott of the beverage from 1968-1991 – a punishment for the company’s business in Israel. But even in a staunchly anti-American country like Iran, the brand’s close association with American values has not stopped the drink from reaching thirsty consumers in the region.

With over 30 brands, including Fanta, Schweppes and Dasani, the latter of which produces bottled water, Coca-Cola caters to more than just the carbonated beverage industry.

Egypt is Coca-Cola’s largest market in the Arab world and one of its oldest operating sites, having first been opened in 1942. It was followed by the establishment of a Moroccan operation in 1947. Egypt serves as the headquarters for the US soda giant’s North and West Africa Business Unit.

Though Egypt has witnessed some economic difficulties since the revolution of January 2011, including a slump in the tourism industry that comprises a major income source for over ten percent of the working population, Coca-Cola’s operations in the country remain as strong as ever. However, the company was not completely spared difficulty during the unrest.

“These obstacles were clearly logistical,” said Dana Bolden, the Group Communications Director for Coca-Cola’s Eurasia Africa Group, headquartered in Dubai. At the peak of the unrest in Egypt in January 2011, trucks could not move around the city and Coca-Cola shut down their offices and operations for several days just before former Egyptian president Hosni Mubarak’s resignation on February 11, 2011, reopening soon after.

Despite issues of mobility and personnel security, Coca-Cola was quick to bounce back in Egypt after the political unrest. Other country-specific operations in the region affected by the political fervor have not been as quick to recover. In Tunisia it has been fully restored, but the Libyan operations have only just begun to function again after being forced to close for some time during the upheaval. Operations in Syria are completely shut down until further notice.

In fact, the unrest in Egypt has actually led to a positive outcome for Coca-Cola’s business in the country. The situation served as a catalyst for activating new marketing campaigns.

“We tapped into the psyche of our Egyptian consumers”, explained Mr. Bolden. The company used the notion of “building a future together” by making an effort to portray itself as improving Egypt as a whole. The outcome of the unrest has created an opportunity for Coca-Cola to engage in what Mr. Bolden calls “cultural leadership”.

Examples of successful initiatives which gained momentum by way of the “revolution” include Coke Studio Middle East, a music television series fusing Arabic and international artists and perhaps the most famous of the company’s recent marketing initiatives.

Originally piloted by Coca-Cola in Brazil, and subsequently in Pakistan, this effort in the Arab world alone has been credited with increasing sales of Coca-Cola to levels higher than before the Arab Spring. According to Coca-Cola, Coke Studio Middle East targets the Arab youth with the “aim to inspire through introducing them to different cultures, histories and life journeys…” by exposing them to the notion of new “possibilities” through the music produced by such collaborations.

“We had a big opportunity here to create an emotional connection”, Mr. Bolden added.

Another successful campaign that Coca-Cola launched in Egypt in the midst of the post-January 2011 political instability is known as Crazy for Good. According to Ghada Abdelhamid, the Public Affairs and Communications Manager at Coca-Cola Egypt, the purpose of the campaign is two-pronged: its launch coincided with a decrease in public morale attributed to the instability in Egypt after the revolution, and is therefore intended to inspire the masses while increasing Coca-Cola sales and brand awareness.

A series of videos were uploaded to Coca-Cola’s YouTube channel which summarize the notion behind this particular campaign, which is to motivate people to perform random acts of kindness in order to contribute to the greater good of humanity. The YouTube ad which embodied this campaign, posted in early January 2013, has already generated 2.6 million views in addition to its presence on TV advertisements on Egyptian and Arabic TV.

The campaign simultaneously serves as “Phase 1” for Coca-Cola’s new communication strategy in Egypt, which pushes the public to consider what good they do in their own communities as a means of highlighting what good Coca-Cola does for its local communities.

“We had encountered a challenge in communicating (with the masses), but (through Crazy for Good) we succeeded in bridging this challenge”, remarked Ms. Abdelhamid.

As for more tangible CSR initiatives, Coca-Cola hosts a multitude of initiatives and projects, from the local to regional level. It recently launched the MENA Scholars Program, a yearly program designed to encourage entrepreneurship amongst the region’s youth. Coca-Cola sponsors students from across the Arab world to attend the Kelly School of Business at Indiana State University for an intensive, month long training in entrepreneurship. Students were selected based on the integrity of their ideas and proposals, which were voted on by their peers through social media outlets such as Facebook.

Graduates of the program return back to their markets with tools and international contacts whose purpose is to aid them in the implementation and sustenance of their ideas. Proposed projects have dealt with issues such as tackling unemployment, developing infrastructure and industry and improving the efficacy of land. Having just graduated 98 scholars this last year from Algeria, Egypt, Palestine, Tunisia, Morocco and Jordan, the program is expected to be a major success, stated Mr. Bolden.

Coca-Cola has numerous other initiatives in Egypt that it has been pursuing as part of their general corporate social responsibility strategy, the majority of which far predate the Arab Spring. All of these efforts are part of an overall corporate-level CSR strategy of developing poor communities and giving back to the communities where the company operates.

“(Coca-Cola Egypt) implements a holistic development strategy that focuses on all parameters of development,” stressed Abdelhamid.

The projects include creating safe water sources, upgrading infrastructure of roads, administrative buildings and education centers in rural villages, improving other basic infrastructure as well as promoting entrepreneurship among women.

Coca-Cola also makes an effort to ensure that it is invested in the local community from a production perspective through its partnerships with local bottlers. Such local bottling partners are an integral component of a successful operation and help Coca-Cola to develop the brand awareness and loyalty within each community of operation.

In Egypt, for example, Coca-Cola has nine bottling plants that directly employ 12,000 Egyptians. For each direct employee, the company claims, there are ten additional jobs created within the community and a family sustained. According to Coca-Cola’s fact sheet on the Arab world compiled in 2012, it provides livelihoods for 500,000 families in the region by directly employing 40,000 Arabs.

The emphasis on the relationship between Coca-Cola and the community it operates in is what is referred to as the “foundation model”, which donates 1% of their operating revenues to fund its namesake foundation efforts. The Coca-Cola Foundation distributed over $690 million in international grants and sponsorships between 2002 and 2010 to communities it operates in.

In contrast to its CSR initiatives, the US beverage giant has been embroiled in several controversies in the Middle East. Perhaps the most famous is the Arab League boycott of the company from 1968-1991 in response to its expressed interest in opening bottling plants in Israel.

Meanwhile, controversies specific to the Egyptian market have arisen at several points in Coca-Cola’s history in the country, beginning in 1961 when the label on a Coca-Cola bottle, written in Amharic – a Semitic language spoken in Ethiopia – was misinterpreted by an Egyptian government employee to be Hebrew. His accusation was made public and caused some upset in the Egyptian market, prompting a swift response from Coca-Cola saying that it did not, and would not do business with Israel, explaining its reasoning in strictly economic terms. At the time, Coca-Cola had explicitly deemed the Israeli market too small to support the franchise, although it did eventually expand into Israel as previously described.

Another case involving Coca-Cola in Egypt reappeared in the spotlight on the occasion of the Bigio family lawsuit against Coca-Cola, which was decided in the United States Court of appeals in March 2012. The Bigio family had reportedly originally immigrated from Syria to Egypt at the turn of the 20th century, settling in the Heliopolis suburb of Cairo. The family is said to have leased its land and buildings to Coca-Cola when it began its operations in Egypt in the early 1940s, while the family manufacturing companies supposedly produced product inputs for Coca-Cola.

The nationalization policies put into effect under the leadership of former Egyptian president Gamal Abdel Nasser led many businesses and real estate properties to be nationalized by the government. The Bigio family’s land, factories and companies were promptly expropriated, passing through many hands of government-sponsored ownership, all the while being used by Coca-Cola. For its part, Coca-Cola continued to do business with the various proceeding Egyptian government entities that assumed ownership of that particular plot of land, regardless of the circumstances surrounding its ownership. The Bigio family was kicked out of Egypt in 1965.

In November 2011, the Bigio family brought a case against Coca-Cola to the US Court of Appeals for the Second Circuit in New York, stating that the company had refused to compensate the Bigio family for the expropriated land despite the vast fortunes made off of the use of it by Coca-Cola Egypt. The case was dismissed in March 2012 as the Bigio family had not “sufficiently alleged that the Coca-Cola Company headquarters in the US controlled Coca-Cola Egypt”. The case gained particular attention in the Israeli media because of the Bigio family’s Jewish heritage as well as the notion that Gamal Abdel Nasser’s policies were especially targeted at the Egyptian Jewish population. For its part, Coca-Cola has argued that Nasser’s expropriation of the property was legal.

Despite these troubles, Coca-Cola has managed to ensure its existence in Egypt – and the Arab world as a whole – through its successful efforts to penetrate the markets on local and community levels, seeing and creating business opportunities no matter what the circumstance. With 58 factories in the Arab League states and an estimated outreach of 350 million consumers in the region, Coca-Cola appears to have made itself a permanent fixture in the Arab world.

“We have a different value proposition”, detailed Mr. Bolden. “We don’t view ourselves as anything but a local company.”

EDITOR’S PICK Post-Arab Spring economies: where is the growth?