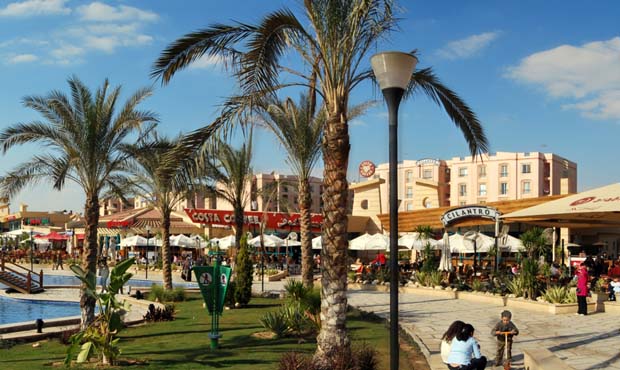 While the central neighborhoods of Western capital cities are increasingly gentrifying, the wealthy in Cairo are fleeing to “satellite cities” with aspirational names such as Hyde Park, Beverly Hills and Dreamland that promises cool, pollution-free atmosphere.

Along the state-subsidized ring road surrounding Cairo, a surreal landscape of gated ostentatious pastel-colored villas and apartment complexes, impossibly green lawns, private leisure centers, and English language international schools has been propping up in once bleak and hostile desert.

“You can get a villa for the price of a small decent apartment downtown”, explains Ahmed Gadallah, a businessman who moved from the city center in 2009. “It’s less polluted and less noisy.”

Yet Cairo’s satellite cities represent not only a shifting urban development paradigm, but also a cultural one. Here clothing styles are more relaxed, and transnational fast-food chains and shopping malls predominate, serving as a nexus for entertainment, consumption, and identity. These iterations of an idealized suburban “California dream” in the desert reflect the aspirations and fantasies of Cairo’s elite, and embody the political and economic marriage of private developers and the Egyptian state.

For most of its 1,000 year history, the hostile desert and slim fertile land along the banks of the Nile have confined Cairo’s urban development. Now, with nearly twenty million people, the Egyptian capital has spread beyond its once rigid geographical boundaries, swallowing up villages, islands, agricultural land, and expanding into the desert. It is one of the densest and most populous urban areas in the world.

This Arab mega-city is most intensely polarized not by religion, or even politics, but by wealth. Compelled by the noxious pollution, noise, traffic, overcrowding, and jarring social polarization, the wealthy are increasingly leaving the problems of the city to those who lack the economic and political resources to solve them: the poor. Beginning in the 1970s, Egypt opened its doors to foreign capital and private-sector development with the Infitah (literally “opening”) economic policies under Anwar Sadat, putting an end to the years of state socialism of his predecessor, Gamal Abdel Nasser.

While initial plans for the distribution of Cairo’s rapidly expanding population to vacant desert land were drawn up by the state, their implementation was left to the emerging private-sector developers. Vast military holdings of empty and unproductive desert lands were sold to property developers, creating a boom in construction of autonomous villa compounds, leisure centers, and high-tech business areas beginning in the 1990s.

Yet in the globalized economy that characterized Egypt in the late twentieth century, those who were left behind began to far outnumber the newly wealthy and well-connected. It is estimated that nearly three-quarters of the population of greater Cairo live in informal settlements, called ashwa’iyat, which lack access to basic public services and infrastructure.

With the gradual dismantling of the public sector as a parallel development of Sadat’s economic restructuring, and the subsequent grossly uneven economic growth and wealth distribution, ashwai’iyat became a jarring and conspicuous fixture of Cairo’s hyper-dense urban fabric. For decades they were maligned by the authorities as powder kegs of Islamic fundamentalism, crime, and backwardness.

From its advent into a medieval metropolis, Cairo’s built environment was defined by labyrinthine alleys enclosed by gates, forming haras, the storied and still standing residential quarters that have played prominently in the works of the late Egyptian author Naguib Mahfouz. The haras protected their inhabitants from strangers, thieves, and other unscrupulous outsiders. But they were also home to different classes and layers of Egyptian society. While existing social hierarchies in these communities were indeed stark, there were networks of solidarity between neighbors of different social statuses.

Traditionally, Cairo’s venerated mosques, madrasas (schools of Islamic law), markets, and mausoleums formed a nucleus around which houses, whose inhabitants were a mixture wealthy and poor, were clustered. They provided shared space for all classes of society, a rich contiguous urban tradition that mirrored the egalitarian tenets of Islam.

In the 1860s the Ottoman viceroy and ruler of Egypt, Khedive Isma’il, spearheaded Egypt’s transformation into the modern era. Isma’il’s grand ambition was to transform Cairo into a modern “Paris on the Nile”, a showpiece to impress the European nobility invited to Egypt during the inaugural opening of the Suez Canal. The swampy land along the Nile to the west of the city’s medieval core was drained, paved with wide boulevards lined with elegant European façades, and stamped with monumental squares and traffic circles.

Yet the grand ambitions of this new European quarter, and other lavish projects, came at a price; Egypt became bankrupt, leading to 70 years of colonial rule by the British, to whom the country was indebted. It was during this period that European speculation and acquisition of large tracks of land around Cairo led to the creation of exclusive residential zones separate from the native quarters. Cairo was transformed into two distinct yet contiguous cities, two worlds: one modern, exclusive, and European; the other medieval, Islamic, and provincial.

Garden City, one of Cairo’s European quarters designed by British planners and modeled after the eponymous urban planning movement, consisted of curving tree-canopied streets of sumptuous villas set among gardens. Its slightly convoluted streets surrounded the British Embassy, ensuring a sense of privacy, security, and prestige. Today the district is faded, its shabby gentility slowly succumbing to the deteriorating city.

Another colonial experiment in exclusivity was the city Heliopolis, conceived in 1905 by an ambitious and very wealthy Belgian industrialist and characterized by an architectural mélange of European and Islamic styles. Establishing the trend of the exclusive city of leisure, the suburb’s selling points were its well-manicured streets, sporting grounds, palaces (including the current presidential palace), and Africa’s first amusement park. Yet it was not completely cut off from the rest of the city; the suburb was linked to downtown Cairo by a modern tram system, which quickly cemented its desirability among both the colonial and indigenous elite.

When it was built Heliopolis was a proverbial oasis in the open desert, setting the standard for Cairo’s current satellite cities. Although Heliopolis is now surrounded on all sides by Cairo’s encroaching poverty and urban sprawl, its lush, private sporting grounds and leisure zones constitute some of the few remaining green spaces in Cairo, which has one of the lowest ratios of green space per inhabitant in the world – about the size of the palm of one’s hand.

Today, Cairo’s seemingly insurmountable problems have compelled those with money to abandon the city entirely in favor of the latest urban development trend: the new elite compounds and satellite cities. Yet, in spite of the boldness in which the proponents and developers of Cairo’s satellite cities profess to be creating a “new Cairo”, devoid of the old city’s associated problems, the reality and fundamental irony is that, at the very least, their development has instead exacerbated them.

With private automobile ownership a near-universal symbol of status for the elite and upwardly-mobile, public transit options in the satellite cities are non-existent. Billions of Egyptian pounds were allocated for the eight-lane Ring Road, perpetually clogged with commuters, which links the various satellite cities to each other and to Cairo’s core.

“If you work in Downtown Cairo like I do, you spend two to three hours daily in the car”, says 29-year-old Mohamed Farag, who commutes from New Cairo, a major satellite city east of central Cairo. “Once I leave my house I’m stressed.”

The impoverished builders and maintenance workers for the compounds, meanwhile, have little choice but to commute on expensive minibuses owned by private transportation companies.

In the outdoor food court of the mall in Rehab City, part of New Cairo, whether opting to rehabilitate themselves at the Cinnabon, Costa Coffee, Hardee’s, or the Pizza Hut, patrons can nonetheless enjoy the pristine surroundings featuring meticulously landscaped grass and trees, an artificial lake with fountains, and all the facsimiles of a Southern California lifestyle mall.

In 6th of October City to the west, the compound of Dreamland contains villas and five-star resorts surrounding a lush, palm-tree studded golf course that offers views of the Giza Pyramids. The sheer volume of water alone that is siphoned to propagate and maintain these artificial oases is fundamentally unsustainable; only 6 percent of Egypt’s land, home to 99 percent of the country’s 80 million people, is arable. A number of these compounds are barely finished or occupied. Yet new lines continue being drawn in the desert sands, the physical blueprints of future master-planned compounds that will likely fill the current gaps between the city and its satellites, forming one contiguous sprawl.

The compulsion to escape from the pressures of the modern world to imaginary utopias has long been a lucrative selling point for urban developers. Yet exclusion and isolation, particularly from the poor, has been at the core of the gradual evolution of Cairo’s urban landscape into a self-fulfilling reality where the cliché of an “Oriental” city, dominated by archaic fundamentalism, filth, and poverty, on the one hand, is contrasted with another cliché of a modern, progressive, “American Dream” lifestyle.

Whereas Cairo’s traditional hara represented the organic, yet contiguous fabric of the medieval city, its latest frontier developments reveal the now dominant paradigm of conspicuous consumption, spatial segregation, polarization, and rampant inequality. With names conjuring up images of far-flung, bucolic, and prestigious geographies, Cairo’s satellite cities and compounds reflect the desire of Egypt’s cynical elite, as well as the upwardly-mobile, to revel in luxurious escapism and desperate cultural emulation instead of confronting the worsening local reality which they themselves share responsibility in creating.

Decades of structural and social inequalities, political cronyism, and misallocation of resources have proven to be major catalysts for social disorder and violence around the globe. Yet in the wake of the Arab Spring, the fate of Cairo, and Egypt as a whole, appears inconsequential to the aspirations of the elite.

EDITOR’S PICK A new urban consciousness in the Arab world?