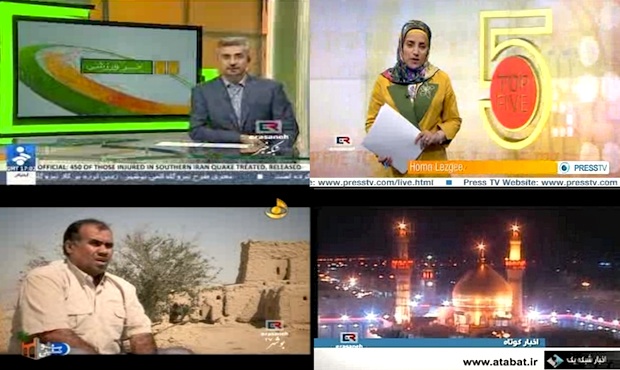 According to the latest media reports, 37 people were killed and 850 others injured in the 6.1 magnitude quake that struck Iran on Tuesday.

Despite its impact, it took more than half an hour for Persian media inside the country to begin covering the event. At that time, both Iran’s seismological center and international sources had reported what went down near the port city of Bushehr.

Remembering my experience of a previous earthquake in the Iranian region of Azerbaijan, ignored for several hours by the Islamic Republic’s TV channels, bringing waves of criticism, I started to watch Bushehr local TV. But there was no mention of the episode, not even a news flash.

The first news finally came from IRNA, the Islamic Republic’s official news agency, at 16.53, after more than half hour had passed.

More news came later by other internal news agencies and all of them mentioned that there had been no damage to the nuclear power plant in Bushehr, nearly 90 kilometers (55 miles) northwest of the quake’s epicenter, and no radioactive release.

Iran’s News TV, where I once worked, had about two hours delay in broadcasting the first news of the incident.

A few months ago, when the Azerbaijan quake happened, not only did national TV channels significantly delay broadcasts, but Tabriz TV in the province continued to run its mourning program for a Shiite saint who died about 1,400 years ago in Saudi Arabia. At the same time, people in the region needed urgent help.

President Ahmadinejad has yet to send out a condolence message for the Azerbaijan quake, stirring anger among Iranian social media users. Instead, he travelled to Saudi Arabia and also expressed his condolences to Sierra Leone’s president who lost his mother 40 days earlier. One of the IRIB heads said they did not inform on time about the event in Azerbaijan, which further attracted waves of critics toward the monopolized radio and TV organs in the country.

This kind of ignorance of people’s lives by national and local TV is unacceptable, as everybody who is familiar with journalism knows that the first duty of local media is to cover incidents such as this live; asking people how to help and explain where to go for safety. But it seems that the Islamic Republic TV is used simply as propaganda for political and ideological purposes.

Recent research show that more than 70% of the Iranian people use satellite TV and have low trust for the regime’s TV channels. Last year, I did a limited survey among students and the result was the same; most Iranians prefer to follow the news through BBC Persian, followed by VOA Persian.

The media inside the country is under the toughest censorship since the 1980s, the majority of the population does not read newspapers, magazines and books, but rather prefer to use Internet for news. Surveys show that the biggest media source inside the country, which receives a large pot of the yearly budget, ironically has the lowest trust among the public.

As I am writing this, Bushehr local TV is still re-broadcasting a programme praising a general who is blamed by the opposition for a massacre in Kurdistan in the 80s.

Omid Habibinia is an Iranian journalist and media researcher, and the co-founder of the International Association of Independent Iranian Journalists. The views expressed in this article are his own.