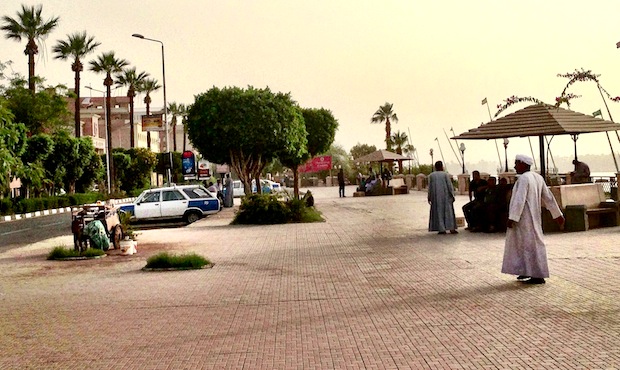 The streets of Luxor are almost deserted. It’s the Easter holidays, and the city should be brimming with tourists visiting the temples and tombs, or cruising the Nile.

Instead it resembles a ghost town: empty cafes line the streets, large cruise liners are docked with nobody on board, carriage drivers stand on the Corniche waiting for passengers who never arrive.

Entirely dependent on tourism, Luxor has suffered badly from the drastic drop in visitors to Egypt since the revolution started in 2011. Numbers plummeted from over 14 million in 2010 to 9.4 million. Two million more visited in 2012, but progress has stagnated due to Egypt’s ongoing political instability.

“This has been the toughest period for Egyptian tourism since they started collecting statistics 25 years ago,” says Amr Abdel Ghaffar, Regional Director for the Middle East at the UN World Tourism Organisation.

“It’s the result of political change, and of course that brings a lot of uncertainty over the whole economy and particularly on tourism,” he says.

Tourism is vital for Egypt: it represents 11.3 percent of GDP and directly employs nearly three million people. Heritage sites close to Cairo, like Luxor and Aswan, have been the worst hit, with hotel occupancy between 10 and 15 percent according to Towfiq Kamal, president of Egypt Hotel Chamber.

Luxor Temple takes centre stage in the town, yet on a beautiful Tuesday afternoon there’s barely a tourist in sight. Indeed, visitors to Upper Egypt’s antiquities and monuments have dropped by over 70 percent, with only 1,200 visitors maximum a day, according to Mansour Breek, Head of Upper Egypt’s Antiquities Zones.

“We depend on this money to protect and restore the monuments, to pay for the archeologists, and of course for employment. So the lack of tourism affects us very badly,” he says.

Everyone in the city has a tale of woe; from captains of cruise ships that haven’t sailed since 2011, to a travel agent who set up a furniture business to compensate his lack of earnings.

Mamdouh, a taxi driver, barely works these days and is struggling to survive. “I used to earn up to 300 (Egyptian) pounds every day. But now I’ll have one guest and earn around 20 pounds,” he says. “Sometimes my family doesn’t eat in the evening because there’s no money.”

The deluxe Steigenberger Nile Palace hotel did a roaring trade until two years ago. Sitting in its large but empty courtyard, manager Gamal Allah says the 260 rooms “used to be 90 percent booked up during Easter, but this week it’s 40 percent, even though we cut rates by half.”

How much the government is helping is debatable. Mr. Abdel Ghaffar says that despite concerns, the Islamist government “has worked hard to maintain a warm welcome to foreign visitors. But how successful they have been so far in communicating it remains to be seen.“

The Minister of Tourism Hesham Zazou recently stated his aim to reach 14 million visitors again by the end of 2013. It shows good ambition, says Nadeja Popova, a travel and tourism analyst at Euromonitor International, “but I don’t think this is very realistic, given the current political situation.”

ALSO READ A local’s guide on foot through Alexandria

A recent initiative saw the first tourism flights from Iran in three decades, but within a week they were suspended after outcry from hardline Sunni groups, angered about their Shi’ite visitors.

Government efforts have been negligible, argues Mohamed Osman, Luxor’s Vice President of the Chamber of Tourism, and it’s because the Muslim Brotherhood is embarrassed about tourism. “Some of them don’t think tourism should be welcome. They don’t kill it, but they leave it to die.”

Last year Mr. Osman visited Europe eight times to promote Luxor. “We call it ‘Luxador’, but we do it alone, with no government support.” This year he’s off to Turkey, Russia, America and Canada.

But how to counteract the constant images played around the world of Egypt’s political unrest? Plans have been mooted to live stream videos of Egypt’s tourism sites on the Internet to prove that the tourist destinations are safe.

Valerie Lafin from France is a regular visitor “but my friends think I’m crazy for coming. People watch TV and it only shows the clashes, and they think all Egypt is like that.”

Egypt has such a large array of attractions that tourism will bounce back as it has done before says Mr. Abdel Ghaffar. The Red Sea resorts are doing better than expected, with reasonable occupancy rates, he says. “If you look at the glass half full, the country managed to maintain two thirds of their clientele in the middle of a revolution, which is a remarkable achievement.”

Mr. Breek, the antiquities specialist, agrees. “Tourism never dies here. It just gets ill,” he says, laughing. “At the moment it is very sick, it’s in intensive care.”

Everyone agrees the remedy for tourism is political stability. But Egypt currently shows few signs of being able to deliver it.