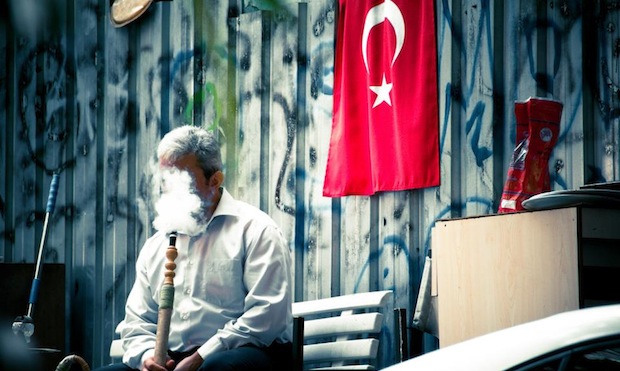 “We had to cut ties with our ancestors and pretend it wasn’t our great grandparents who were Ottomans. It was a case of collective amnesia,” writes Aslihan Agaoglu.

As I started my PhD at the department of Middle Eastern studies, I assumed that heated discussions on the Kurdish issue, Turkey’s relations with Israel, and my country’s role during the Arab Spring were inevitable.

What I did not expect, however, was to be questioned about a TV drama series dealing with the life of an Ottoman sultan, Suleiman the Magnificent, and the controversial lives of those who lived in his palace. My fellow PhD course mates, who have come here to study from various Middle Eastern countries, are absolutely fascinated with this Turkish TV series.

Indeed, Turkey has been enjoying the soft power provided by these soap operas for some time now. These shows, among many other things, underline a very specific aspect of Turkey that seems appealing to the Middle East: we are living modern lives without compromising Islamic values.

The effect of Turkish TV shows on the Middle East have been debated long enough, however, what I find quite interesting is the newfound curiosity, if not fascination, towards the Ottoman Empire in Turkey in the past few years.

I recently read an article on the BBC Turkish website that the Ottoman language is on its way to becoming a new selective course in Turkey’s high school curriculum. The news read: “Every day there’s a new course opening on Ottoman language and history. With the support of the government, this newfound interest in the Ottoman Empire just keeps on growing.”

We never had the chance to learn about the cultural aspects of Ottoman life, and we never got to understand the depth of the history of this 700-year-old empire. Our history teachers didn’t teach us about the rich cultural aspect of the empire, about the language the Ottoman’s used, the music they listened to, or the literature they provided us with.

Our lessons would then fast-forward to the Turkish War of Independence of 1923, and the revolution that came afterwards. We were taught about the reforms in language, clothing, music and the government, and the importance of Westernization. I always had a feeling that there was an unspoken rule in our history classes that, in order to embrace the change and to internalize it, we had to forget about our past. We had to cut ties with our ancestors and pretend it wasn’t our great grandparents who were Ottomans. It was a case of collective amnesia, and we were surprisingly good at it.

According to the BBC Turkish Service’s report on this new fascination towards the Ottoman language, it is mainly academics and researchers filling the classrooms to learn this almost-forgotten language and the current government’s propaganda has played a role in sparking this interest.

Moreover, the fascination with our Ottoman heritage is not just limited to the language or TV shows; it has a significant presence in almost every aspect of cultural life. A growing number of Turkish fashion designers are creating clothing lines inspired by the Ottoman women living in the Saray; jewellery created using Ottoman motifs can be found in most stores and there are now shelves solely dedicated to Ottoman literature in bookshops.

However, there’s a deeper, more profound reason behind this fascination towards our history that goes beyond nostalgia. Language is organic, it changes and evolves over time, yet a drastic transition such as ours can cause a significant gap between the different generations, that today we find hard to bridge. When asked, a man in his fifties said his reason for wanting to learn Ottoman was to be able to read his grandfather’s tombstone. This paints a fair portrait of the situation and the causality of collective amnesia.

What was the reason behind this insistence to forget one’s own history? In our history classes, we were taught that one of the main reasons behind the decline of the Ottoman Empire was the fact that the Ottomans were not able to keep up with the modernization of Western countries, in other words, their ties with the Middle East detained them from Westernising, and so the Empire collapsed. I believe this may have scarred our collective memory, and after the establishment of the new Republic, it almost became a phobia. Thus, for decades we have turned our back to our Eastern roots.

But times have changed. After years of keeping foreign policies to the necessary minimum, under the current government, the AK Party regime, Turkey is once again an active actor in the Middle East. When the Arab Spring emerged, most countries considered Turkey to be an inspiration, if not a role model, in establishing a democracy, a free market economy, and a secular state while not compromising Islamic values. It was also the AK Party who encouraged this curiosity towards our 700 year-long history.