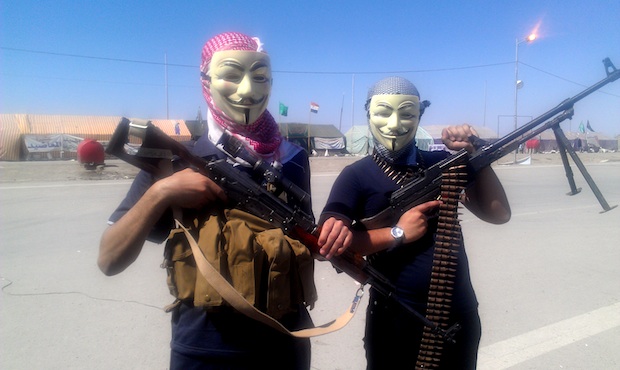 What could lead young, educated and ambitious Iraqi activists to take up arms against the Iraqi government?

At the Ramadi protest camp, a 23-year old computer science graduate took up arms after the Hawija crackdown by the Iraqi army, which led to the killing of dozens of protesters, and injured many.

Osman says music and swimming are his favourite hobbies – just another ordinary guy you might think, but this young man works with 36 other men in Ramadi, west of Baghdad. After the US-led invasion in 2003, politics has become intertwined in the upbringing of every Iraqi child.

Osman explains that he followed the movement Anonymous closely, and has participated in several online-led operations with them as part of a larger network.

From the very beginning Osman participated in the protests, with his IT knowledge, he joined the “media wing of protesters” and has been working on filming protests, uploading material on social networking sites, and documenting them. Media outlets have called these armed activists “high-school dropouts” or “Islamists with an agenda to unravel sectarianism” but Osman, the spokesperson for his group says they are protesting against the policies of Nouri al-Maliki, the Prime Minister of Iraq.

The main reason for protesting, according to Osman, is the marginalization of Sunnis, deeply rooted sectarianism, unemployment, corruption, lack of services, favoritism, foreign interference from Iran and other countries.

“We are protesting against the injustices practiced by this government against the people, especially Sunnis.”

He spoke about the imprisonment of people under article 4 of the terrorism law, which gives the government license to arrest people, as well as those in close relations with them, despite not being in association with the person’s activities. The law also allows the government to imprison people or bring witnesses that are “anonymous”. In effect, Osman says “You are tried in a court with secret evidence, and a secret witness”. This makes it extremely hard for people to defend themselves.

He went on to explain that the prison conditions, and human rights violations are horrific. “There is a culture of rape and torture within prisons. No one escapes torture, and people have witnessed so many horrific things in prison that death is an easier escape for them.”

“We are taking up arms because there are no democratic means for us to vocalize our grievances, and have them taken seriously,” Osman explained.

“We don’t have a judicial system where we can hold governmental bodies accountable, and practice the so-called ‘democracy’ that people speak about.”

He says Sunni politicians are arrested and prosecuted when they speak out against Maliki. He also warns that Western powers ignore the voices of the Iraqi public when they label democracy as a sham, simply because it will make the West look bad.

“Women participate by giving speeches or reciting poems at times,” he said when asked about the lack of female participants in protests. But there are no wide scale women-led activism because of tribal traditions, which Osman is against.

“We are a tribal society, and this is what tribal traditions say, I don’t agree with it, and we speak against it. In areas where tribal traditions are less observed women are active”. He said that he is proud of his fiancée, who works to raise awareness about the situation in Iraq anonymously.

Osman says they are not Baathists, despite what the Prime Minister claimed in a recent statement after the Hawija massacre.

“From the very beginning they have called us Baathists, I assure you these are baseless accusations.” He didn’t deny that there might be a small fraction of protesters who are Baathists or sympathize with Baathists.

“It is a revolution, we can’t control its participants, everyone is free to construct their own political views.”

The irony is that the media is irresponsible and labels movements in the Middle East as though it is a “trend”.

“The media doesn’t have a problem labeling us as Baathists, but in Libya the very same media overlooked Jihadists. It is all about what is convenient for them to report, and never about the actual cases.”

The future in Iraq remains unclear, but one thing is for sure, the government ignored peaceful protests, and armed movements are bound to receive a reactionary response in the coming weeks. Young men are taking up arms in a desperate attempt to vocalize their grievances against a government that seems like a headless chicken, unable to respond to the calls of an alienated large minority. The Iraqi government, as well as international media ignored peaceful protests that were on going for at least four months.

If the Iraqi government intends on responding to the grievances of young people, it must avoid labeling them, and start listening to them. They are part of Iraq, and no amount of prison sentence can deter them from taking to the streets.

Unfortunately, the Prime Minister on one hand calls for national unity, and on the other revokes the licenses of 10 TV channels, 9 of which were Sunnis. Consequently, there seems to be little effort on behalf of the government to be a participatory model in the call for unity, instead it fuels sectarianism through its policies.

Ruwayda Mustafah Rabar is a Kurdish activist and commentator. She blogs at @HuffingtonPost and @GlobalVoices. Follow Ruwayda on Twitter @RuwaydaMustafah

The views expressed in this article are the author’s and do not neccessarily reflect those of Your Middle East.