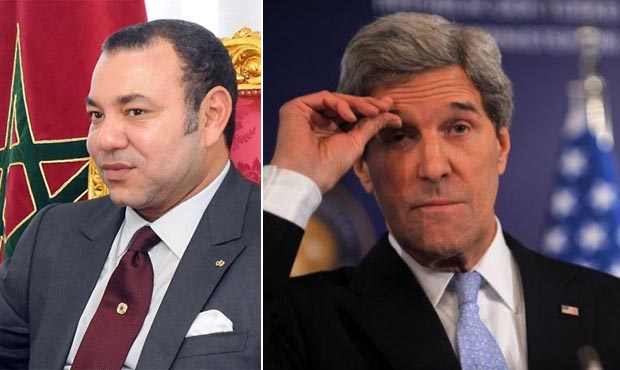 Last week, Morocco was outraged as events concerning Western Sahara took a new direction when the US put forward and then withdrew a proposal that added human rights monitoring to the mandate of the UN peacekeeping mission in the disputed territory.

During the last thirty-eight years, the conflict over the Western Sahara has been on-going without resolution in sight. This desert territory, which borders the North Atlantic Ocean, between Mauritania, Morocco, and Algeria, may look like a large empty space but it contains valuable phosphate reserves, natural gas fields, and also holds potential to drill and export offshore oil.

Western Sahara is subject to dispute between Morocco, which controls eighty five per cent of the region and claims the area as part of its territory and the Algerian backed Frente Polisario, which controls the remaining fifteen per cent.

In 1991, the UN brokered a ceasefire with an agreement that a referendum would be held on the disputed territory’s outcome; however, numerous attempts at resolving the dispute through negotiations have led to an impasse. Each year the members of the Security Council must vote to renew the mandate of MINURSO (United Nations Mission for the Referendum in Western Sahara.)

This year, the US Ambassador to the UN, Susan Rice, circulated an initial draft proposal to the so-called Group of Friends of Western Sahara, which includes the US, Britain, France, Spain, and Russia, to expand the authority of MINURSO to investigate human rights violations in the disputed territory. However, the US then did a U-turn on its proposal.

So, why did Washington suddenly change its mind? One thing we know for sure, it was not because of Morocco’s last minute decision to cancel a major bilateral military exercise, African Lion-2013, on April 16, for which the US sent 1,400 personnel and which was meant to include 900 Moroccan soldiers as well as observers from France and Germany.

For many years, the US has played a major role in Western Sahara conflict and has been a great supporter of the Moroccan position on the disputed territory, and has even on a number of occasions used its veto power to block similar initiatives that were not in Morocco’s favor. However, with the departure of Hillary Clinton, a strong supporter of the Moroccan position on the Western Sahara file and a keen defender of Moroccan initiatives in favor of political reforms and human rights, things have changed.

The new Secretary of State, John Kerry, is known for his unsympathetic position towards the issue of territorial integrity of Morocco. In 2001, Kerry was among a number of senators who wrote to the then Secretary of State Colin Powell expressing concern and calling for the application of the principle of self-determination of the Sahrawi people and the adoption of the referendum as a solution to the conflict.

The unexpected proposal from the US, which is considered a great ally and an old friend, to expand the mission of MINURSO in the Western Sahara was a harsh blow to Rabat, and has threatened to undermine US-Moroccan relations. Morocco condemned the US proposal as it sought to challenge its control of the Western Sahara. The Moroccan government spokesperson Mustapha Khalfi stressed that the US proposal was “an attack on the national sovereignty of Morocco and will have negative consequences on the stability of the whole region.”

While some sources pointed to the fact that the United States proposal was prompted by a report from Kerry Kennedy, President of the Robert F. Kennedy Center for Justice and Human Rights, who visited Western Sahara back in August 2012, and has since tried to push the US and other members of the Security Council to include a human rights monitoring mechanism within the Mandate of the MINURSO, it is very hard to believe that it was the main reason.

Washington’s proposal to change the nature of MINURSO’s mission is a déjà vu scenario of the US using the UN as a political tool to pursue its own interests in the region. Indeed, this proposal, which was referred to by a number of experts as a ‘geostrategic deviation,’ seeks to politicize this UN mechanism in a regional context subject to the growing threat of Al-Qaeda, which has succeeded in infiltrating the Tindouf camps.

Considering recent development in the region, in particular the outbreak of the crisis in Mali, with Al-Qaeda in the Islamic Maghreb (AQIM) taking over the Northern half of the country, and the hostage crisis in Algeria in January, the US has begun to view the growing Islamist threat and the urgent need to combat the spread of Al-Qaeda across the Sahara and the Sahel region.

As the US economic crisis deepens, with recent defense cuts and little help from the Sahel’s weak and ineffective governments, Washington has grown tired of fighting alone in no man’s land against AQIM. Therefore, this swift move by Washington, which alienated and angered Rabat, can be seen as a good will gesture towards Morocco’s rival Algeria, which is a strong supporter of Polisario and a partner with the means, connections and experience of fighting Islamists to help deal not only with the crisis in Mali, but also fight terrorist groups in the Sahel region.

While Morocco has usually relied on its former colonial master, France, a longtime supporter of Rabat that has in previous years resisted the pressure to extend MINURSO’s mandate to report on human rights abuses in the disputed territory and has been vocal about blocking such proposals, this year Rabat was unlikely to get Paris to use its veto power to block the US proposal.

Although, Morocco has backed the French military intervention in Mali, allowing French jets heading to Mali to fly over its territory, and has signed an agreement with France to expand police cooperation in issues such as terrorism, illegal immigration and drug trafficking, Paris can not run the risk of alienating Algeria, on whom the French are relying for support on its war in Mali.

Following Mohamed VI’s threats for the MINURSO withdrawal and seeing that two other members of the Group of Friends of Western Sahara were opposed to the US proposal, Washington was forced to back down. However, Rabat has not stopped its lobbying campaign and has continued to put more pressure on Washington, and according to some reports, Morocco has gone as far as calling on the help of a good friend with some substantial leverage over the US – Saudi Arabia.

Saudi interference on behalf of Rabat has changed the balance of power against the Algerian lobbying machine. By intervening in this matter, Riyadh is not only protecting the interests of Morocco but also its own. Having seen Morocco be praised on the one hand by US officials, including Barack Obama and Hillary Clinton as a ‘model and leader’ in political reforms and human rights in the region, and then suddenly criticized over the human rights issue in Western Sahara, Saudi Arabia was not going to turn its back on Rabat as it could suffer a similar fate in the future.

After the US withdraw its initial proposal on April 23, the Security Council adopted a resolution on April 25, renewing the mandate of MINURSO until 2014, excluding the monitoring of human rights in the Western Sahara. But this unexpected incident has shocked Rabat and created tension between the US and Morocco.

Rabat succeeded in escaping – at least this year – the expansion of MINURSO’s mandate to the monitoring of human rights in the disputed territory. Next year’s Security Council meeting to renew the mandate is probably going to be in the same vein, bearing in mind that John Kerry’s position on the issue is not going to change, the constant lobbying efforts of Algeria in the US congress, the division within the EU on the issue, and the reality that the US will not hesitate to turn its back on its friends to pursue its interests in the region.

Consequently, Morocco should learn from this incident and look to accelerate human rights promotion in Western Sahara and put forward the autonomy plan in the disputed territory.

Adra El Azzouzi is a King’s College London postgraduate, with international academic track record in Middle Eastern politics. She currently interns at ECFR as MENA Programme Assistant. Prior to that, she worked as a researcher at Chatham House.

The views expressed in this article are the author’s and do not necessarily reflect those of Your Middle East.