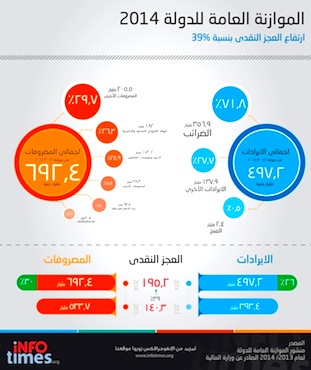 With the emergence of new journalistic practices around the world, many media institutions in the Arab world are still lagging behind and sticking to traditional journalism. In light of this, a young Egyptian journalist has launched Infotimes.

In 2011, following the Egyptian uprising, Amr El-Eraqi co-founded the Free Media Center to increase professionalism among journalists, and to train activists and bloggers on basic journalistic techniques. In November, the centre organized an informative training session for 30 journalists from different media institutions to introduce them to infographics.

But it was during a course on ‘the use of digital tools in covering issues for public service’, organized by the International Center For Journalists that the idea to establish a website focusing on infographics was first born.

El-Eraqi discussed the idea with two of the mentors, Nasry Esmat and Abeer Saady, who both encouraged him, emphasizing the necessity of such initiatives in the Arab world. In December 2012 Infotimes was formally inaugurated, with six infographs on different topics.

The plan is to gradually widen the scope of published infographs to cover the whole MENA region and to encompass more sectors, including environment and health.

Currently the startup, which is privately funded by its founder, constitutes of five graphic designers and ten journalists. Though they have no fixed office, the Infotimes team meet regularly and discuss each infograph that is to be published on the website.

“There are two considerations for deciding whether a topic is to be adopted or not: whether it is a trending subject in the society, and whether there is accessible information about that topic,” El-Eraqi explained.

“There is a long procedure before an infograph is actually published, starting with the decision if the topic is suitable, and then with journalists highlighting key information that the infograph should convey, before sending it to the designers for a first draft.”

The visual effects are also given high priority, particularly regarding the colors used.

El-Eraqi considers his choice to develop an infographics website as an attempt to move journalism in the Arab world forward and to satisfy contemporary readers. These readers are, as he describes, surrounded by digital technologies on the one hand, and, on the other, do not have the time to read written reports with messages that can be conveyed through an infograph in a clearer and less time-consuming manner.

Though he is pleased with the increasing number of visitors to the Infotimes website, and of the attention around some infographs on social media, El-Eraqi pities that major media institutions in the MENA region remain traditional and do not consider the readers’ needs in today’s digitalized world. He hopes to see more non-traditional and creative journalism initiatives in the region such as Infotimes and the Free Media Center in the future.

Bayan Itani is a Lebanese freelance writer and researcher. You find her at bayanitani@gmail.com.