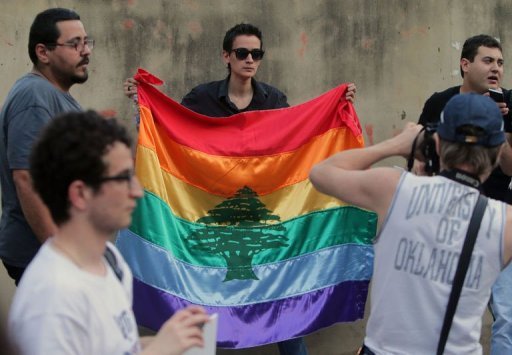 Lebanon has a reputation as the most liberal country in the conservative Middle East, but even a night on the town for gays can end in arrest and humiliating sexuality “tests”.

They might be less persecuted than elsewhere in the region, but outside a few areas of the capital Beirut, Lebanese homosexuals are largely stigmatised and discriminated against.

“If you want to be gay in Lebanon, then you’d better be powerful like Yves Saint Laurent. That’s what someone told me when I was young, and the words have stuck with me ever since,” said “Marwan”, a gay man in his mid-40s who preferred not to give his real name.

A self-made and successful businessman, his “goal in life is to lobby and overturn Article 534 of Lebanese law” which punishes “unnatural sexual intercourse” by up to one year’s imprisonment.

At a time when gay marriage is winning approval in France and New Zealand, Lebanon’s gay community feels “light years” behind.

“Can’t we just decriminalise homosexuality for now?”, wrote the “Gay in Beirut” blog after the French gay marriage vote.

“At work, if they know that you’re gay or lesbian, you can be fired without any right to protest,” said Ahmed, a member of the Beirut-based group Helem that advocates for lesbian, gay, bisexual and transgender (LGBT) rights.

The group is the first of its kind in the Arab world and works in an environment in which gays are often the focus of jokes and ridicule.

As a result, members of Lebanon’s LGBT community tend to keep a low profile, restricting their love lives to darkened cinemas and a handful of gay clubs.

But there they are often the target of sometimes brutal police action.

On April 21, police raided a transvestite bar in Dekwaneh, a conservative Christian town outside Beirut.

“The police beat and arrested several people,” said Rami, who was there at the time.

“All we want is to be able to go out for the night like anyone else.”

Some of those arrested in the operation were made to strip and were photographed, with officials saying this was necessary to determine their sex.

Dekwaneh residents put up banners praising the raid, but a group of gay Lebanese protested outside the justice ministry.

“The law is so vague that it is used at whim,” said Marwan. “It is often used by policemen looking for a quick, hefty bribe.”

“I was once stabbed 12 times. What the gang wanted was to steal my car. Because they knew I was gay, they could safely assume the police wouldn’t protect me.”

Alexandre, a 31-year-old dancer at the protest against the Dekwaneh raid, said: “How stupid is it to criminalise people’s love? Live your life and let me live mine.”

Dekwaneh Mayor Antoine Shaktoura is an example of Lebanon’s sometimes ambiguous approach to its gays.

“But there’s a society which sometimes rejects these things and… there are some things that the eye rejects,” he added.

In July 2012, 36 men arrested at a gay cinema in a working-class Beirut neighbourhood were subjected to the test, prompting protests.

But despite the obstacles they face, some gays in Lebanon remain hopeful.

“We can talk about the issue. There is greater sensitivity and the media doesn’t use the word ‘deviant’ to refer to a homosexual.”

“We are far away from the stage where we can even aim to have gay marriage legalised, but I believe we will eventually get there. It’s a question of evolution,” he said.

“It’s the only country where there are no minorities,” he said.

“If you’re Christian or Muslim, man or woman, veiled or unveiled — you’re never the dominant. There is no ‘other’ here.”