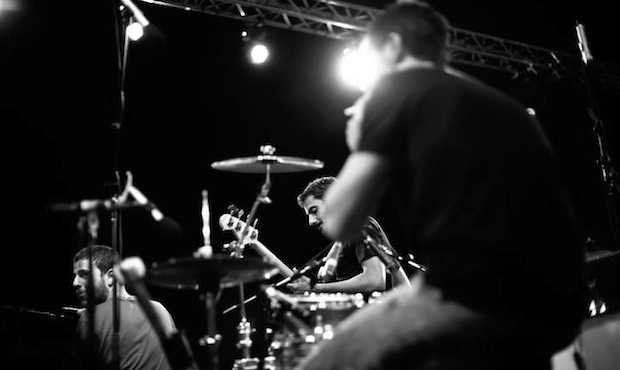 Adam Hedengren chatted with El Morabba3, the new Jordanian rock band that makes Arabic music on its own terms.

El Morabba3 is a family business; Tareq and Mohammed are vocalists and songwriters but also cousins and had worked together on various projects when they decided to set up a band that would allow them to create new sounds. They teamed up with Dirar and Odai, two brothers who enjoy playing “non-traditional grooves”.

Lyrics are in Arabic, but the sound of this emerging rock band from Jordan is anything but traditional.

They all feel strongly about the musical heritage of their region and say that there is no reason to mess with that. Rather, it is the alternative music space that is in need of a fresh breeze.

“As for the alternative sounds we felt like it lacked the characters of the place,” they said, being very particular about having a unique sound. “It is about how we as Arabs play the drums, guitar, bass, percussion and then sing over it.”

El Morabba3 tries to encourage fellow Arab artists who play alternative, fusion or just typical western music to do less covers and more original tunes. This way, “we can hear more of what Arabs sound like,” they said. Singing in Arabic is also important, if just for the simple reason that people can relate more.

El Morabba3 belongs to Amman; a city they say is special in many ways. It’s a place for Palestinians, Lebanese, Syrians, Egyptians and other nationalities to meet up in a “big Arab hug in the middle of a bunch of borders and check points.”

This allows the capital to play a pivotal role for all new Arabic styles – not just in Jordan. Also, there isn’t much commercial music coming out of the country so alternative sounds have a greater chance of reaching a wider audience here.

Inspiration, on the other hand, can come from anywhere in the Middle East.

“We live in a region that is full of intense events on a daily basis. We find inspiration on the streets, in the news about neighbouring areas that we can’t go to, in people, in other music, in dreams just about anything.”

When it comes to how local customs impact creative freedom, they agree that censorship is always in place, but that is not unique for Jordan.

“It is hard to think that anyone can write without self-censorship, that will always be true. But as far as Amman goes we have pushed it a little with our first debut album. If necessary for our content then we will push it some more.”

But then again, it is how people act and see things that inspire the band to make music.  They want to be honest about reality, which is why in a song about love the listeners may find revolutionary messages hidden in between vocals and rhythmic drumbeats.

Although El Morabba3 has a strong footing in the local environment – their second album will be “even more Arabic as far as the choice of musical scales and vocal lines goes” – they are heading towards a more electronic sound. One of their favourite Arab artists is Cheb Khaled, king of raï and master of the synthesizer.

The band is still new – their most popular song on YouTube had 25,800 views at the time of writing – so it is too early to tell if their sound is new and appealing enough to reach a very large audience. But one thing is clear; they talk about music in the way one would like music to be spoken of, as if it’s both a science and a calling. A combination of pinpointing, almost logically, how to interact with the instruments while at the same time finding chords on pure feeling and emotion.

Ultimately, however, it all comes down to the basics.

“In a more general sense, when one likes a song they don’t think of why they like it – they just feel it.”

Adam Hedengren is co-founder and managing editor of Your Middle East. You can reach him at adam@yourmiddleeast.com.