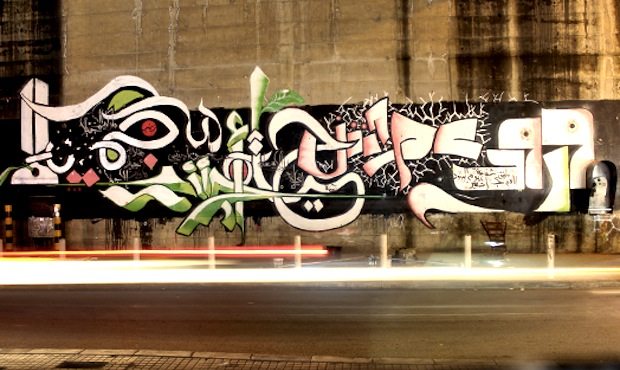 In a city described by its inhabitants as a “paradise of concrete”, graffiti in Beirut is improving the eyesight by adding more colors to the walls. Colorful paintings have spread all over the highways and alleys of the capital of Lebanon, indicating hidden talents of young artists who could not express their views in the past years.

However, the graffiti in Beirut are more than just art; they are tools to deliver messages. Beirut’s southern suburb, or Dahyeh, as the locals call it is a good example.

Dahyeh is strongly dominated by Hezbollah on the social, political and religious levels, and it is considered the “Party of God” stronghold. Almost 1 million people live here; most of them were internally displaced from southern Lebanon after the invasion and occupation of Israel in 1978. Since its establishment in 1982, Hezbollah became a very organized and robust military group that has more than 100,000 missiles and 40,000 men claiming to be well equipped and trained to fight Israel at any time. Hezbollah also has a political branch represented by its parliamentarians and ministers in the government. Moreover, the party maintains strong religious influence on its followers by using the power of the local religious institutions and clergy, as well as being the sole representative of the Ayatollah (supreme leader) in Tehran.

The Party has mastered information dissemination on two levels: psychological warfare against its “eternal” enemy Israel and mass communication directed towards its people. For this latter goal, Hezbollah profiles itself through different social, political, and cultural messages. Today, the group is using graffiti as a new tool to assert its ideals by appealing to the young urban generations, and that is exactly what is happening in the streets of Dahyeh.

“We will not lay down our arms,” reads a famous graffiti painted on one of the walls of “Hadi Nasrallah’s Bridge”, at the center of the southern suburb. This graffiti is shaped as the AK47 or Kalashnikov, a famous Russian assault rifle used by most of Hezbollah’s members. “Revolution is the language of the people here, and we make sure to express it,” said Hassan (not his real name), a graffiti artist living in Dahyeh.

“We have a role in fighting Israel, each by our own means, and I chose art, because it is by itself a revolution,” continues Hassan. Just as you walk past the first graffiti, you come across an amazing calligraphy of the words “This is Dahyeh”, which reminds you of the catchphrase of Leonidas, the Spartan warrior king, “This is Sparta!” before he threw the Persian messenger in the “pit of doom”, in the famous movie “300”.

Dahyeh survived a brutal 33-day bombing in July and August 2006, which left most of it devastated and destroyed, and after 7 years, it was rebuilt again. In the minds of its inhabitants, Dahyeh may just have become another Sparta.

“Why graffiti? Well you can think of it this way, instead of posting a picture on our Facebook walls, we are getting out of the virtual world and painting it on a real wall in the street,” Hassan said. “Dahyeh is always portrayed as a closed and violent society with no room for creativity and imagination, that is untrue, and we proved it,” finishes Hassan.

“Art in Dahyeh is generally welcomed because it speaks the language of the people”, said Mohammad (not his real name), a member of Hezbollah. “We honor our religious symbols by these paintings on the walls to remind the people of their (religious symbols) sacrifices,” he adds. Mohammad was referring to graffiti showing the names of Zeinab and Hussein, Imam Ali’s children and holy symbols in the Shiite sect.

You cannot but be amazed at the originality and artistic aspects of the graffiti. Hezbollah is taking the battle to the streets, this time using an unorthodox tactic – art. However what if the graffiti artists did not speak Hezbollah’s language? Would they be welcomed in Dahyeh? This question is yet to be answered.

The Lebanese civil war is far from over